Yoav Silberstein, 16, waited an hour and a half to get into 7-Eleven’s new flagship — and so far only — store in Israel. Located in the heart of Tel Aviv in Dizengoff Center, the store opening on Wednesday attracted throngs of mostly teenagers hoping to get a taste of America in the shape of a gallon-cup carbonated slushy called a Slurpee.

Silberstein was disappointed, though, to discover that the largest size on offer was a 650 ml (21 ounce) cup. He has fond memories of Slurpees from visits with relatives in the United States, where the largest option is twice as big.

“I overheard people in the line calling it ‘barad,’” he said, using the Hebrew word for Israel’s version of slushies. “They have no idea about any of this.”

7-Eleven is the largest convenience store chain in the United States, with nearly 10,000 locations. But it is in some of its overseas markets where the chain really stands out — especially in Japan, where the more than 20,000 7-Elevens serve up everything from banking services to clothing essentials to high-end fresh and prepared foods. There, they can function as a person’s primary shopping destination.

With the store opening this week, Israel became the 19th country to welcome the megachain, and the first in the Middle East, after Electra Consumer Products inked a franchise deal in 2021. Thirty more stores are slated to open by the beginning of 2024; the company says several hundred will follow.

The new stores will join more than 10,000 convenience stores already operating in Israel. In some big cities, including Tel Aviv, convenience stores that resemble New York’s bodegas can be found on every street corner, many of them open around the clock offering anything from cigarettes to diapers.

But the standard convenience stores known as makolets don’t serve coffee and hot food and are intended, like their American counterparts, for buying items in between larger shops at regular supermarkets. The am/pm chain of small-scale grocery stores gives off a 7-Eleven aesthetic but also does not serve fresh coffee or food. The closest things currently to a 7-Eleven in Israel are gas station stores that offer coffee and a range of sandwiches, salads and pastries, in addition to basic groceries.

At the new 7-Eleven, customers serve themselves Slurpees, Big Gulps and soft-serve ice cream (called American ice cream in Israel) as well as coffee from touchscreen machines that offer oat and soy milk alternatives at the same price. At 9 NIS ($2.60), the price is competitive locally but is still more than other 7-Elevens around the world, including the United States — reflecting Israel’s notoriously high cost of living.

In another innovation, the store’s cups have a barcode that allows customers to check themselves out. A mobile app, currently in a pilot phase, is meant to make it even easier for customers to grab and go.

Gabi Breier, one of only a few older customers at the store’s opening, hailed the self-serve, self-checkout policy.

“I’m walking around with this ice cream tub and wondering when someone is going to come and stop me and demand that I pay,” Breier said.

“It’s a new thing, this trust given to the customer. In the end, people will like it more than other places. It makes you feel like you’ve been invited.”

Asked if he thought an Israeli market might take advantage of this rare show of autonomy, Ben-Mocha was equanimous.

“Most of the kids here are getting it, but I’ve seen a few walk out of here with unpaid items and no one has stopped them,” he said. “But it’s part of the process and we’re on a learning curve too. Look, when you give the customer your trust, they will honor that.”

Israel has been an inhospitable home to some other foreign chains, notably Starbucks, which lasted less than two years before shutting its doors in 2003. Could the 7-Eleven venture be destined for the same fate?

“The problem with Starbucks was that they didn’t bother to understand the local taste profile,” Ben-Mocha said. “They just came with their own concept and tried to force it onto a market it wasn’t suited to.”

“Adapting to the local market is an inherent part of 7-Eleven’s DNA,” he said. 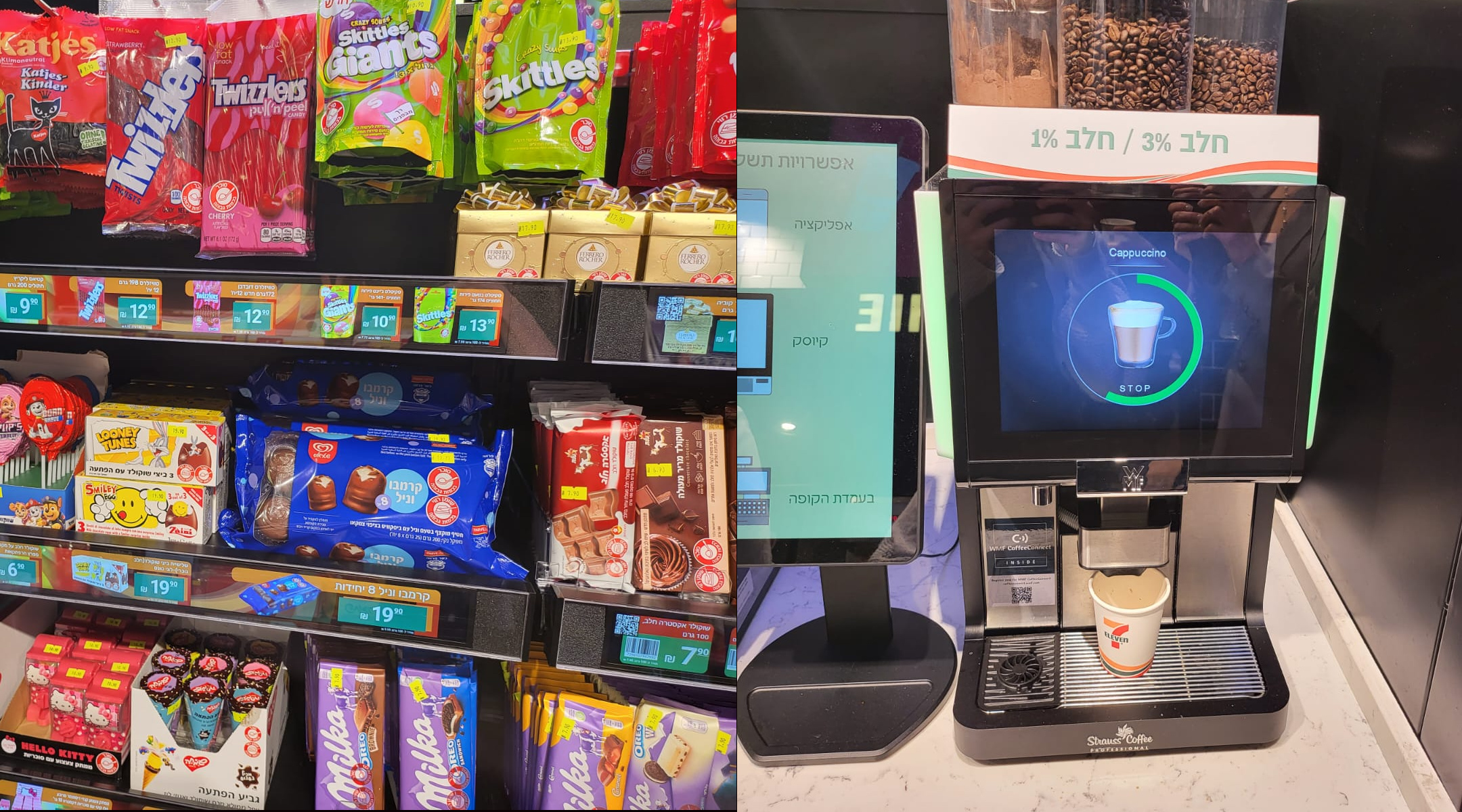 Israeli and American candies share the shelves at Israel’s new 7-Eleven, while the high-tech coffee stations are a novelty in the country. (Deborah Danan via JTA.org)

In Israel, that adaptation includes tweaks to the company’s signature operating hours — the “7” in the name refers to how many days per week the store is open — and to the way food is heated. The company initially said its Israeli stores would be closed on Shabbat, a requirement for food-service establishments that want to be certified as kosher. The Tel Aviv store’s fresh food is not kosher — it serves foods made with milk and with meat, heating them in the same ovens — but other branches will be, according to the company.

Out of around 2,000 products, just 80 are 7-Eleven branded products. Others reflect local tastes: Alongside 7-Eleven hot-food classics such as pizza, hot dogs and chicken nuggets, Israeli customers can also enjoy zaatar-and-spinach pastries and mini-schnitzels. In the candy aisle, American classics like Twizzlers and Mike and Ikes are juxtaposed with Israeli treats like fan favorite Krembo and Elite’s recently resurrected cow chocolate. And one striking import is that donuts will be sold year-round — a concept alien to Israelis, who typically only get to enjoy the fried dough confection when it’s sold around Hanukkah time.

It isn’t enough for everyone though.

“I hate this 7-Eleven, it’s totally fake,” said 16-year-old Moti Bar Joseph, who immigrated three years ago from the Bronx, in New York City. “It doesn’t have any of the real 7-Eleven feeling. There are no Lucky Charms, no Jolly Ranchers. It’s an Israeli bootleg version.”

Yuya Shimada, a Japanese national working in Tel Aviv, was more generous. Shimada came to the opening because he was familiar with the brand from his hometown of Nagoya. Asked if he was reminded of home, Shimada laughed. “No, not a bit. But this store is very stylish. I give it 8 out of 10.”

Asked whether his visit had been worth the wait, Silberstein, the teenager, said that it’s “always special to be first to something.”

He added, “But I stood four hours for the opening of the Lego store across the road so I’m probably not the right person to ask.”