Between 6,000 and 10,000 refugees from the war in Ukraine have resettled in Northeast Philadelphia since the conflict started in February, according to KleinLife President and CEO Andre Krug. Many are children who, after leaving their country of birth and early life with no advance warning, lost their sense of normalcy in a new land.

So on Dec. 28, KleinLife tried to give it back to them for a couple of hours.

From 4-6 p.m., Krug and his team threw a New Year’s party for “Ukrainian refugee children and their families,” according to a news release. There were games, holiday treats, gifts, singers, arts and crafts, cookies and more. Between 75 and 100 children attended. Each one left with a $50 gift card to Target.

“What we wanted to do is to give children kind of a festive atmosphere,” Krug said. “It’s probably the most important part of this. Give them back their childhood.”

Ukrainian refugees have resettled in Northeast Philadelphia because many existing residents speak Russian like they do, according to the CEO. They started arriving in April and May, shortly after Russia’s late February invasion of Ukraine, and “asking for all kinds of help,” Krug said. The community center, which is “inspired by Jewish values,” according to its website, decided to step up and offer that assistance to a group of mostly non-Jews.

Krug is from the Eastern Ukrainian city of Kharkiv, and his neighborhood was destroyed in the war. So he said he feels “very passionate about this issue.” And his staff does, too, as most of them are immigrants as well. Helping refugees also is in line with those Jewish values that KleinLife is inspired by, Krug said.

“The strangers came to our neighborhood, and we welcomed them,” he said. “We’re just trying to help.”

And they are helping.

In the summer, KleinLife took more than 50 Ukrainian children into a free camp program. When the school year began in the fall, the community center started an after-school program for refugee kids, also free of charge. Most of the adults are mothers since fathers are fighting in the war, so KleinLife has offered English as a second language classes and assistance with documents for school registration and work authorization. It also has connected them to the Jewish Federation of Greater Philadelphia’s food pantry and to a dental office on campus run by Temple University’s School of Dentistry. The dental care is free as well.

To pay for those services, KleinLife is raising money “constantly,” the CEO said. It is writing grants, asking the Jewish Federation for help and mobilizing volunteers. The Jewish Federation helped cover the cost of the summer camp and volunteers gathered the Target gift cards for the New Year’s party.

There is no financial planning involved here. Krug said the community center’s approach is that it will provide the service and the money will appear.

“These people didn’t choose to leave. It just happened. When the bomb hits your house, you sometimes don’t have any choice anymore,” Krug added. “It’s been an uneasy process for most of them because it’s not like they were getting ready for years or even months to come here.”

KleinLife’s new mission is not that different from the one it had started to undertake before the war. The immigrant population in the Northeast continues to grow by “leaps and bounds,” according to Krug. First-generation immigrants now make up between 30-40% of the population in zip codes that KleinLife serves. And they come from 30 or 40 different countries.

Krug expects working with immigrants to become an even bigger part of what the community center does moving forward. It’s helpful for the refugees to find so many services in one place, he explained.

There are some Jews in these groups, but not too many. Nonetheless, Krug does not plan on changing the institution’s identity as one that is rooted in Jewish values. He said that welcoming the stranger is an American value, too.

“What we’re also trying to show is this is what this country is all about. This is a country of immigrants,” Krug said. “It behooves us to help these immigrants.” ■ 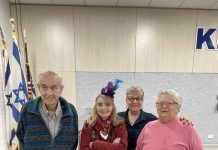 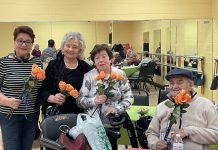