Philadelphia may not have yet seen its first snow of the season, but December brings with it winter in earnest, including the shortest days of the year.

While a 4:30 sunset might mean an earlier Shabbat, it also brings the onset of seasonal affective disorder and the winter doldrums. To relieve the cold weather scaries, artists and galleries around the city are putting on exhibits that bring levity and light to their spaces and audiences.

The Jewish Exponent has rounded up a few options for gallery viewings and events to add a little brightness to your day or weekend:

From Dec. 1-3, Ohev Shalom of Bucks County will host Elkins Park artist Mordechai Rosenstein for an artist in residence weekend, kicking off Thursday with an interactive painting demonstration in the synagogue’s lobby and concluding with workshops with Hebrew school students on Sunday, with multiple programs in between.

Rosenstein has created over 300 calligraphy art pieces that incorporate the Hebrew alphabet to create vivid designs and images.

With plenty of opportunities for audience input and collaboration, the weekend-long program gives more than just Rosenstein to show off his artistic chops.

“It’s to bring some community and some ruach and some joy into the congregation,” said Ohev Shalom Executive Director Barbara Glickman.

The Old City Jewish Art Center will kick off its December exhibit with the theme of “Light” on Dec. 2 at 9 p.m. at its First Friday Shabbat event.

The exhibit will feature several artists who have previously contributed to OCJAC and will explore “the components of light in practical terms and spiritual meaning, connecting it with Chanukah,” OCJAC Executive Director Rabbi Zalman Wircberg said.

As with OCJAC’s other themes, “Light” will draw on Jewish themes to promote a universal message, interpreted across different mediums and from Jewish and non-Jewish artists.

Artist Bonita Wagner will feature her piece “Dahlia II,” a large charcoal drawing that stretches about 5 feet. In the center, a black and white dahlia flower blooms.

“All of the subjects that I work with, when I draw them, I focus on how light interacts with them, with bouncing off of the surfaces of the flowers, with how those flowers absorb the light and reflect it back,” Wagner said.

Charcoal lends itself well to the theme of “Light,” as Wagner uses the medium to carve out delicate petals and leaves that appear almost translucent between thick and weighty charcoal shapes.

On Dec. 9 at 8:45 p.m. following Kabbalat Shabbat services, Congregation Beth Or in Maple Glen will host an opening reception for its newest exhibit at its Olitsky Gallery featuring the art of Elissa Goldberg.

Goldberg will display about 30 pastel landscapes, many of which are scenes from the beach.

“Her landscapes seem to be just so evocative, just so dreamy and just someplace you would love to be,” gallery curator Karen Liebman said.

Similar to the charcoal of Wagner’s works, pastel also creates brightness and contrast that are effective at conveying light and reflection with what Goldberg calls “the immediacy of color.”

A lawyer by trade, Goldberg uses art as an escape and can see her audience doing the same.

“It’s just freeing because these large swaths of color that you can just create the scene as opposed to a lot of fine detail…it’s more liberating,” she said.

Inliqiud’s gallery in the Olde Kensington neighborhood of Philadelphia frequently exhibits local Jewish artist, and their exhibit opening on Dec. 10 will posthumously feature the works of Elkins Park artist Ursula Sternberg, who immigrated to Philadelphia after fleeing Nazi Germany.

While much of the exhibit will feature Sternberg’s figure drawing and textile work, Sternberg perhaps made her biggest impact in the Philadelphia art community off the canvas as one of InLiquid’s first members and creator of a maker’s space in the 1990s. She hosted drawing classes for the community.

While the exhibit doesn’t directly address the themes of levity and light like OCJAC does, Sternberg’s approach to her art represented, in part, escapism and expansiveness that some audience members may look for in dark times.

“We’ve seen photos of her house in Chestnut Hill; it’s like literally every surface of her home, she made it her own,” said InLiquid Program Director Clare Finin. “And I think she was building a world for herself, a beautiful world for herself and one where she was safe.”

Finin suggested that Sternberg’s escapist approach to her art and home was a by-product of the instability and danger that pervaded her life. This balance can be seen in the InLiquid exhibit.

“A lot of her works kind of undulate between there being a kind of poetic sadness, but also a humorous beauty,” Finin said. 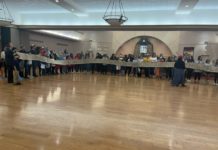 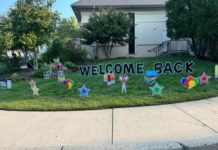 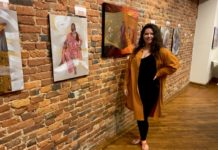