The online design marketplace Redbubble said it had “restricted” sales of a “Schindler’s List”-inspired design on its site after the Jewish Telegraphic Agency reported on a pair of leggings featuring characters from the movie that lit up the Internet this week.

“The artwork referenced in this article has been restricted and we are adding additional monitoring measures as a result,” Redbubble spokesperson Marissa Hermo told JTA in a statement.

The leggings in question, which were first spotted at a Los Angeles thrift store, sported illustrations of characters from Steven Spielberg’s 1993 Holocaust drama, along with an image of a train leading into Auschwitz. They were first posted to a popular Instagram page.

Prior to Redbubble imposing restrictions, the design was for sale on a wide variety of products, including skirts, shower curtains and iPhone cases; the spokesperson said that such items “can be seen as trivializing the subject matter.”

Redbubble allows independent designers to upload and sell their creations on its platform, which can then be printed onto a variety of products.

“With all content uploaded by third party users, occasionally there are content issues that arise that do not comply with our protocols,” Hermo’s statement said. “We proactively monitor the marketplace each day and work to restrict certain designs from specific products when not appropriate.”

How long the “Schindler’s List” products had been available was unclear beyond the fact that it was long enough for a pair of leggings to be purchased, then donated to a thrift store. The items’ original designer did not respond to a JTA request for comment.

Redbubble said it would restrict the design to be available only on “wall art,” and that any other products for sale with the design were the result of “technical issues.” But by the end of the day Thursday, all products with the design had disappeared from its site. 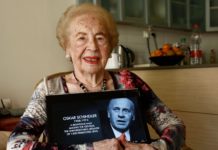