After 90 years in business, fabric store Maxie’s Daughter will shut its doors in the coming months and, along with it, terminate a symbol of Jewish life on Fabric Row that spanned a century.

It’s not just Trobman who’s had to make tough calls. Of the once 20-plus fabric stores that thrived in the now-Queen Village neighborhood in the 20th century, only seven remain, and only four are Jewish-owned.

The area’s changing prospects are met with mixed feelings from the older generation. The vibrant immigrant neighborhood of decades past is gone, but it’s been replaced with a new generation of small businesses that don’t reflect the historic fabric conglomeration that made the street famous.

“Things have changed over the years. I have pictures of how it used to be … and things change over time; people change; times change,” Trobman said.

Three generations prior, the Maxie’s Daughter building at 742 S. Fourth St. belonged to the family of Michele Winitsky Palmer, a writer whose father co-owned a wholesale textile business called Win-Tex Fabrics and a retail business called Winitsky & Company. Palmer documented the history of Fabric Row on her website fabricmuseum.org, which contains oral histories of the families who lived and operated businesses there.

Palmer’s father Louis Winitsky, like many of his generation who settled in Fabric Row, emigrated from Ukraine in 1923. His father was a tailor who immigrated to the United States 13 years before the rest of his family, and the family started their business selling schmattas from pushcarts, a popular means of selling goods in the neighborhood from 1905-’55, according to Palmer.

Many of the immigrants who settled there did so for similar reasons: to escape the turmoil of their home countries and build a new life among the rest of the Jewish population.

“They were really hustlers. They were hungry, and they built up tremendous businesses,” said David Auspitz, whose family owned Famous 4th Street Deli from 1933 to 2005.

By the early 20th century, Fabric Row, though defined by the few dozen textile businesses in the area, was a vibrant community.

“The people who worked on Fabric Row lived there with their families, so there had to be other kinds of businesses like bakeries and delicatessens, fish markets, chicken markets, all of that,” Palmer said.

As the next generation of would-be store owners grew up, they were more interested in attending college than continuing the family business, Palmer said. Even her family moved from a small apartment above a fabric store to a roomier home on the Main Line.

Consumers in the late 20th century were no longer interested in buying fabrics in the same volume they once were. Fast fashion and online stores have made clothing shopping faster and easier than ever before.

Even with competition mounting, fabric stores, now with older owners, adapted to the changing market slowly, if at all. Maxie’s Daughter has no website or online store. A single Instagram post from 2017 has three “likes,” a betrayal of the fabric store’s former role as the cornerstone of the community.

Fleishman Fabrics is one of the few textile stores with a Jewish legacy to keep afloat, a feat owner Tricia Fleishman attributes to the store’s ability to adapt to the changing times.

“We actually sort of reinvented ourselves,” she said. “We’ve been around for close to 90 years. And we used to be at Fifth and Monroe [streets], and we were a wholesale retail house. Then seven years ago…we decided to move to 4th Street, and we went from wholesale to retail.”

At the onset of the pandemic and the first wave of lockdowns, Fleishman Fabrics immediately filed for exemption and was deemed an essential business by the city. They argued that because of the personal protective equipment shortage, materials from their store could be used to make cloth masks.

As giants such as Amazon, Walmart and Jo-Anne no longer stocked textiles and elastics, Fleishman Fabrics was able to keep its doors open.

But the fabric store has also set itself apart due to the continued interest in the business by Tricia Fleishman’s son, Joshua Fleishman.

The 34-year-old joined the business seven years ago after helping the family move locations.

“I felt that was the right time to be a part of things, to kind of put my spin on where the business would head in the future and to work alongside my parents,” Joshua Fleishman said.

For the Fleishmans, the changing landscape of Fabric Row offers the possibility of new business from younger audiences drawn to the boutiques and restaurants that now line Fourth and South streets. With their business secure, the inevitable change appears less scary.

“I can’t imagine my grandfather standing here looking at glitter and sequins and spandex fabrics because back then you were in a three-piece wool or cotton suit or linen,” Joshua Fleishman said. “What would the first generation of my grandparents think? What would other merchants from this block think of the way things are today?  It’s a very fun dynamic to be a part of it. And in the ever-changing landscape, we get to be a part of new fashion.” 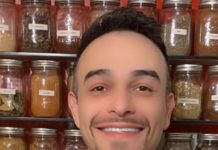 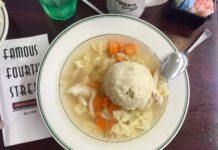 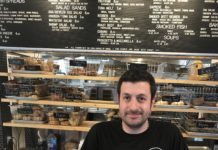