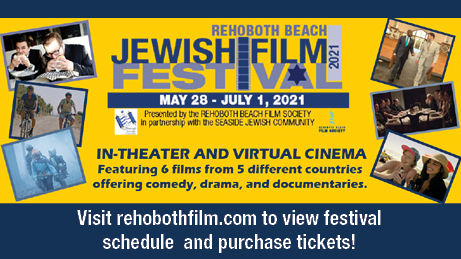 The Rehoboth Beach Film Society is pleased to partner with Seaside Jewish Community in presenting the sixth anniversary of the Rehoboth Beach Jewish Film. The festival will run May 28 – July 1 featuring one in-theater film and one virtual film each week. The mission of this event is to deepen awareness of Jewish cultures and experiences, and to explore community differences and commonalities through the art of film.

To respect the Jewish Sabbath, Seaside Jewish Community is not hosting the films on Saturday afternoon.

This entertaining documentary follows zany duo Jamie and Eli as they discover the roots of Montreal’s Jewish community. They explore the heritage of classical Jewish eateries by eating their way across the city. [2018, Canada, 62 min, Not Rated].

THE LAST SUPPER
Virtual Cinema only

On the day Adolf Hitler comes to power, the German-Jewish family Glickstein joins together for dinner. Most of them however (like so many other Germans at that time) don´t take the Nazis seriously. When young Leah reveals her plans to emigrate from Berlin to Palestine, her family starts disputing. Her father Aaron can´t see any reason to leave Germany, the country of their ancestors and the country he risked his life for during the first World War. But when Michael, Leah´s younger brother, indicates that he actually is an ardent admirer of the national socialist movement, the family is on the brink of being torn apart. [2018, Germany, 80 min, in German with English subtitles, Not Rated].

The crucial historical lessons of Black-Jewish cooperation are revisited and revived in this utterly fascinating, urgent call to action. This documentary is an insightful and timely reminder of the importance of communities coming together to denounce hate and injustice. Pivotal events come alive through a treasure trove of archival materials, narrated by eyewitnesses, activists, Holocaust survivors, and leaders of the movement, such as Congressman John Lewis, former U.S. Ambassador to the United Nations Andrew Young, Rabbi Alvin Sugarman, Oscar-winning actor Louis Gossett Jr., and members of the King family. [2020, USA, 97 min, Not Rated].

“The Crossing” tells the story of the adventurous 10-year-old Gerda and her brother Otto, whose parents are in the Norwegian resistance movement during the Second World War. One day, just before Christmas in 1942, Gerda and Otto’s parents are arrested, leaving the siblings on their own. Following the arrest, they discover two Jewish children, Sarah and Daniel, hidden in a secret cupboard in their basement at home. It is now up to Gerda and Otto to finish what their parents started – to help Sarah and Daniel flee from the Nazis across the border to neutral Sweden and reunite them with their parents. This drama is about the confidence, uncompromising loyalty and great courage you can find in even the youngest of children. [2020, Norway, in Norwegian with English subtitles, 90 min, Not Rated].

HERE WE ARE
In-theater (CAT) and Virtual Cinema
Fri., June 18 at 4 pm
Sat., June 19 at 7 pm
Sun., June 20 at 2 pm*
Wed., June 23 at 7 pm
Thurs., June 24 at 7 pm
This screening is hosted by Helen Gates.
*Guest speaker Fran McKenna will lead a post-screening discussion.
Aharon has devoted his life to raising his son Uri. They live together in a gentle routine, away from the real world. But Uri is autistic, and now as a young adult it might be time for him to live in a specialized home. While on their way to the institution, Aharon decides to run away with his son and hits the road, knowing that Uri is not ready for this separation. Or is it, in fact, his father who is not ready? [2020, Israel, 92 min, Not Rated, Hebrew with English subtitles].

A subversive love story between clashing cultures and families, “Kiss Me Kosher” is a romantic-comedy misadventure crossing all borders. When two generations of Israeli women fall for a German woman and a Palestinian man, chaos follows. What happens with lovers who don’t fit but do belong together? [2021, Israel/Germany, 74 min, Not Rated].

Admission is $12 per screening. All In-theater screenings will be held at the Cinema Art Theater, 17701 Dartmouth Drive, Dartmouth Plaza, Lewes. Purchase tickets and/or Virtual Cinema links at rehobothfilm.com. Please note that tickets are non-refundable and there will be no exchanges. Additional speaker and/or activities may be scheduled.