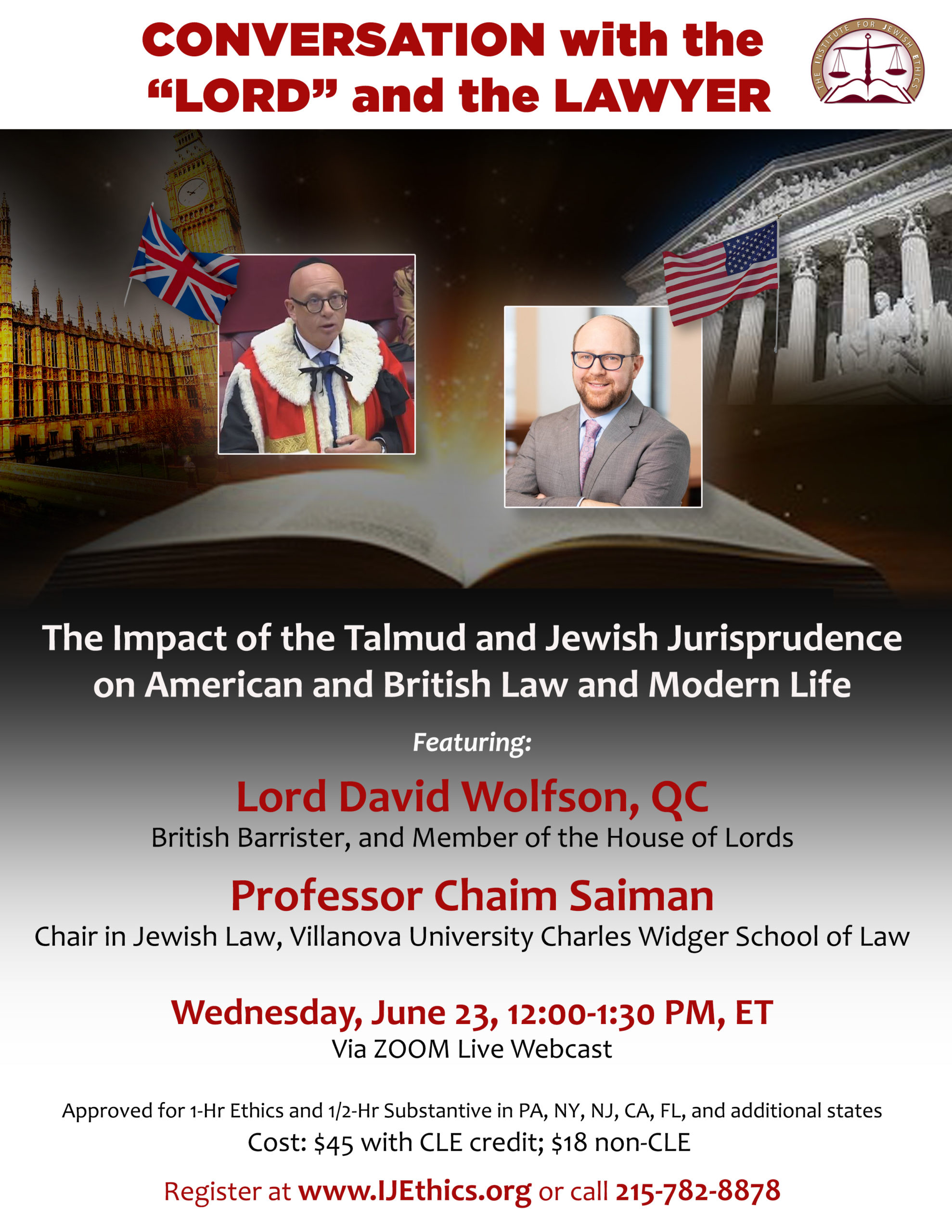 A ZOOM Live Webcast and Approved for 1.5-hrs of Attorney Credit

Speaker Bios:
LORD DAVID WOLFSON, QC, was born in Liverpool, England, and was educated at King David High School. After a year of Talmudic studies in Yeshivat HaKotel in Jerusalem, he then studied Oriental Studies and Law at Selwyn College, Cambridge. Prior to joining the Government, he was one of the most sought-after commercial Silks at the UK Bar and attracted instructions in the most complex and high value disputes. He has been instructed in many of the major banking and commercial disputes in recent years, and his practice extended over a broad range of commercial law, both in litigation and international arbitration. In December 2020, David Wolfson QC was appointed as a Government minister in the Ministry of Justice. He sits in the House of Lords as Lord Wolfson of Tredegar.

PROFESSOR CHAIM SAIMAN is a scholar of Jewish law, insurance law and private law. He has recently published Halakhah: The Rabbinic Idea of Law with Princeton University Press, and Insurance Law and Policy, a casebook on insurance law. Professor Saiman has served as the Gruss Visiting Professor of Talmudic Law at both Harvard Law School and the University of Pennsylvania Law School, a visiting fellow at Princeton University and a visiting professor at the University of Toronto, Bar-Ilan, Hebrew University and IDC faculties of law. Saiman sits as a rabbinical court judge (dayyan) with the Beth Din of America and serves as an expert witness in insurance law and Jewish law in federal court. Professor Saiman received his J.D. from Columbia Law School and studied for a number of years at Yeshivat Har-Etzion (Gush) and Yeshivat Kerem B’Yavneh in Israel. Prior to joining the faculty at Villanova, Saiman was a law clerk to Judge Michael McConnell on the Tenth Circuit Court of Appeals and worked as a corporate associate with the firm Cleary Gottlieb in New York.