Becoming inclusive is a skill that needs to be practiced year-round, and the new year is the perfect time to recommit to the practice.

Full disclosure: I love to sing Jewish songs. Israeli folk songs, camp songs, catchy melodies to tefillot (prayers); the corny and the moving alike; every time someone took out the guitar and started strumming, I was hooked. These songs were not only fun to sing, but, I believe, also instilled within me values and pieces of theology that formed the core of an identity that I would continue to develop into my Jewish adulthood. An example of one such song is Larry Milder’s “Wherever you go, there’s always someone Jewish.”  As I sang “some Jews wear hats, and some Jews wear sombreros, and some wear keffiyehs to keep out the sun,” I painted a picture for myself of a global and diverse Jewish community — one where Jewish people came in all colors, shapes, sizes and family configurations, and lived in and originated from communities all over the world.

This image, the one that we paint for our children through song and story, is often unfortunately missing from our adult Jewish communities and institutions. In many of our congregations, we still default to assumptions of Jewish status based on physical features associated with Ashkenazi (Eastern European Jewish) heritage. Sometimes, these assumptions are made consciously, as we exclaim in surprise to a newcomer funny, you don’t look Jewish?!

More frequently, though, I notice that they come out in more subtle and subconscious ways. A smaller group than usual has gathered for services on a Shabbat morning, and, though there are 10 people present, eyes dart around the room as the bar’chu approaches, looking from face to face, not sure whom to count. Most of us do not mean to exhibit these behaviors. Many don’t even notice that they have manifested, until after the fact. But the truth remains, from Mel Brooks movies to the Shabbat Kiddush buffet line, we afford insider privilege to those with dark and/or curly hair, shorter stature, large noses and light/mid-olive skin — and this prevents us from building the fully welcoming and inclusive communities that we envision ourselves as being.

Last week, I had the opportunity to hear Rabbina Barbara Aiello, the first (and only) female rabbi in Italy, speak at the National Press Club in Washington, D.C. Rabbi Aiello serves a mixed and diverse liberal Jewish community in the southern Italian region of Calabria. Hers is the only non-Orthodox congregation in the region, which means that it is not atypical for her membership to travel for many hours in order to attend services.  Although Southern Italy is not known for its large Jewish community today, Rabbi Aiello and others believe that at one point, before the expulsions of Jews from the country in the Middle Ages, that this region may have been nearly 50 percent Jewish. Rabbi Aiello has spent decades studying the Jewish history of Calabria, and how secular Calabrian customs have been influenced by the hundreds of Crypto-Jewish families still living in the region. Many of the descendants of these forcibly converted individuals (b’nai anusim) also engage with Rabbi Aiello’s congregation, as they search to rediscover their heritage.

In her talk, Rabbi Aiello called upon us to “extend the hand of Jewish welcome to everyone — even and especially those who at first glance do not appear to be Jewish." In this season of Elul, the month preceding the High Holidays, I pass this challenge on us all. As we prepare to open our doors for Rosh Hashanah and Yom Kippur, may we reflect on all of the ways in which we can extend our “hand of Jewish welcome,” noticing that, as we do so, we all become enriched by the many stories, traditions, recipes and customs of our global Jewish world. As the song teaches, “Amsterdam, Disneyland, Tel Aviv — oh! We’re miles apart – But when we light the candles on Sabbath Eve, we share in the prayer in each one of our hearts.”

Rabbi Sklover is the education director at the Germantown Jewish Centre in Philadelphia.

As Rabbi Sklover points out, the threads that comprise our Jewish tapestry are far more diverse and majestic in their colors than pop culture and modern media would have us believe. Regardless of our skin colors, heritage and ancestry, anyone might be Jewish, and we serve ourselves, the Jewish community as a whole and the spirit of klal yisrael when we make a specific effort to welcome those whom a narrow stereotype of Jewishness would have us exclude.

Bolstering Jewish inclusivity requires attention even beyond just how people look; it extends to what Jews believe, who we are and how we practice today. More challengingly, the boundaries of Jewishness aren’t unchanging. As one example, being gay and being Jewish were viewed by many as mutually exclusive a couple of decades ago, but movements toward inclusion have helped us understand how gay Jews enhance, rather than threaten, Jewish life. These benefits aside, the ever-shifting nature of definitions of what it means to be Jewish can leave us feeling unsettled and adrift, even if overall outcomes are positive.

There is no single Jewish appearance or path that fits us all, nor any guarantee of how unanticipated social or technological changes will shape our understanding of Judaism, the Jewish people, or God. Despite the disquietude that this reality may offer, the divine and the holy abound in these ambiguities, challenging us to open ourselves to varieties of the sacred that have been revealed to us.

Rabbi Goren is the Director of Repair the World, Philadelphia. 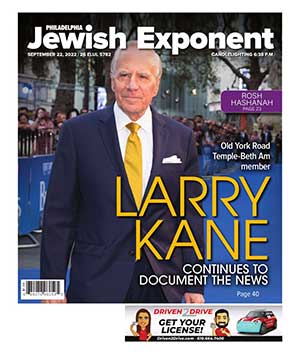