The Wall Street Journal recently featured one of my idols in its weekend “Slow Food Fast” section: Michael Solomonov’s chicken schnitzel recipe caught my eye, and I was inspired to make a version for dinner this week.

I did not use the chef’s recipe precisely for numerous reasons — none of which involved a notion that I was improving the James Beard Award winners’ technique. I did not have matzah meal, so I used panko. I did not have his recommended hawaij spice blend, but a Google search revealed that the Israeli seasoning is a mixture of the spices listed below, so I created a makeshift version. I also used an “oven-fry” technique to avoid standing over a hot skillet and marinaded the chicken to optimize the flavor.

We served this dish with a simple green salad — arugula, shredded carrots and shaved raw beets, dressed with a mustard vinaigrette.

My daughter and her friend said the meal “slapped,” which is, apparently, very high praise from Gen Z.

Here’s what I did: 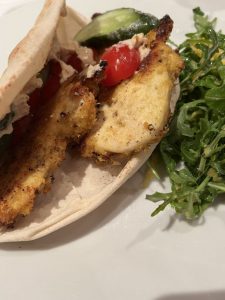 Mix the chicken and marinade ingredients together, and let them sit for 2-24 hours.
Heat your oven to 425 degrees F, and place a large rimmed baking sheet in the oven to heat.

While the oven heats, prep the schnitzel: In a large, shallow bowl, lightly beat the eggs. In another shallow bowl, mix the panko and seasonings. Dredge the chicken pieces in the egg, then the panko mixture, and place them on a plate.

When the oven is at temperature, remove the cooking tray and coat it with oil. Place the chicken pieces on the hot tray, then spray the tops of the chicken with cooking spray. Place the tray in the oven, and bake for about 25 minutes until golden brown, crispy and cooked through.

While the chicken cooks, make the dressing: Mix the tahini, lemon juice, salt and garlic. Add the cold water, a bit at a time to achieve a consistency that is spreadable but not too thick.

When the chicken is done, assemble the sandwiches — sprinkle the chicken with za’atar. Schmear the pita with tahini, add the chicken, tomatoes, lettuce, avocados, pickles, et cetera and more za’atar, if desired.