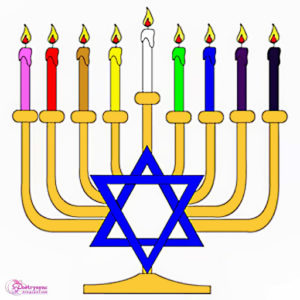 From candle-lighting and prayer to concerts and laser light shows, the Jewish Federation of Greater Philadelphia ensured a memorable Chanukah for all. Throughout the holiday, the Jewish Federation’s various departments, including the neighborhood Kehillot, NextGen and the Jewish Community Relations Council, hosted a number of events to bring the community together and celebrate the Festival of Lights.

“It was deeply moving to see how people of all different demographics and backgrounds turned out — in frigid temperatures, no less — to support one another and the community as a whole,” said Max Moline, the Jewish Federation’s director of community development. “Collectively, the Greater Philadelphia Jewish community showed once again that we are all committed to igniting and carrying the light.”

Overall, more than 1,000 community members participated in the Chanukah programs hosted by the Kehillot, a neighborhood initiative of the Jewish Federation to create vibrant communities throughout Greater Philadelphia. 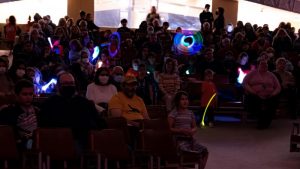 The Buxmont Kehillah hosted an event at the Horsham Center for Jewish Life on Dec. 18, where around 150 community members and residents celebrated the first night of Chanukah with singing, stories and candle-lighting. The children’s choir of Darchei Noam synagogue, along with Hazzan Arlyne Unger, gave a special performance of Jewish- and Chanukah-themed songs. Mary, Mother of the Redeemer Catholic School basketball team also attended and handed out goody bags at the end of the program. 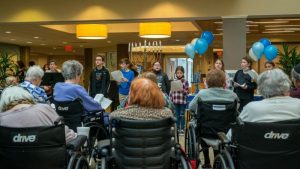 More than 160 people welcomed the second night of Chanukah with the Bucks County Kehillah at Shady Brook Farm on Dec. 19. The evening was filled with crafts, candle-lighting, music and doughnuts. 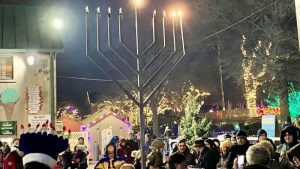 The Lower Merion Kehillah brought in Chanukah at the Narberth train station on Dec. 19. Around 50 people gathered to celebrate with blessings, songs, sufganiyot (jelly doughnuts). 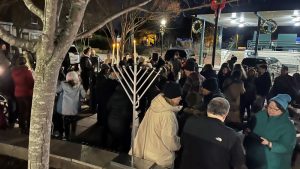 The Center City Kehillah commemorated the third night of Chanukah with a joyous and meaningful candle lighting at Rittenhouse Square Park. The event brought out more than 100 people on Dec. 20. After the candle-lighting, the Jewish Federation’s NextGen and other young professional groups met for drinks at Misconduct. 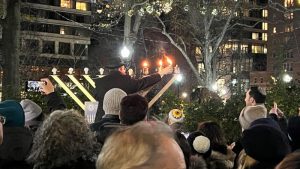 On Dec. 21, the Northeast Kehillah hosted an event at House of Kosher with more than 125 members of the community. Participants enjoyed an evening of candle-lighting, latkes, doughnuts and live music by Ken Ulansey. 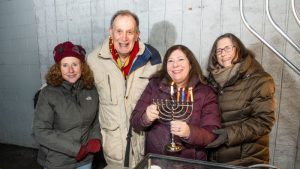 See the full roundup at jewishphilly.org/celebrate. Want to get involved in Jewish life within your community? Click here or contact Director of Community Development Max Moline at mmoline@jewishphilly.org.