Students are navigating a pandemic, schoolwork and sometimes an additional job, Anolik learned. They are concerned with environmental justice, reproductive rights, rising antisemitism and whether they or a loved one will be a victim of a hate crime because of their gender, sexuality, race or religion.

As fellowship director of Kol Koleinu, a yearlong, nationwide program for Jewish teens, particularly women and nonbinary teens, interested in feminist change-making, Anolik helps the fellows navigate and address these issues through the lens of Moving Traditions’ values of sheimut, personal well being; hesed, caring relationships; and tzedek, justice.

By the end of the year, Kol Koleinu fellows design a project to address an issue they deem important.

“We teach them transferable skills,” Anolik said. “The experience of creating a social change project that’s part of the fellowship is both an experience where they get to make change in their communities, but also where they get to reflect on that experience, and build skills like partnership: How do we work together to create change? They also build skills of self-care: How do I take care of myself?”

As a Moving Traditions leader for more than seven years and Kol Koleinu fellowship director since 2019, Anolik, a Northern Liberties resident, has done more than guide the next generation of impact-making Jews. The 34-year-old has also experienced her transformation as a Jewish feminist, learning from the teens she’s guided over the years about the “sacredness of community,” self-advocacy and the Jewish value of disagreement.

“[I’m] incredibly honored to be able to help teens be able to build those skills so much earlier in life than I did,” she said.

Before leading the Kol Koleinu fellowship, Anolik rebooted and led Moving Traditions’ Rosh Hodesh program for eighth-10th graders — a small groups mentorship program focused on “helping teens build social and emotional skills, cultivate healthy relationships and build within a Jewish community,” Anolik described. She has continued to lead her Rosh Hodesh group in the Philadelphia suburbs for about six years.

Over time, Moving Traditions wanted to enact programs with a greater social change component. Other organizations, such as NFTY: The Reform Jewish Youth Movement, had Kol Isha, a group program that looked at Jewish values and issues through the lens of gender and feminism. Moving Traditions, in collaboration with Union for Reform Judaism and United Synagogue Youth, created Kol Koleinu to fulfill a similar purpose in 2018. Anolik stepped in as fellowship director a year later.

Before joining Moving Traditions, Anolik received her bachelor’s degree from Dickinson College and a master’s degree from the University of Pennsylvania Graduate School of Education. Though Anolik views her Jewish upbringing as different from that of today’s teens, her connection to her paternal grandmother, a Holocaust survivor, is largely what inspired her to work with young Jews.

Born in what was then Czechoslovakia, Erna Anolik grew up in a large family and right before graduating high school in 1944, was sent to a lumberyard, where Nazis kept the town’s Jewish population for several weeks until they were deported to Auschwitz. By luck, Erna and one of her sisters were sent with 600 other Jewish women to a concentration camp in Essen, Germany, where they were forced laborers.

The sisters helped each other survive the cold and treacherous conditions and, with the help of a German gentile in a nearby town, were able to escape during a bombing raid and hide at a cemetery three miles away, before staying with the man who helped rescue them. The rest of their family died in the Shoah.

Erna later testified in the Nuremberg Trials — in English — at age 21.

“I think about her journey often. I think about how she taught me about resilience, and how resilience is an incredible mindset that I want to impart to the teens that I work with,” Anolik said. “Even though she faced tremendous hardship, it was possible for her to build a life of joy and meaning and for her to be connected so deeply with Judaism.”

Anolik’s goal at Moving Traditions is to meditate on and address what “never again” really means.

Beyond sharing the stories of survivors, “never again” means fostering Jewish pride, standing up against all forms of discrimination and building coalitions with groups outside of the Jewish community — skills that Moving Traditions helps to instill. 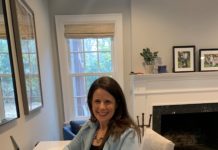 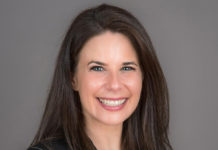