Paula Vogel’s 2015 play “Indecent” is both retrospective and prescient.

The Tony Award-winning show explores the real-life controversy that followed the early 20th century Yiddish play “God of Vengeance” by Sholem Asch, which features what is considered the first kiss between two women in a play — one of whom is a sex worker.

While “God of Vengeance” introduces and grapples with subversive themes in Judaism, “Indecent” deals with the show’s impact on European and American Jewry in a time of growing antisemitism and censorship that foreshadowed the Holocaust.

In 2023, another period of heightening antisemitism and discourse over censorship, the 2015 play takes on additional weight. The Players Club of Swarthmore, which opened its 2023 season with “Indecent” on Jan. 6, is aware of its responsibility of producing the show. “Indecent” runs through
Jan. 21.

“It’s almost difficult to think of something happening today that this show does not speak to in some way,” said actor Sofie Rose Seymour, who
is Jewish.

Seymour plays Chana Mendelbaum among other characters in “Indecent,” and their involvement in the play speaks to their queer and Jewish identities.

“This play allows me to bring more of my history, my family and myself than any other work I have been a part of,” they said. “It is so emotional to play these Jewish and queer ancestors who have been given the chance to step out of the script and the ashes and the closet of history, and to help them live for a few hours more each night.”

“Indecent” begins in 1906 and follows a series of theater troupes, all led by stage manager Lemml, as they perform “God of Vengeance” across Europe, and later the United States, during the early and mid-1900s.

In between performances over the years, the troupes grapple with the play’s complicated legacy and impact on their lives: whether sex work should be represented and spotlighted in Jewish characters; the love story of two women that exists on and off stage; and the dangerous consequences of performing the taboo play both in the U.S. and in Nazi-occupied Europe.

The Players Club production of “Indecent” features a cast of whom half are Jewish and a production crew that is almost entirely Jewish, according to actor Jeff Barg, who is Jewish and plays Lemml in the show.

“The whole process, I think, has been emotional for us,” he said. “Because in 2023, there’s a lot of antisemitism in politics and in popular culture, and that makes a lot of lines in the show hit harder than they otherwise might.”

On Jan. 5, Florida’s Duval County Public Schools officials told performers at Douglas Anderson School of the Arts in Jacksonville, Florida, that they could not continue with their production of “Indecent,” JTA.org reported. Last year, Florida Republican Gov. Ron DeSantis signed into law the Parental Rights in Education — or “Don’t Say Gay” — Law.

The Players Club production of “Indecent” will be performed to mostly a non-Jewish audience and will rely on universal themes to have the play’s message hit home.

“The theater is willing to take on work that is more challenging,” Barg said. “No matter what background people are coming to the show with, there’s still a lot of joy in coming together and performing.”

Though the themes of lightness and darkness and what it means to be American or a minority can strike a chord with most audience members who walk through the theater’s doors, the specifics of the play, personal to the lives of a theater troupe’s Jewish cast and crew, make “Indecent” a once-in-a-lifetime experience for them.

“The way that Jewish tradition encourages [us] to wrestle with our angels,” Seymour said, “‘Indecent’ gives its characters a chance to wrestle with what it means to be Jewish, what it means to be queer, to be in love, to be American, to face the horrors of injustice, and throughout it all, how to tell a story that allows us to be all that and more.”

For more information about the show, visit pcstheater.org/main-stage/indecent. 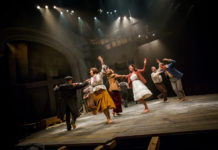 Theater Review | ‘Indecent:’ That’s the Story of Our Times