In 2017, Deborah Veach went back to Germany, looking for the site of the displaced persons camp where she and her parents had been housed after World War II. They were in suspension, between the lives her parents led in Belarus before they were shattered by the Nazis, and the unknown fate awaiting them as refugees without a country.

To her dismay, and despite the fact that Foehrenwald was one of the largest Jewish DP centers in the American-controlled zone of Germany, she found barely a trace. A complex that once included a yeshiva, a police force, a fire brigade, a youth home, a theater, a post office and a hospital was remembered by almost no one except a local woman who ran a museum in a former bathhouse.

“It was sort of an accident of history that we were there in that particular camp in Germany, of all places, with no ties, no extended family, no place to call home,” said Veach, who was born at Foehrenwald in 1949 and lives in New Jersey. Now, “they renamed it. They changed the names of all the streets. There is nothing recognizable about the fact that it had been a DP camp.”

Veach is part of a now-aging cohort of children born or raised in the DP camps, the last with a first-hand connection to the experience of some 250,000 Jewish survivors who passed through them at the end of the war. To make sure memories of the camps survive them, the YIVO Institute for Jewish Research and the United Nations Department of Global Communications have staged a short-term exhibit, “After the End of the World: Displaced Persons and Displaced Persons Camps.” 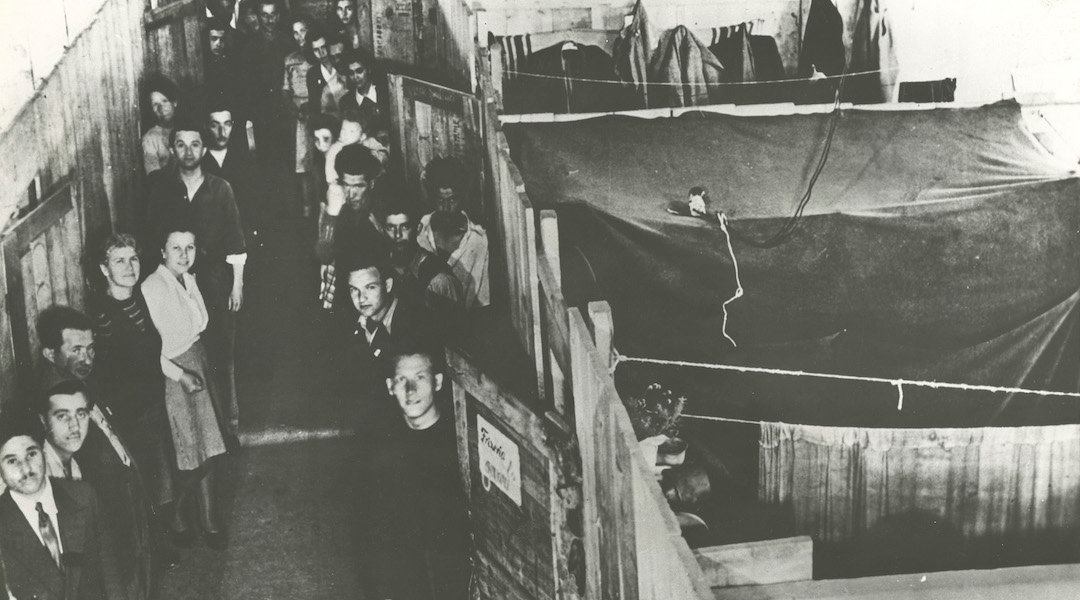 Among the artifacts on display are dolls created by Jewish children and copies of some of the 70-odd newspapers published by residents, as well as photographs of weddings, theatrical performances, sporting events and classroom lessons.

The exhibit is “about the displaced persons themselves, about their lives and their hopes and their dreams, their ambitions, their initiatives,” said Debórah Dwork, who directs the Center for the Study of the Holocaust, Genocide, and Crimes Against Humanity at the Graduate Center-CUNY, who served as the scholar adviser for the exhibition.

“There’s no point where the residents of these DP camps were just sitting around waiting for other people to do things for them,” she told the New York Jewish Week. “They took initiative and developed a whole range of cultural and educational programs.”

As early as 1943, as the war displaced millions of people, dozens of nations came to Washington and signed onto the United Nations Relief and Rehabilitation Authority. (Despite its name, it preceded the founding of the U.N.) After the war, the British and U.S. military were in charge of supplying food, protection and medical care in hundreds of camps throughout Germany and Austria, and UNRRA administered the camps on a day-to-day basis.

Early on, Jewish Holocaust survivors — some who suffered in concentration camps, others who had escaped into the Soviet Union — were put in DP camps alongside their former tormentors, until the U.S. agreed to place them in separate compounds. Unable or unwilling to return to the countries where they had lost relatives, property and any semblance of a normal life, they began a waiting game, as few countries, including the United States, were willing to take them in, and Palestine was being blockaded by the British.

Abiding antisemitism was not the only reason they remained stateless. “Jews were [accused of being] subversives, communists, rebels, troublemakers, and the world war quickly gave way to cold war, and with it the notion that Hitler had been defeated and what we have to worry about is the communists,” David Nasaw, author of “The Last Million,” a history of the displaced persons, told the New York Jewish week in 2020.

In 1948 and 1950, Congress grudgingly passed legislation that allowed 50,000 Jewish survivors and their children to come to the United States. The rest were eventually able to go to Israel, after its independence in 1948.

The U.N. exhibit focuses less on this macro history — which includes what became another refugee crisis for the Palestinians displaced by Israel’s War for Independence — than on life in the DP camps.

“The exhibition illustrates how the displaced persons did not shrink from the task of rebuilding both their own lives and Jewish communal life,” said Jonathan Brent, chief executive officer at YIVO, in a statement.

Among those rebuilding their lives were Max Gitter and his parents, Polish Jews who had the perverse good luck of being exiled to Siberia during the war. The family made its way to Samarkand, in Uzbekistan, where Gitter was born in 1943. After the war ended, his parents returned to Poland, but repelled by antisemitism sought refuge in the American zone in Germany. They spent time in the Ainring DP camp, a former Luftwaffe base on the Austrian border, and at a small camp called Lechfeld, about 25 miles west of Munich. 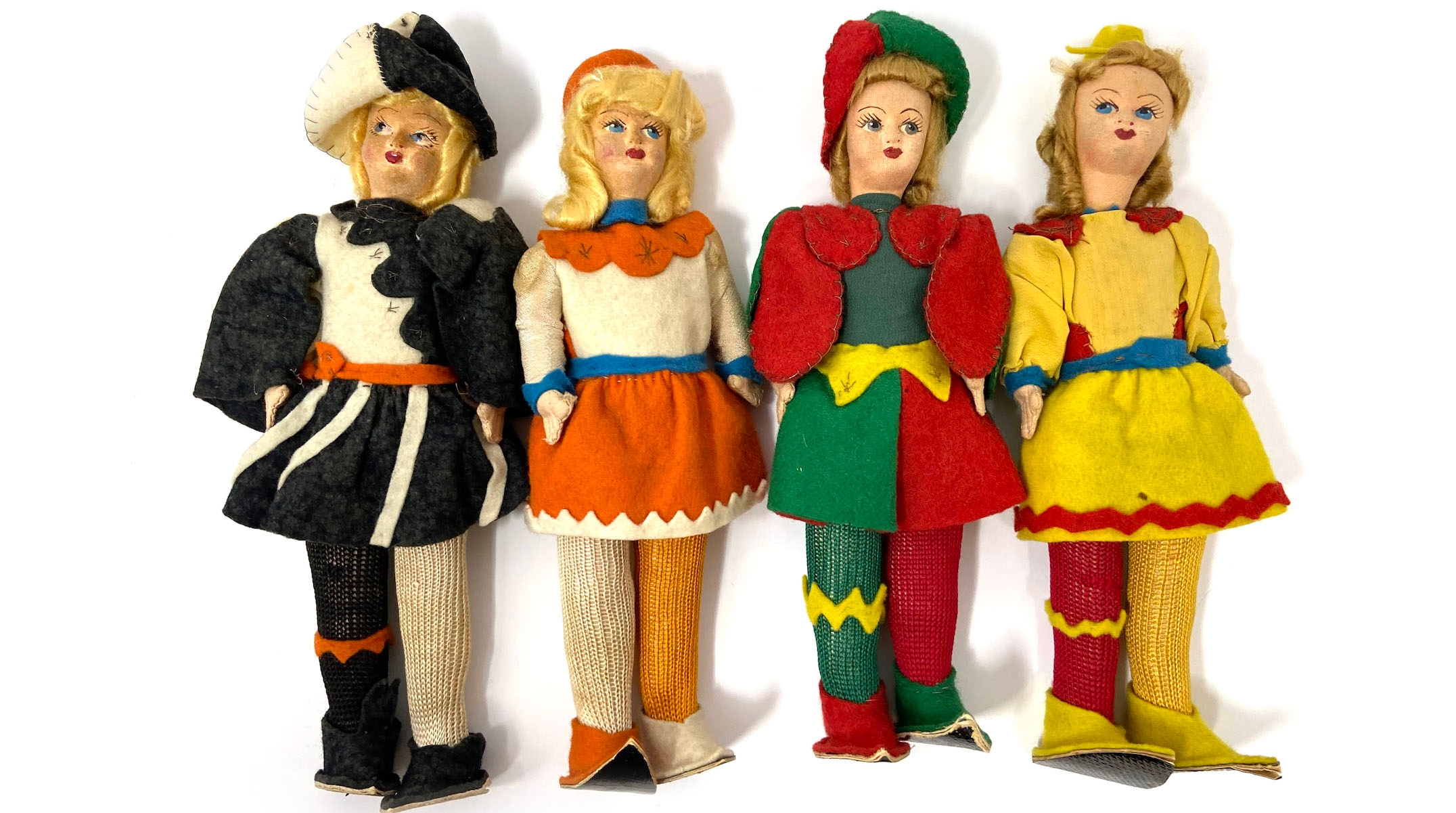 Dolls made by stateless Jewish children residing in a DP camp near Florence, Italy, known as “Kibbutz HaOved.” The dolls are attired in local costumes based on the districts of the Tuscan city of Sienna. (YIVO Institute for Jewish Research via JTA.org)

“I was there until we came to the United States when I was six and a half, so I have some very distinct memories and some hazy memories,” said Gitter, emeritus director and vice chair of the YIVO board. One story he hasn’t forgotten is how his father and a friend were walking through the camp when they came upon a long line of people. “They were from the Soviet Union, so they knew that when there’s a line that it might be of interest.” It turned out to be a line for the lottery that would allow them to get into the United States under the Displaced Persons Act of 1948.

The family came to the United States in 1950, to “pretty shabby lodgings” in the Bronx, before his father bought a candy store and moved to Queens. Max went on to attend Harvard College and Yale Law School, and became a corporate litigator.

Gitter’s brother was born in one of the camps, and the exhibit includes a poster depicting the population increase between 1946 and 1947 at the Jewish DP center Bad Reichenhall. The birthrate in the camps has often been described as evidence of the optimism and defiance of the survivors, but Dwork said the truth is somewhat more complicated.

“There was a very high birth rate among the Jews in DP camps. This is the age group of reproductive age, at 20 to 40,” she said. “However, this image of fecundity hides what was rumored to be a significant abortion rate, too. And women had experienced years of starvation. Menstruation had only recently recommenced. So many women, in fact, miscarried or had trouble conceiving to begin with.” 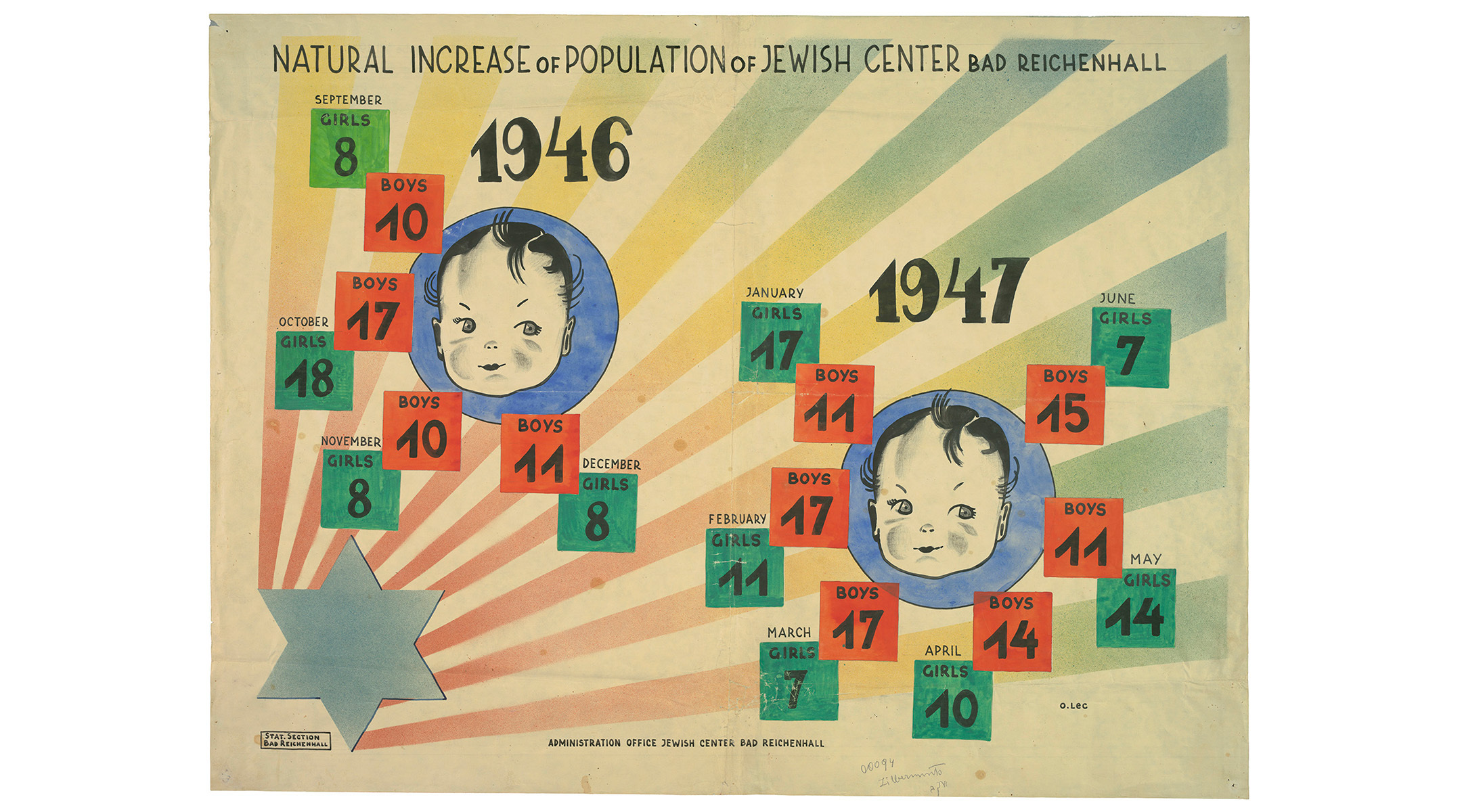 A chart by artist O. Lec depicts the natural population increase of the Jewish Center Bad Reichenhall, Germany, 1946-1947. There was a very high birth rate among the Jews in DP camps. (YIVO Institute for Jewish Research via JTA.org)

“There is no silver lining here,” she added. “People live life on many levels. On the one hand, DPs look to the future and look with hope; at the same time, they carry tremendous burdens of pain and suffering and trauma and trepidations about the future.”

Veach, a member of the YIVO board, hopes visitors to the exhibit understand that such trauma is hardly a thing of the past.

“I think the real lesson is that history keeps repeating itself,” said Veach, growing emotional. “Basically we have DPs on our border with Mexico, you have DPs from Ukraine. I don’t think people realize the repercussions for these people who are trying to find a place to live. These are good people who are just placed where they are by history.”

Gitter, who like Veach will speak at an event Jan. 24 at the U.N. marking the exhibit, also hopes “After the End of the World” prods the consciences of visitors.