At the end of the Walnut Street Theatre’s 1961 season, 34-year-old Neil Simon debuted his first full-length play, “Come Blow Your Horn,” a comedy that would go on to run for 678 performances on Broadway later that year.

The Center City theater that helped launch the Jewish playwright’s career is spotlighting his work once more with its production of “Last of the Red Hot Lovers,” running from Jan. 10 to Feb. 5.

Written in 1969, “Last of the Red Hot Lovers” combines Simon’s deprecating and witty humor with his cogent observations about the human condition to tell the story of a nebbish Barney Cashman, deep in his midlife crisis, in his quest to become part of the sexual revolution of the time by committing adultery.

The play takes place in his New York City apartment, where three women he tries to court filter in (and mostly out) of his apartment.

Though over 50 years old, Walnut Street Theatre didn’t have to do much to breathe new life into the show — the charm of which comes from finding comedy in crisis, according to President and Producing Artistic Director Bernard Havard.

“Simon manages to find laughter in adversity, which I’ve always found to be reassuring about his work,” Havard said. “He takes dire circumstances and turns them into grips of laughter.”

Havard knows firsthand about Simon’s writing prowess. He and his wife met Simon and his producer Emanuel Azenberg in Philadelphia after Havard read Simon’s farce “Plaza Suite.” The party discussed the production of “Come Blow Your Horn,” which Simon wanted to eventually take to Broadway, despite Azenberg’s reservations, Havard recounts.

“He felt that he put it in good hands with me and the Walnut, and we had big success with it,”
Havard said.

Simon seemed to agree. In a Dec. 11, 1994 letter to Havard, Simon wrote, “The memories of that experience, as wonderful as it was, was also fielded with terror for me. If we failed there, we would not have gone on to New York and me to a lifetime of writing plays.”

Beyond Simon’s connection to Philadelphia is his homage to his Jewish roots, reflected in his layered characters and zinging sense of humor.

“Humor has often been used by Jewish comedians and writers as a defense against anti-Semitism and exclusion, and Simon is no exception,” Gary Konas writes in the introduction of “Neil Simon: A Casebook.”

Blending self-deprecating digs with Yiddish words that have now become ubiquitous in American vernacular, Simon integrated Judaism so seamlessly into his works that it became effortless to him.

In an interview with Jackson Breyer, Simon said his Judaism was ​​“so deeply embedded in me and so inherent in me that I am unaware of its quality,” according to a 2018 JTA article shortly following Simon’s death.

Simon’s shows “Brighton Beach Memoirs,” “Biloxi Blues” and “Broadway Bound” are semi-autobiographical, featuring a Jewish protagonist, as many of his shows do.

Though Simon’s legacy is in his ability to capture humanity in its vulnerable states, the Walnut’s productions of “Last of the Red Hot Lovers” had to take into consideration its place in history and its relevance today.

To do this, director Jennifer Childs, who is making her directorial debut at the Walnut, said that protagonist Barney’s apartment fills the center of the theater’s stage, but the set is also flanked by two other apartments to create the illusion of a cramped New York studio apartment. Sound design for the show created a soundscape to nestle Barney’s story among the many others happening concurrently in the city.

But besides tweaking some language around race and directing acting choices to contextualize the play’s misogynistic-at-times depiction of women, Childs changed little of Simon’s vision.

According to Childs, Simon’s works have been “mimicked by some, but it’s never fully or as well done,” with other playwrights unable to fully emulate Simon’s style of unrelenting wit and candor.

Following a challenging 2022 — and financial hardships many theaters, including the Walnut, have endured — the appeal of “Last of the Red Hot Lovers” lies in its universal message of reflection and gratitude.

“There’s something about investing in what you have that’s in front of you, as opposed to looking for something outside yourself all the time,” Childs said. 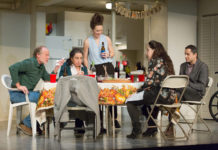 Plays Discover Identity ‘In Between’ Humanity 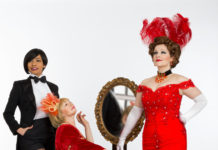 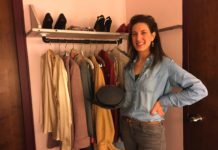