One hundred years after its 1917 founding, Sigma Alpha Rho, a Jewish fraternity for high school boys founded in West Philadelphia, was a ghost of what it used to be.

Once with more than 50 active chapters spanning from Pennsylvania and New Jersey to California and Canada, SAR, by the 2010s, was “limping along,” according to Larry Blumenthal,  past international president of the SAR Fraternity Alumni Association.

At the alumni association’s 2017 100th anniversary celebration, Blumenthal and a few other alumni announced to the more than 650 attendees that SAR was all but done.

“We looked at the reaction — not that people were shocked because people know that things have changed over the years — but the disappointment was definitely there,” Blumenthal said.

But the disappointment was motivation for Blumenthal. He believed that there was still great interest in the fraternity and, along with some other alumni in the Philadelphia area, he decided to revive and revamp the organization.

In December, SAR inducted its first new chapter in 10 years as 12 high school boys from Bucks County became brothers of the fraternity.

“Once you become part of Sigma Alpha Rho, you become a brother,” said Sean Klein, 16, a new inductee from Richboro. “It’s a really inspiring thing to be treated on the same grounds as some of the people who are very influential in their fields, who are very respected as adults, and it’s very inspiring to be brothers with them.”

Just like their brothers decades before them, today’s SAR members are tasked with organizing and running community events, instilling values of independence, according to Blumenthal. So far, the high schoolers have organized self-funded dinners, a paintball event open to nonmembers and a haunted hayride.

“It’s typical friend group activities,” said new inductee Ethan Lynn, a 17-year-old in Southampton. “But the difference is that it’s held together with the motivation to have a Jewish community.”

The group has also volunteered with Jewish Relief Agency to package food boxes to deliver to food-insecure community members. In the future, the group hopes to organize a ski trip and attend a Broadway musical.

The idea of a rebooted organization is exciting for Lynn, who wants to experience a group of young men “maturing together.”

“I liked the idea of really building a community for myself and seeing it form before my eyes,” he said.

Even in an age of social media and three years of COVID-hindered social lives, that core value of leadership and community is what connects the old generation of SAR brothers with the teenage members of today, alumni said.

“It gave us the opportunity to make decisions on our own and plan our own events, whether they were dances, Jewish Community Center events, sporting events or meeting up with other chapters,” said Joel Hollander, president of SAR Alumni Association and an active member of the fraternity in the late 1960s.

After 11 young men founded the West Philadelphia fraternity in 1917, the organization, originally founded as a “social and athletic” club, took off four years later, with another Philadelphia chapter of 10 Central High School students forming in 1921. A regional chapter was formed in January 1924, and the next month, the organization launched a national newspaper.

By the late 1920s, the fraternity, filled with young men eager for social connections, had formed a chapter in Louisiana and continued to grow, even after World War II, with the organization spanning the country by the 1960s. At one point, Cherry Hill, New Jersey, had five chapters.

Chapters hosted dances, had baseball teams, and met up for regional and national conventions, funding their housing, entertainment and travel with car wash fundraisers and ad sales. At age 20, Hollander hosted an international convention in Washington, D.C., with 300 brothers in attendance.

After the Vietnam War, interest in the fraternity waned, but Blumenthal believed that a self-led Jewish youth group still had appeal to young men today. After SAR’s 100th anniversary, he, as chair of the group’s reactivation committee, worked with a marketing firm to hold a series of focus groups, gauging the interest of a group to young men. His hunch proved correct.

“We had to start somewhere,” he said. “And I’m pretty bullish on this group expanding.”

SAR will likely induct another Philadelphia-area chapter this month.

Though Blumenthal was eager to give the organization a facelift with a new website and branding, appealing to the teenagers of today, part of the draw of SAR is its storied history. Lynn’s father was a member of the organization decades ago and encouraged him to join.

“I was kind of motivated to keep this organization with such a long history going,” Lynn said. “And just the fact that we’re building a community with just a bunch of friends, I mean, there’s nothing bad about it.” 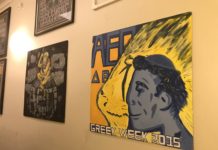