About 75 people show up every Saturday to Congregation Beth Hamedrosh in Wynnewood for Shabbat morning services. Then throughout the week, 10 to 20 congregants attend morning and evening minyans.

For a synagogue with 80 or so families, that’s a high percentage of devoted members.
Many of them are Orthodox or, as some like to say, traditional, after growing up in a Conservative or Reform Jewish community, or even outside of a religious community altogether. Their spiritual journeys took them to Orthodoxy, Wynnewood and Beth Hamedrosh. And now it’s the center of their weekly lives.

“Certainly the members that have been part of the congregation a while, over a decade, are extremely dedicated,” said Mark Solomon, a congregant in his 11th year. “Those that have joined have adopted those practices.”

Solomon attributed that dedication to “a love of Judaism.” It’s not just the services, either. It’s a learning environment that includes morning Talmud study sessions and evening Torah classes. It’s also a spirit of helping one another during periods of childbirth, deaths in the family and other major life events. Congregants step forward to “provide meals or whatever families may need,” said Beth Razin, a member in her 32nd year.

Solomon, who was ethnically Jewish but not religious, found Beth Hamedrosh after his parents died within 10 months of each other a little over a decade ago. He started looking for morning minyans, and the Wynnewood synagogue was on his route to work in Delaware. He stopped in once and then kept coming back.

“I found that people there cared about davening and Jewish law,” he said. “That was something that was growing more and more important to me.”

Razin discovered Beth Hamedrosh when it was still located in Overbrook Park in 1990. After growing up in the Conservative movement, she became shomer Shabbos with her husband and started looking for other observant families so her kids could make friends. They moved to Overbrook Park and joined the synagogue that was two blocks away.

The longtime member remained dedicated to her spiritual home even after her kids grew older and the home moved down the street to Wynnewood. Today, she needs to walk 1.1 miles instead of two blocks. But she’s OK with that.

“It was important to have shomer Shabbat families that our kids could play with,” Razin said. “We realized that would only really happen in an Orthodox community.”

Beth Hamedrosh’s spiritual leader, Rabbi Yonah Gross, arrived in 2009 from an Orthodox synagogue in Phoenix. He had never heard of Wynnewood before, he said. He also had no idea that it was part of the Philadelphia suburbs.

But when the rabbi got here, he quickly discovered that the synagogue was a good fit. He enjoys the challenge of answering halachic questions, and he likes to meet Jews where they are to help them figure out how to move forward in their journeys. In the Wynnewood community, his job is to do both.

Razin said that when Gross first arrived, he got 30 volunteers to go around to people’s doorsteps during the High Holidays and leave little bags with apples and honey in them — just to say happy holidays. Solomon credited Gross with convincing him to join the synagogue in 2011. It was evident that the rabbi “cared about all Jews,” he said.

“He’s the one who reaches out to all different Jews,” Solomon added.

According to Solomon, Beth Hamedrosh’s parking lot is closed on Shabbat. But if someone parks around the corner and walks in, Gross and the members greet them at the door.

“They are a Jew when they walk in the door,” Solomon said.

Beth Hamedrosh’s congregation includes baby boomers, Gen Xers and millennials. According to Razin, families from 40 or 50 years ago have moved out and been replaced by younger households. Those young families move into Wynnewood neighborhoods, then walk to Beth Hamedrosh, since Orthodox Jews don’t drive on the Sabbath.

This cycle has allowed the synagogue to keep its membership base steady. Razin and Gross don’t believe it has declined or increased since Gross started 13 years ago.

“As the rabbi said, it’s a good place for a starter home,” Razin said of Wynnewood.

But Solomon explained that, over the past 30 years, the Main Line has shifted from a Conservative Jewish area to a more Orthodox region. He also said that more Orthodox people continue to move to the Philadelphia area and that they have a younger median age than other Jewish denominations.

“Ten years from now, there are going to be a lot more people in this building,” he concluded. ■ 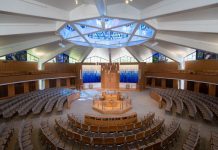 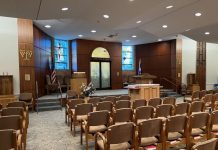