Among the many moments of culture shock Avezu Fanta had upon arriving to the United States in 2019, the copious bagels present at Jewish events was just one noteworthy difference.

In the three years Fanta has spent in Philadelphia as Hillel at Temple University’s Israel Fellow, the 31-year-old has since acclimated to American Jewish culture, despite the ample differences she grew up with in Israel after emigrating from Ethiopia when she was 7 months old.

Bagels were, of course, only the beginning of Fanta’s exploration of the relationship between American Jewish and Israeli Jewish cultures. During her tenure at Temple, she’s been tasked with sharing her own Israeli Jewish culture, introducing both Jews and non-Jews to Israel’s ways of life.

As she begins her final semester with the Hillel in January, her mission has shifted: Temple University students, as well as most American college students, need to learn how to talk about Israeli politics.

When Fanta arrived at Temple University in August 2019, the goal of her fellowship was to bring a diverse voice from Israel to Philadelphia and to share Israeli Jewish culture with the Temple student body, as well as grow appreciation and understanding for the Jewish state.

In May 2021, following an escalation in the Israeli-Palestinian conflict, Fanta’s strategy to speak with students changed. She began holding conversations with students, Jewish and non-Jewish, about how to engage with the conflict. Last semester, Fanta held a weekly “Kol Yisrael” class to talk about the nuances of Zionism.

“The only criticism they have around Zionism is around the conflict,” Fanta said of some students. “But also it was around how we, as the Jewish students, can stand with Israel but also say, ‘We don’t support the Israeli government and what’s happening in the
West Bank.’”

Fanta is familiar with bringing thoughtfulness to complex conversations around Jewish identity. An Ethiopian Jew raised in Israel, Fanta has her own unique perspective on synthesizing a whole Jewish identity.

As a child, Fanta came to Israel as part of Operation Solomon, a May 1991 covert military operation in which 35 Israeli aircrafts airlifted more than 14,000 Ethiopian Jews to Israel in about 36 hours.

Growing up, she and her seven siblings spoke little with her parents about their Ethiopian identity in the context of Israel. Her parents had dreamt for their teenage and adult lives of coming to Israel; because Fanta and her siblings had achieved their parents’ dream, they felt they were not able to complain about identity or being a minority in Israel.

That’s not to say Fanta wasn’t conflicted about her identity. As a teenager, Fanta had a “little identity crisis,” feeling that her Ethiopian and Israeli identities were at odds with one another. When she joined the Israel Defense Forces, later to become a medic and a lieutenant, she met other Jewish Israeli minorities, including Russian Israelis who were at ease with their dual nationalities.

“It’s really a part of me,” Fanta said of her Ethiopian ethnicity. “Like culturally, I grew up in an Ethiopian home; I cannot disconnect from that.”

Talking about ethnicity and nationality in Israel is different than in the United States, Fanta said. While American Jews prefer to establish discreet identities across denominations and ethnicities, and use language around race and oppression to reckon with the country’s racism and antisemitism, in Israel, there’s less discourse about identity.

Instead, Fanta said, identities in Israel are divided into Jewish and non-Jewish first, with further breakdowns for various minorities. Most of the time, however, Israelis aren’t as concerned with the various taxonomies. That mindset is reflected in Fanta’s teaching and her interest in speaking with both Temple’s Jewish students and non-Jewish
students.

Her openness to talk about Israel to so many demographics is part of what has made her an effective Israel Fellow, according to Hillel at Temple assistant executive director Mallory Kovit.

“She can have a conversation with anybody; she could talk to anybody about anything,” said Kovit. “She’s not going to shy away from a conversation.” 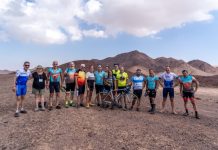