Sam Salz is meticulous in matching his kippah to his football uniform: The white and burgundy of the head covering matches his Texas A&M football jersey and makes it easily visible to a crowd, he said.

In a Nov. 26 primetime television broadcast, Salz can be easily recognized by his kippah as he jumps up and down and waves his arms, a victory dance celebrating an Aggies home win against the Louisiana State University Tigers.

The 20-year-old sophomore and running back from South Philadelphia plays with No. 39 on his jersey, representing lamed tet melachot, the 39 categories of work forbidden on Shabbat.

Salz refuses to play on the Sabbath and is an active member of the Texas A&M Chabad. After joining the Aggies as a walk-on in October, Salz, with his coaches’ permission, missed the first practice with the team to observe Yom Kippur. He’s the second-ever Shabbat-observant NCAA Division I football player.

“It’s a good reminder to all the other young Jewish kids who are into sports, who want to play at a high competitive level, that they don’t have to compromise on being who they are,” Salz said.

Despite attending a Division I school with a 128-year-old football program, Salz began his journey to the sport about a year ago.

On Oct. 16, 2021, Salz took a trip to New York with Chabad and talked to a friend about training to join the football team. He said that when he brought up the idea to a stranger on the subway and received their approval, that sealed the deal for Salz. He began training when he returned home.

When Salz wasn’t running sprints or completing agility training, he was teaching himself the rules of football, a sport he had always enjoyed, and meeting with the team’s coaches, who let him join the team of 130 players, 85 of whom were scholarship players.

While attending Kohelet Yeshiva High School in Merion Station, there was no football team, Salz said. As the time to apply for colleges approached, Salz was interested in Texas A&M for its tight-knit community, strong alumni network and culture of football fanaticism.

Growing up attending B’nai Abraham Chabad in Center City, Salz enjoyed a hamish community, wanting to find that same warmth wherever he chose to matriculate. Texas A&M’s Chabad, led by Rabbi Yossi Lazaroff, felt like what Salz was looking for.

“It’s a very, very warm community; everyone kind of knows everyone,” Salz said of B’nai Abraham Chabad. “And A&M is very similar to that.”

Lazaroff sees Salz every day at morning prayers, Torah classes and Friday night dinners. For the past 18 months, he’s provided support for Salz, one of about 60-90 Jewish students at Chabad.

Despite being one of the largest colleges in the country composed of more than 56,000 undergraduates, Texas A&M’s Jewish population is small, Lazaroff said. Though Salz believes he hasn’t encountered any challenges balancing his Jewish identity with his role on the football field, Lazaroff said it’s not always easy being a minority.

Lazaroff remembers Salz having concerns about making compromises to his Judaism to pursue football.

“It’s been very beautiful to see someone like him saying, ‘I’m not going on the field on Shabbos.’ … He’s not looking to bend the rules; he’s looking to play by the rules,” Lazaroff said.

Though pursuing a degree in economics with an interest in real estate, Salz still believes there’s a chance he could become a professional athlete.

His next step is to play in a game, competing for one of 11 spots on the field with 129 other athletes, including about 45 other walk-ons.

“I’m doing everything I can to compete, to make it to that position,” he said.

As a backup plan, Salz is interested in rabbinical school, using his experience navigating being a shomer Shabbos Jew and D1 athlete to relate to young people.

“There needs to be a rabbi for every generation,” Salz said.

“It’s very important that we have
rabbis who care about law, are knowledgeable and present Judaism well, as well as who can relate to students or assist students, Jewish kids, anyone who’s asking, in a way that you can relate to,” Salz continued.

For Salz, the evolution of his identity as a football player is intertwined with his evolution as a Jewish person, he said. If he were to select becoming a rabbi from the many goals he strives toward, he would teach a young Jewish generation informed by the lessons he learned on the field.

“You can’t separate the Judaism from the football,” he said. 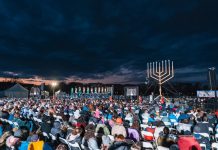 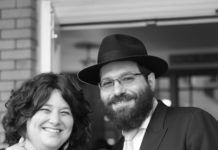 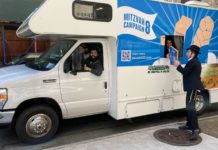