Diners in the Greater Philadelphia area are hungry for more of their favorite Ashkenazi comfort foods, evidenced by the growth of multiple Jewish-owned and Jewish-style food establishments.

On Dec. 9, Kismet Bagels opened its second brick-and-mortar location in Rittenhouse Square at 1700 Sansom St., only eight months after the opening of a first permanent location in Fishtown. Owners Jacob and Alexandra Cohen will debut a bialy stall in Reading Terminal Market in January.

Cowan, a fourth-generation deli veteran from Brooklyn, will stock the menu at Radin’s — named after his grandfather’s family name Smoradinsky — with reliable favorites from Famous 4th and the several other delis he’s owned and later sold in various locations in Center City and Cherry Hill, including the Kibitz Room, Pastrami & Things and Bread & Bagel.

Radin’s, within walking distance of Cowan’s home, offers convenience for the 67-year-old owner.

“I’m not the guy that’s looking to retire, but I’m looking to make my life a little bit easier by having something around the corner from my house,” he said.

Cowan recently put Famous 4th Street on the market but doesn’t have plans to close the deli.

Michael Kaplan, son of Short Hills Restaurant & Deli owner Jerry Kaplan, said that the Short Hills establishment had to shutter in November 2021 due to the continued financial impact of the pandemic.

“We were just doing takeout only for almost three years,” Kaplan said. “We were doing substantial business, but at that location, expenses are way too high.”

Classic Cake Co., which operates out of the former Short Hills Restaurant & Deli space, will move to a different location in the Short Hills Shopping Center.

Cowan said that a good deli should rely on the quality of its products, a strategy to which Cowan partially attributes his success.

“I tend to keep things very traditional: I pickle my own corned beef; I smoke my own pastrami; we do our own baking, and I try to keep things as I remember it as I grew up with,” he said.

“Once people that own these shops started exploring and trying different concoctions and flavors and not limiting themselves to only what they’ve at a New York deli or New York bagel shop, you see the response from customers, who are so eager for new specials and new things and familiar flavors on a different setting, in a different vessel,” Jacob Cohen said. “All bets are off now.”

Kismet Bagels pairs bagels with unconventional schmears, such as pickle and spicy everything cream cheeses.

Spread Bagelry also has found success in a new take on bagels, baking the bread in a wood-fired oven and serving unique flavors such as blueberry-lemon bagels and apple brown butter schmear. The Cherry Hill store will be its ninth location and first in New Jersey.

For the past year-and-a-half, the Cohens have experimented with bialys, a hole-less baked counterpart to their boiled-then-baked bagel cousins. In October, Kismet hosted a pop-up with Mike’s BBQ in South Philadelphia, slinging burnt end bialys. They’ve also hosted pop-ups alongside Amanda Shulman’s Her Place Supper Club and Pat’s King of Steaks, serving French onion soup and cheesesteak bialys, respectively.

While Kismet’s Center City location will continue to operate in the same model as their Fishtown store, with both locations sourcing bagels from Kismet’s commissary kitchen, the bialy stall will feature a more nimble menu, with bialys being made on-site. Customers will be able to watch their bialys being made behind the counter.

Kismet’s creative menu gathered a following after the Cohens began selling bagels in a commissary kitchen in Fishtown in May 2020. After nine months of running a Sunday pop-up on Frankford Avenue, the couple opened up their first brick-and-mortar store on 113 E. Girard Ave. in April.

While the permanent Fishtown shop stuck to Kismet’s roots, the Center City shop shows the business’ desire to expand its reach. Kismet has operated a stand at the Rittenhouse Farmers’ Market for the past year.

“Fishtown is like the newest, coolest neighborhood in Philadelphia, and then Rittenhouse Square is just such an institutional phenomenon,” Alexandra Cohen said. “The area is just such a famous location and just made the most sense.” 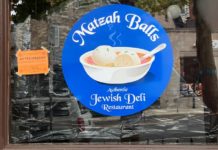 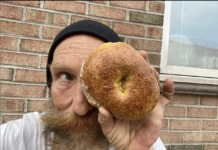 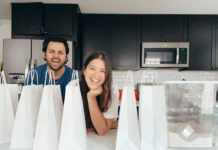