No, Paula Mandel doesn’t go from house to house sifting through trash cans, looking for items she can incorporate into her unique form of art.

But if you happen to have an old appliance, busted musical instrument, watch, sewing machine or some other piece of equipment you’re ready to throw out, she’d be happy to take it off your hands.

“I love things people don’t have a purpose for anymore,” explained Mandel, who just completed a three-month show, “The Threads that Bind Us,” at the Temple Judea Museum at Congregation Keneseth Israel in Elkins Park as part of its Artists Collaborative. “I can use them in my art.

“A bunch of pieces I did recently I don’t consciously know what their stories are going to tell until after I’ve finished them — and I love that. To me, it’s about the journey.”

Mandel grew up in Mount Airy, then attended Girls High School and Temple University, where she was a combined art and psychology major, then painted professionally over the next few decades while raising a family. She said her art began to change once she went back to school to study the intricacies of glass. 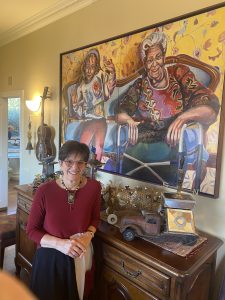 “I went back to school at Salem (New Jersey) Community College to study glass for two years,” said Mandel, who began her professional career as a play therapist at St. Christopher’s Hospital. She moved to Florida for a couple of years while her husband Rich was completing his residency, before returning home to work at the Art Forms Gallery in Manayunk painting personal stories for customers.

“It was hard to learn,” she continued. “But I learned to create characters out of rods with glass. To make a hand out of wax cast in glass.

“The way I work is I make a lot of parts — hands, eyeballs, characters — and then I’ll go into my storage room, take things out and start playing with them like I used to play with my dolls. The time I spend thinking about it usually takes as long as the creation, and glass takes a long time.”

But the result is pretty spectacular. Sculptures from the exhibit, which drew as large a turnout to KI as anyone could remember, now reside in her Conshohocken home.
That includes a number with deep, personal meaning.

“I loved my Bubbe Sarah,” she smiled while explaining the intricacies of a piece dedicated to her. “My grandmother was a seamstress. 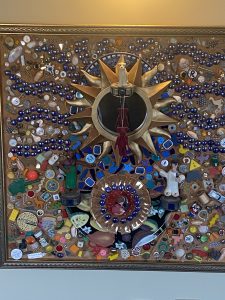 “She sewed for 50 years. This is her garment worker’s card, which I scanned into the piece, covered with glass and painted with fabric. A lot of pieces have to do with sewing because my grandmother and the ladies she worked with were always sewing men’s suits.”

Mandel believes such strong family connections not only resonate with her but everyone.
“The show was about my growing up as a Jewish woman with Jewish values and putting that into my artwork,” she said. “People I knew and who knew of me said it was a really valuable experience for them because they could see into my soul. People who knew me got to know me even more personally, but also people who didn’t know me could use the exhibit and explore their own families and ancestry.”

As much as she enjoys displaying her work and selling some of it, Mandel is engaged in a few ventures she considers her tikkun olam.

“They design and execute windows for a designated place. Some are in South Africa. Some in Ojibwe, Minnesota, and New Orleans. All are places that need inspiration. Our kids have done over 125 windows all over the world. This year we’re making windows for a place in Detroit.”

She’s also been engaged in “Souls Shot,” a program that makes portraits of people lost to gun violence for their families. 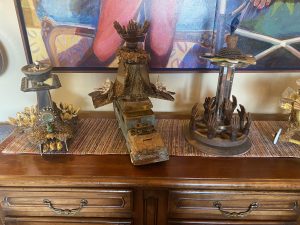 “It’s been a really powerful program for me personally and for the community,” she said. “The portraits are exhibited, and sometimes we get to meet the families. There’s such a heart behind it that it really feels like a mitzvah to be able to do them.”

Heartwarming as that is, it’s her ability to make art out of everyday items like toasters, heaters, rocking chairs and dolls that makes the mundane unique.

She turned her grandfather’s old newspaper rack, where she remembers him reading The Forward in Yiddish, into a conversation piece. A butter churner turned into a kaleidoscope of colors.

And during the pandemic, she even found a way to express both her frustration and her hope.

“Lifeboat” was a broken clay boat: “I put it back together as my response to the pandemic. And ‘Point the Way’ is fascinating because sort of a subliminal message comes out in my work. It’s looking for a way to get out of where we are.

“My art has a very important psychological component to it. I use things evocative of our parents’ and grandparents’ generations. I’ll use the same image over and over but in different ways, different orientation, different colors, which gives them different meanings.”
That resonates with her family.

“What I have learned over the years is artists need to create,” said her husband, Rich, a hand surgeon who played guitar while she played piano in a four-couple band they used to perform in known as the Hip Replacements. “Her work is very meaningful. It evokes emotion. Even now, when I look at this painting she did of my Dad who passed away when I was 30, it’s nostalgic. It reminds me of my father and our relationship.”

Jon Marks is a freelance writer.