In the days before Chanukah, which starts Sunday night, a few men and women from two Conservative institutions in Israel will travel to the small Jewish community in Chernivtsi, Ukraine, with a supply of needed items.

Amid the power outages stemming from Russian attacks, the volunteers will have blankets and sweatshirts for the cold, as well as menorahs and kippahs for religious observance purposes.

The 300 boxes of Chanukah candles will do double duty.

These days, the power in Chernivtsi, a city of around 250,000 (before the war) in western Ukraine, is more off than on. So the candles will do more than allude to the story of the Maccabees — they will help light Jewish homes across the city.

“This year it’s really important” to have and use Chanukah candles, said Lev Kleiman, leader of the city’s Conservative Jewish community, in a recent Zoom interview.

Although the need is urgent, “We will hold onto the candles until Chanukah,” Kleiman added, his words in Russian interpreted by Rabbi Irina Gritsevskaya, the Russian-born and Jerusalem-based “circuit rabbi” of the Conservative movement’s Schechter Institutes and executive director of its Midreshet Schechter Ukraine. The organizations are coordinating the transport of holiday supplies to Chernivtsi.

Among a few “couriers” bringing needed items to Jewish communities in Ukraine, Gritsevskaya has made several trips there over the last 10 months. At the start of the war, she urged Jews in other cities to make their way to Chernivtsi, which was far from the intense fighting on the eastern border.

Chernivtsi, which served as a place of refuge for thousands of displaced people from elsewhere in parts of the Soviet Union threatened by the Nazi army during World War II, is again attracting refugees from throughout the country. Earlier in the current war, Kleiman turned his synagogue into a refugee center for some of the millions of Ukrainians fleeing their homeland. The city also became a gathering site for worldwide faith leaders who have denounced the violence and expressed solidarity with the embattled Ukrainians. 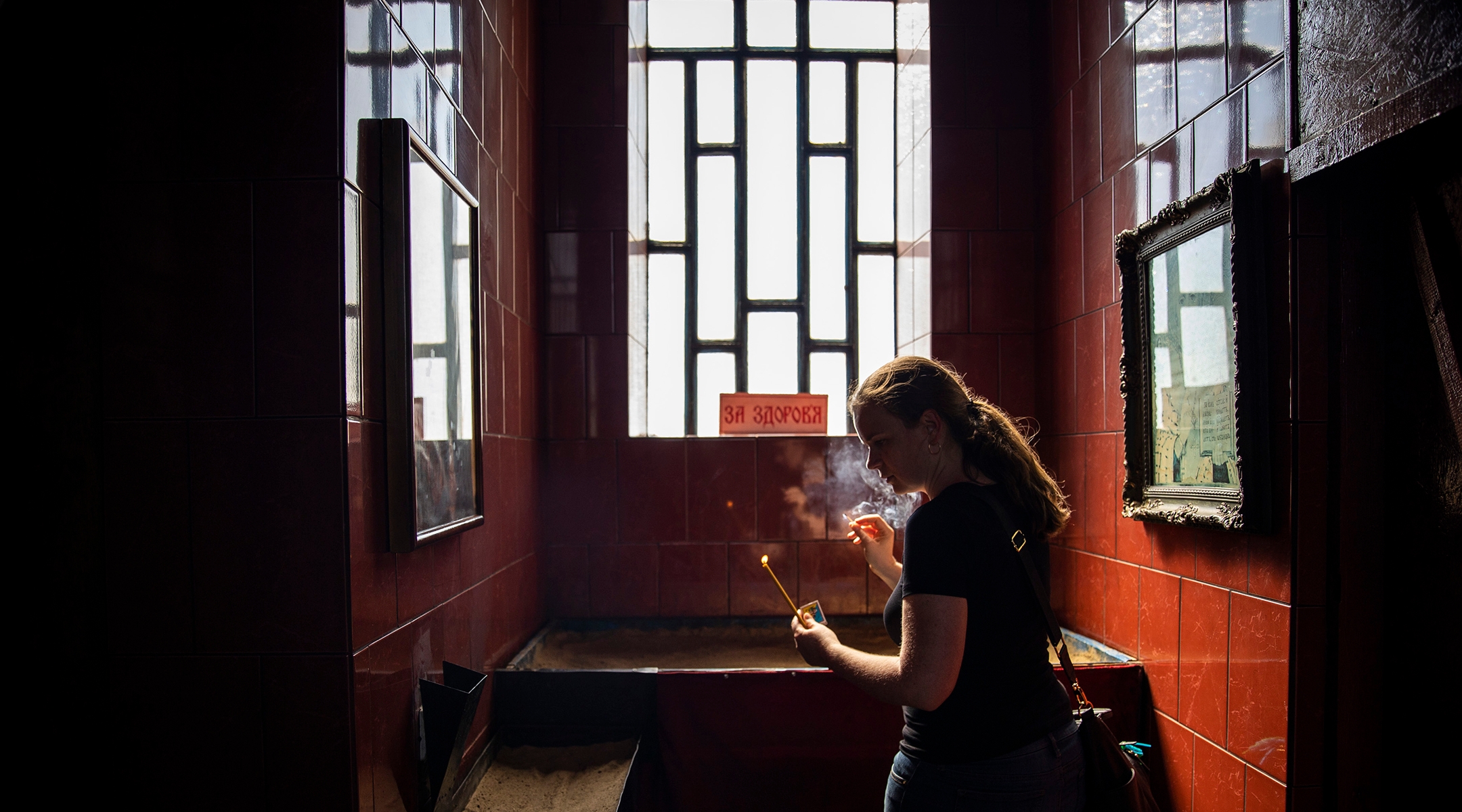 In addition to no heat and light in Chernivtsi, lack of electricity means lack of TV and radio use, along with spotty internet service. (Erin Clark/The Boston Globe via Getty Images via JTA.org)

Located on the Prut River, Chernivtsi (known at one time as “Jerusalem upon the Prut” for the strength of its Jewish community) is 25 miles north of the Romanian border and home to one of the country’s most active Conservative communities. The city’s Jewish population before the war began was estimated at 2,000, including many Holocaust survivors.

And today, following the invasion? The number could be larger or smaller, no one is counting — but some western cities have experienced population growth due to all of the migration.

“No one knows,” Kleiman said. “Many left, but many came.”

As in other Ukrainian cities, many Jews in Chernivtsi — especially women, senior citizens and children, everyone except draft-age males — have migrated. But uncounted other ones have come to a place of relative safety, either renting apartments or staying in ones under the auspices of the Jewish community. Most of the Jews in Chernivtsi now are those exempt from military service, Kleiman said. Others stayed in order to be with their husbands and fathers who joined the Ukrainian army after the war began, or to care for their aged parents.

Despite signs of war — rifle-carrying soldiers and policemen on the streets, empty shelves in stores because of shortages, people hurrying to safety when they hear sirens — Jewish life there has continued, according to Kleiman. The most active organizations in the city are the local outpost of the Chasidic Chabad-Lubavitch movement, the JDC-supported Hesed Shoshana Welfare Center and Kleiman’s Kehillat Aviv Synagogue (his official title is coordinator), which sponsors daily Jewish activities.

The synagogue — located near the Chabad center, with which it cooperates on relief activities — is housed in a small, two-story building that contains an office, a kitchen and a large multi-function hall. Kleiman says Chanukah in 2022 will be more important than in past years because in addition to its ability to bring people together,the holiday also asserts Jewish survival.

“There are a lot of parallels,” Kleiman said of the holiday and his community’s current situation.

Electricity in Chernivtsi flows only a few hours each day, and at night, no street lights are on, thanks to incessant Russian bombing of Ukraine’s infrastructure, and to government-imposed restrictions designed to conserve the little available resources.

A holiday of lights sans lights? “We’ve never done it before,” Kleiman said, adding that the Jews in his city understand the holiday’s symbolism.

Some will come to the synagogue for a communal candlelighting, according to Kleiman. Others will light their candles at home, in their windows. Like all other buildings in Chernivtsi, Kleiman’s office and apartment are subject to periodic electricity blackouts, often announced in advance.

“With G-d’s help we will soon have a generator” – and 24/7 lights and heat in the synagogue, he said. Until then, he and the other residents of Chernivtsi will shiver. The temperature in the city was 29 degrees Fahrenheit during the Zoom interview, and a light snow was falling. 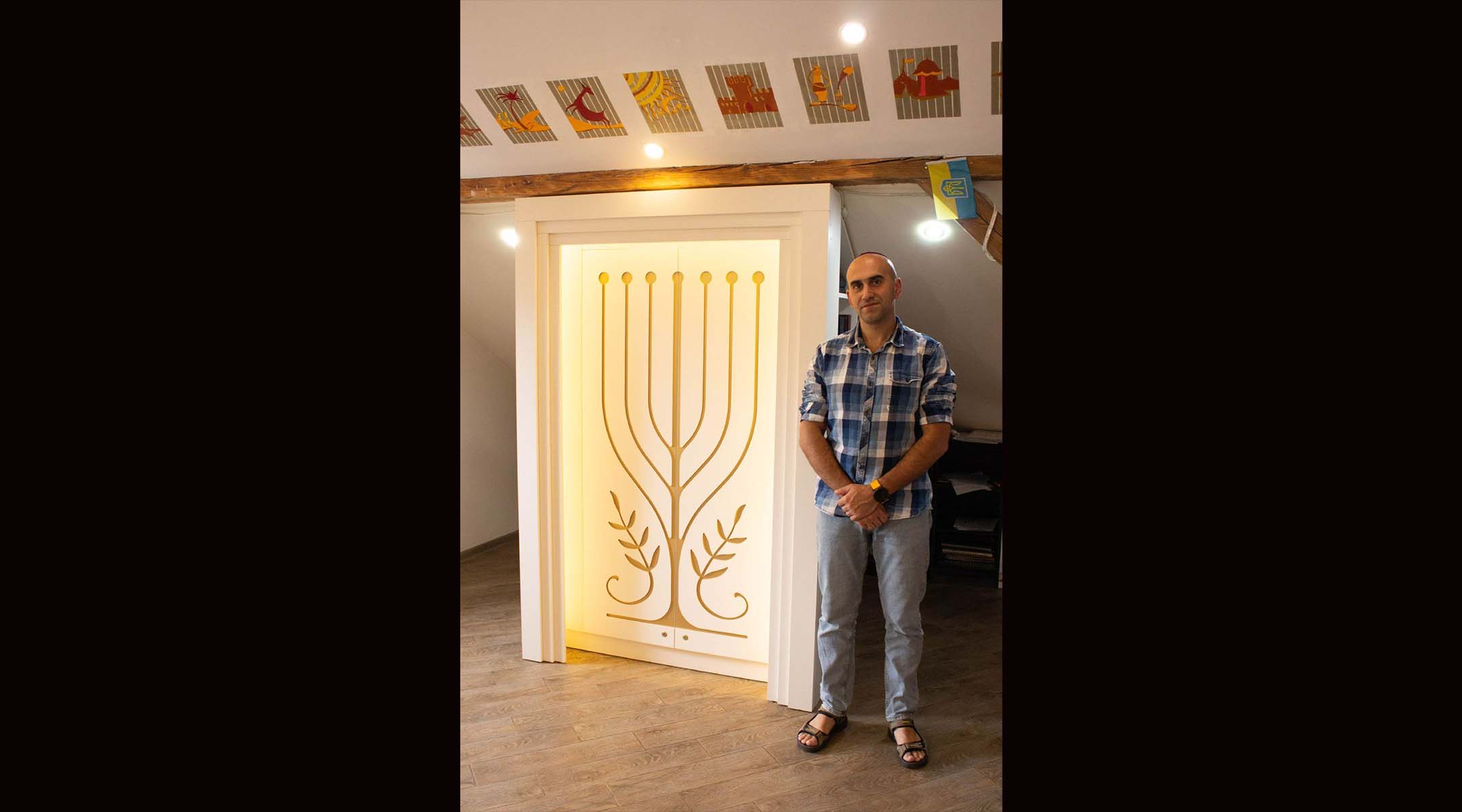 Lev Kleiman is shown with his community’s Torah ark. (Courtesy of the Schechter Institute of Jewish Studies via JTA.org)

Though no Russian missiles have fallen inside Chernivtsi itself, some have reached the outskirts, causing damage to the area’s infrastructure and utilities. Other parts of the country have not escaped the Russian onslaught; two months ago more than 4,000 Ukrainian towns, villages and cities had experienced outages, and 40% of the country’s grid was crippled. The bombing of power stations is a major part of Vladimir Putin’s plan to weaponize Ukraine’s weather to bully the country into submission as winter sets in. (In addition to candles and other supplies, some Jewish groups are sending generators and heaters.)

Home in past years to such prominent Jews as actress Mila Kunis, the late Israeli writer Aharon Appelfeld, former Knesset speaker Yuli Edelstein and the late poet-translator Paul Celan (born Paul Antschel), Chernivtsi has an honored place in the country’s history. On the eve of World War II, some 45,000 Jews lived in the city, about a third of the country’s total Jewish population. The collaborationist Romanian authorities, who ruled the area, established a ghetto in Chernivtsi where 32,000 Jews, including many from the surrounding region, were interned; from there, they were shipped to concentration camps in the nearby Transnistria area, where 60% died.

A third of the city’s Jews survived the war. The population grew to about 17,000 when widespread migration from the USSR began in the late 1980s. Like many cities in the former Soviet Union, Chernivtsi has experienced a modest Jewish revival since Communism fell and open expression of Judaism was allowed again. The revival was spurred largely by the arrival of Chabad emissary couples and programs sponsored by the American Jewish Joint Distribution Committee.

But though Chabad, an Orthodox movement, is the prime Jewish mover in Ukraine, there is also a growing non-Orthodox presence in the country. The Israeli branch of the Conservative movement sent its first full-time representatives to Ukraine a decade ago. The movement’s Jerusalem-based Masorti Olami organization sponsors a network of synagogues, schools, camps, youth groups and kosher certification services across Ukraine. A few decades ago, Kleiman attended the Midreshet Yerushalayim day school in Chernivtsi and Camp Ramah Ukraine.

In addition, the Reform movement’s World Union for Progressive Judaism has established 10 congregations in the country; the movement estimates that 14,000 Ukrainian Jews identify as members. 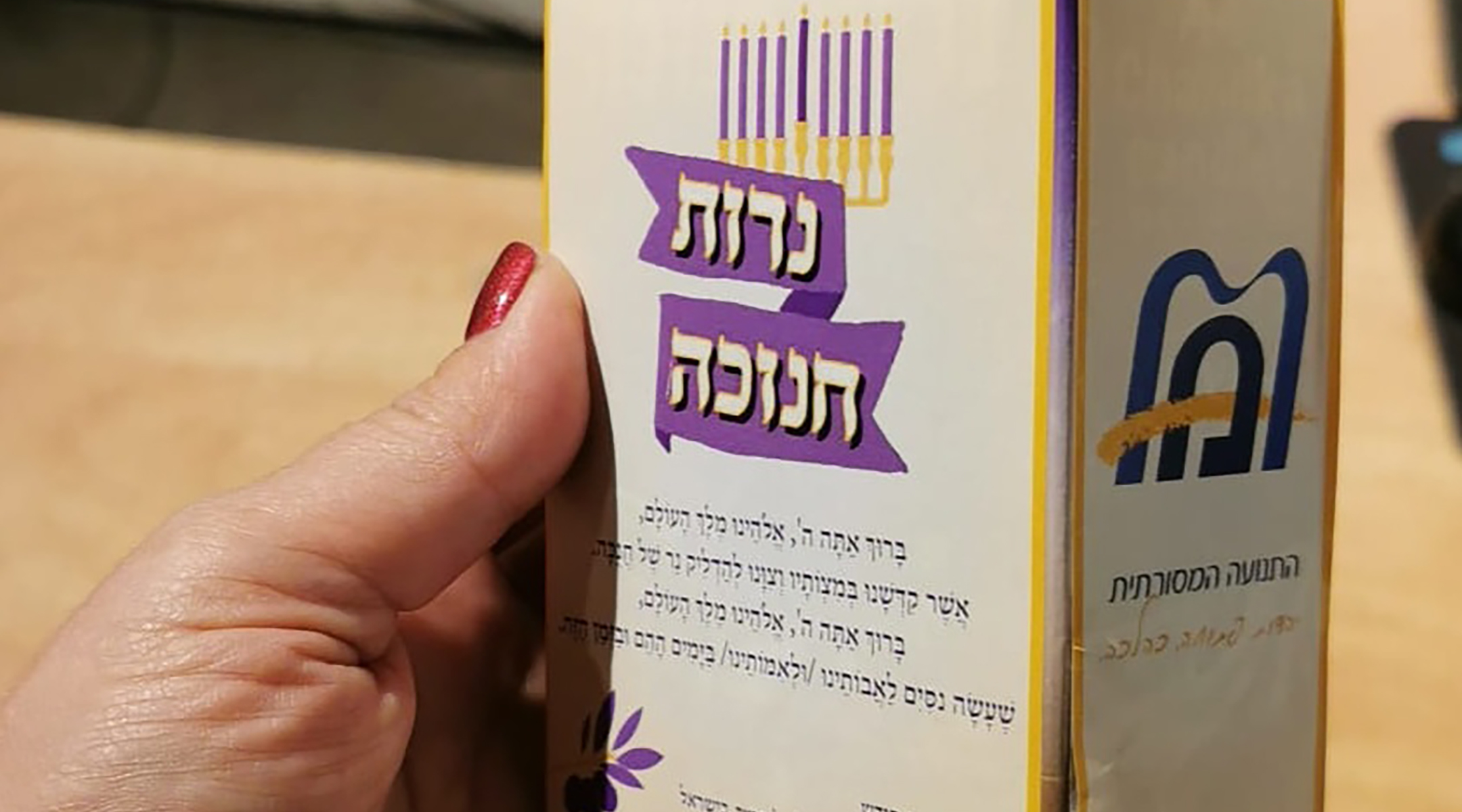 Even though the need is urgent, Kleiman said his community will wait to use the candles until the start of Hanukkah. (Courtesy of the Schechter Institute of Jewish Studies via JTA.org)

These are boring days in southwest Ukraine. TV and radio are only available when electricity is available, and internet and cellphone service is always spotty. Kleiman calls the war a test of the people’s mettle, a spur to their growing national unity. As a form of solidarity, many have switched the language of their conversations from Russian — the lingua franca during the Soviet days — to Ukrainian.

Nobody in Chernivtsi’s Jewish community is starving, Kleiman said. Kosher food is available at the synagogue, and volunteers bring supplies to people unable to travel. Overall, the morale of the Jewish community is good, he says. Native-born members of the community “support each other,” while some people from other parts of the country, separated from their families, with fewer personal connections, are depressed, he said.

In the boxes of materials that Rabbi Gritsevskaya is to bring to Chernivtsi from Israel are also some Israeli-style dreidels, whose Hebrew letters stand for the words “Nes gadol haya po”: “A great miracle happened here.” On dreidels used in the Diaspora, the last word usually is sham, “there.”

The linguistic symbolism in a land under siege is clear, said Kleiman, who plans to explain the message to the members of the community taking home a dreidel.

“I understand — they will understand too,” he says. “I hope the miracle will also happen in Ukraine.”