In late October and early November, as Josh Shapiro’s resounding victory over Doug Mastriano in the Pennsylvania governor’s race became apparent, a new narrative emerged about the Jewish Democrat: Could Shapiro become the future of the Democratic Party in the post-Joe Biden era? And could he run as early as 2024 or 2028?

HuffPost and Rolling Stone both wrote stories along those lines. And they were not far-fetched, either. In his gubernatorial campaign that started in October 2021, Shapiro combined support for progressive culture war victories — like a woman’s right to choose to have an abortion — with support for more conservative approaches to practical issues, like hiring 2,000 more police officers to fight rising crime. And then he got more than 3 million votes and beat Mastriano by 15 percentage points.

But at Shapiro’s election night victory party at The Greater Philadelphia Expo Center in Oaks, his supporters demurred on 2024, saying their candidate might have to wait until 2028 to consider running for president. One woman even said 2032.

Shapiro also remains a great distance from Washington, D.C. The Abington resident and Beth Sholom Congregation member in Elkins Park has yet to serve a day as governor. But on Jan. 17, he will be inaugurated in Harrisburg, and the unglamorous work of delivering for Pennsylvanians will begin.

“Today, I stand before you, humbled and honored and ready to make this transition to serve as Pennsylvania’s next governor,” Shapiro said during a Nov. 16 press conference in Harrisburg with Gov. Tom Wolf, also a Democrat. “And now is when the real work begins to meet these expectations and deliver real results on our economy, on education and public safety.”

Shapiro, though, hasn’t detailed his plans for using his mandate from the commonwealth’s masses to build a safer, more prosperous Pennsylvania. Instead, he has spent the past month focusing on how to transition from the state office he holds, that of attorney general, to the one that will define his legacy in Pennsylvania.

At that Nov. 16 press conference, Shapiro said he will continue serving as attorney general until his inauguration. He mentioned that, by law, Deputy Attorney General Michelle Henry of Bucks County will take over once he takes the oath of office as governor.

Shapiro added that he would announce his intention to nominate someone to the state Senate for consideration as attorney general. He did not make clear if that would be Henry, whom he selected in 2016 because she had the prosecutorial experience that he lacked at the time. (Shapiro had been a state rep and Montgomery County commissioner as well as a corporate lawyer.)

Between his campaign and service as attorney general, Shapiro has worked two jobs at once for over a year. And since his victory on Nov. 8, he has continued with that heavy workload.

The Democrat’s office has announced a series of lawsuit victories that will bring millions of dollars in settlements to the Keystone State. There was $453 million from CVS and Walgreens for their role in the opioid crisis, $38.8 million from JUUL for “deceiving consumers about e-cig safety” and more than $19 million from Google over its location tracking practices.

Shapiro used those types of wins to portray himself on the trail as a candidate who took on “big fights.” It seems evident that he intends to add to that reputation in his final months as the state’s top prosecutor.

As a candidate, he talked about himself as a leader who could bring a diverse coalition, in terms of race, income and political views, together. And he has tried to live up to that reputation in his effort to build a transition team.

The Philadelphia Gay News credited Shapiro with bringing on 13 members of the LGQBT+ community. His transition leadership board includes both CEOs, like Gregory E. Deavens of the Independence Health Group, and labor leaders, like Angela Ferritto of the Pennsylvania AFL-CIO. And his team has brought in leaders from, as a recent transition email put it, Erie to Indiana to Philadelphia.

“We’re going to assemble a talented, hardworking, capable administration, one that looks like Pennsylvania,” Shapiro said. “For anyone who’s willing to take off the red jersey and the blue jersey and just wear the Pennsylvania jersey — you’re welcome to be part of our team.” JE 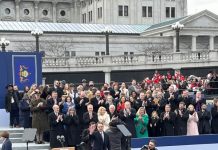 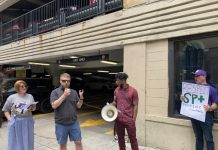