Approved last Thursday by the entire German Cabinet and presented in Berlin by Felix Klein, Germany’s commissioner on antisemitism, the National Strategy against Anti-Semitism and for Jewish Life highlights best practices and recommends new actions to be taken on political and societal levels.

The plot foiled on Wednesday was organized by a group inspired by QAnon conspiracy theories and far-right ideology espoused by parties growing in influence across Europe — including the AfD in Germany. At least 25 people, including a former parliamentarian and former members of German special military forces, were arrested in approximately 130 raids, CBS News reported. The group, comprised of a widespread underground network, aimed to attack the Bundestag, Germany’s parliament.

A rise in the number of neo-Nazis and other extremists in the German military have alarmed officials in recent years. Far-right extremists have been involved in multiple terror attacks, including on a synagogue in Halle in 2019. Federal data showed a significant uptick in antisemitic crimes across the country from 2020 to 2021, but a report this week from the RIAS watchdog group showed that antisemitic incidents in Berlin in the first half of this year dropped to 450 from a total of 574 in the same period last year.

The German government’s new strategy identifies five fields of action: data collection, research and accurate assessment of antisemitism; education as prevention; new approaches to Holocaust remembrance; increasing security; and making current and past Jewish life in Germany visible. The 52-page plan is an answer to the European Union’s 2021 call to action, in which member states were urged to submit national strategies to combat antisemitism by the end of 2022.

“The emphasis on the perspective of those affected is an important sign at the right time for the Jewish community in Germany,” Josef Schuster, head of the Central Council of Jews in Germany, said in a statement. “Especially the antisemitic incidents at the Documenta and the way they were dealt with have shown in a blatant way how Jewish voices are ignored,” he said, referring to controversial works presented at this year’s international art fair, in Kassel.

This is not the first time that Germany has doubled down its efforts to fight antisemitism. Past initiatives have included pro-democracy education, outreach to people who have left extremist groups, projects designed to introduce Jews and Jewish diversity to the non-Jewish public, laws introduced to bar new forms of anti-Jewish expression, and more. Before the anniversary of Kristallnacht this year, the government distributed posters challenging a series of tropes, including comparisons between Israel and the Nazis. 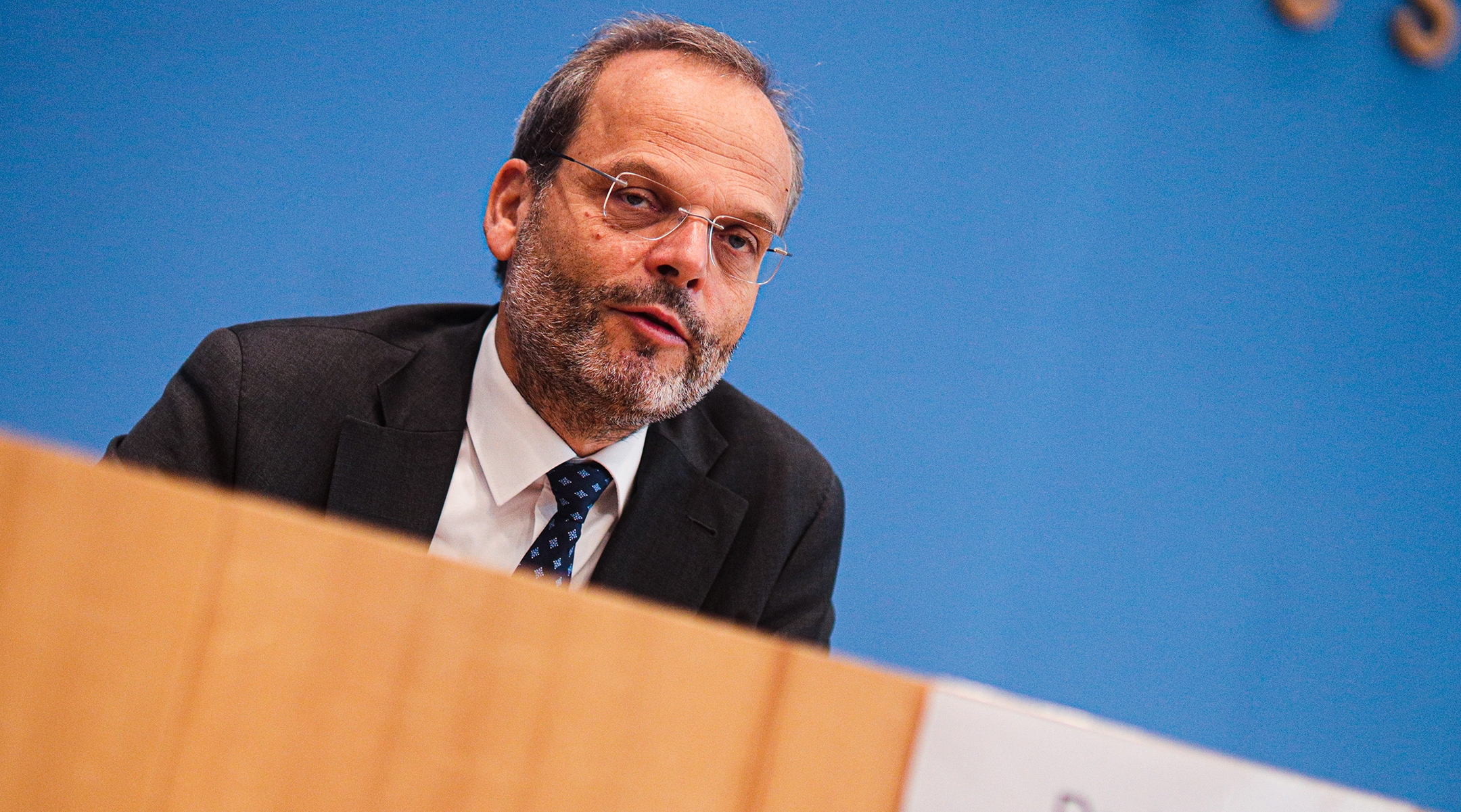 Felix Klein speaks during a press conference in Berlin on Nov. 8. (Christian Marquardt/NurPhoto via Getty Images via JTA.org)

Klein said the new plan aims to bundle and improve existing measures, identify gaps and create “optimal conditions for preventing and combating hatred of Jews.” He referred specifically to antisemitism linked to hatred of Israel, which he said is growing in intellectual and academic milieus. The German Bundestag formally endorsed the working definition of antisemitism formulated by the International Holocaust Remembrance Association, which includes certain forms of Israel criticism, in 2017.

Klein was joined at a presentation of the plan by his colleague on the European Union level: the EU Commissioner for Combating Antisemitism and Promoting Jewish Life, Katharina von Schnurbein, also of Germany, called the strategy “a milestone for Germany” that could “provide important impetus internationally.”

The plan was two years in the making, involving input from all federal ministries and more than 40 Jewish and non-Jewish civil society organizations.

Schuster lauded the strategy for taking up practical issues faced by Jews today, including poverty among Jewish immigrants and antisemitism in schools. It addresses the fact that some schools still schedule exams without consideration for the Jewish calendar — an example of what he said could be called “invisibility.”

“The stated commitment to reconcile exam dates with Jewish holidays is a positive signal that should be implemented promptly,” Schuster said.