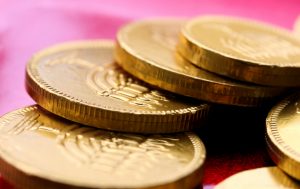 Heard of the Squishmallow? Quirky, cuddly and only $25 a pop, it appears on just about every one of the “must-have” gift lists that thoughtful retailers have compiled to inspire children and strike fear into the hearts of their parents. The season of spending is upon us.

But if the idea of shopping for Chanukah gifts this year fills you with an extra measure of dread, you’re not alone. Rising prices on basic staples have left American consumers with a mild aversion to malls: More than half say they will buy fewer gifts this year due to inflation, according to a recent survey by coupon aggregator Retail Me Not.

Instead of opting for generic brands and smaller quantities, perhaps it’s a good opportunity to revive a time-honored Jewish tradition — Chanukah gelt, which, in its original form, made the “Festival of Lights” a holiday to strengthen the bonds of community and to give without the expectation to receive.

Chanukah gelt first emerged in 18th-century Eastern Europe, but the money wasn’t for children: “Teachers would be tipped or paid then, probably in keeping with the etymological link between Chanukah (‘dedication’) and chinuch (‘education’),” said Eliezer Segal, professor emeritus of classics and religion at the University of Calgary. From there, the custom morphed into an all-out charity bonanza. Chanukah gelt “tours” — when teachers, cantors, beadles and even butchers would go house to house accepting donations — appear frequently in early Chasidic stories.

The custom also made its way into Sephardic communities. Segal noted that in pre-state Jerusalem, yeshivah teachers would walk through the Jewish Quarter on Chanukah singing Ladino songs and collecting contributions.

It was only in the 19th century that gelt was given by parents to children. Though no one is sure why the switch occurred, mass immigration and outside influences played a role. “In America, the need to compete with Christmas presents is, of course, a decisive factor in popularizing the practice,” Segal said. Along with this new incarnation of the custom came its now more familiar chocolate counterpart, a 20th-century Jewish riff on the chocolate Santa.

Today, Chanukah gelt is embraced by those eager to avoid the consumerism of the holiday season. And as an alternative to the Xbox, it certainly caries significant educational value. Children can be encouraged to save or to spend on books and other meaningful purchases, and to give a tenth of their haul to charity, as Jewish law stipulates.

But in keeping with the original spirit of gelt, Chanukah is also a time to give outside the home. They may not be knocking on the door or singing songs outside the window, but there are many charities in the Philadelphia area that provide essential support to Jewish children.

“Contrary to the trivialized Hollywood or Borscht-belt portrayals, Chanukah is an adult holiday devoted to themes of struggle, freedom, miracles and worship,” Segal said.
Treats and gifts are a good way to get the kids involved, but they shouldn’t be allowed to overshadow the deeper values at the heart of the holiday. Chanukah gelt developed long after the Maccabees waged their unlikely struggle against the Greeks, but its focus on tradition and strengthening the institutions that perpetuate it is something they would have recognized.

The Squishmallow is not.

Sarah Ogince is a freelance writer.