Two weeks after feting Donald Trump as America’s most pro-Israel president ever, the Zionist Organization of America had harsh words for the man who aspires to return to the White House.

“ZOA deplores the fact that President Trump had a friendly dinner with such vile antisemites,” ZOA said Sunday in a news release. “His dining with Jew-haters helps legitimize and mainstream antisemitism and must be condemned by everyone.”

The group was referring to Trump’s dinner last week with Ye, the rapper formerly known as Kanye West who came out as an antisemite in recent weeks, and Nick Fuentes, the right-wing provocateur and Holocaust denier. Trump hosted the pair at Mar-a-Lago, his Florida estate, on Tuesday.

Reaction to the dinner was initially muted in the days before Thanksgiving, but over the long weekend, a host of figures denounced Trump for meeting with the two men, though some did so more strongly or explicitly than others. Among Jews, the criticism has come not only from Trump’s longtime detractors but from some of his biggest fans.

“To my friend Donald Trump, you are better than this,” David Friedman, Trump’s ambassador to Israel, said Friday on Twitter. “Even a social visit from an antisemite like Kanye West and human scum like Nick Fuentes is unacceptable.”

Friedman is rarely anything but effusive in praising Trump, whom he once said would join the “small cadre of Israeli heroes” for moving the U.S. embassy to Jerusalem, recognizing Israeli sovereignty on the Golan Heights and exiting the Iran nuclear deal, among other measures. But on Friday, his tone was more pleading as he tweeted to Trump: “I urge you to throw those bums out, disavow them and relegate them to the dustbin of history where they belong.”

Trump for his part said in statements on his Truth Social social media site that he hoped to assist Ye, whom he described as “troubled,” and that he did not know who Fuentes was. (Ye said he had come to Mar-a-Lago to ask Trump to be his running mate in his own nascent campaign.)

“We got along great, he expressed no antisemitism and I appreciated all of the nice things he said about me on ‘Tucker Carlson,’” Trump said of Ye, referring to a Fox News opinion show hosted by Carlson, whose embrace of an antisemitic conspiracy theory has led the Anti-Defamation League to call for his removal. “Why wouldn’t I agree to meet? Also, I didn’t know Nick Fuentes.”

The response was reminiscent of Trump’s swatting-away of criticism after he told the Proud Boys, a far-right group, to “stand back and stand by” during a presidential debate in 2020, in response to being asked to condemn white supremacists from the debate stage. He subsequently said he did not know who the Proud Boys were. (The group later rebranded as explicitly antisemitic.)

Trump’s contention that he did not know Fuentes raised eyebrows for some. Like the Proud Boys, Fuentes is part of the extremist fringe of the Republican Party that has made up part of Trump’s base. The founder of a white nationalist group called America First, he was a leading organizer of the “Stop the Steal” rallies organized by Trump supporters to try to overturn the election results showing that he lost in 2020; he was also present at the rally that Trump addressed preceding the Jan. 6, 2021, insurrection at the U.S. Capitol that aimed to derail the transition of power.

Fuentes, who routinely rails against Jews on his livestream, also attended the 2017 far-right rally in Charlottesville, Virginia, where Trump famously said there were “very fine people on both sides” and more recently has grown close to far-right lawmakers in Trump’s party, including Rep. Marjorie Taylor Greene in Georgia and Rep. Paul Gosar in Arizona.

But even those who took Trump at his word that he did not previously know Fuentes said that was little excuse for dining with him.

Reaction to the dinner kept Trump in the spotlight over the course of a holiday weekend, a double-edged sword for the first Republican to declare a 2024 presidential campaign.  Trump’s rise was fueled by nonstop media coverage, including of seeming misdeeds that did not doom him with his supporters. Still, one Trump advisor told NBC News that the event was a “f—ing nightmare” for the campaign, which has gotten off to a rocky start.

Also condemning the meeting were Jewish organizations that have not hesitated to criticize Trump’s flirtation with extremists in the past, including the American Jewish Committee, the Reform movement of Judaism and the Anti-Defamation League.

The Biden White House also condemned the incident. “Bigotry, hate, and anti-Semitism have absolutely no place in America, including at Mar-a-Lago,” its statement said. ”Holocaust denial is repugnant and dangerous, and it must be forcefully condemned.” (Asked to comment on Trump saying he didn’t know Fuentes, Biden himself told a reporter, “You don’t want to hear what I think.”)

The White House’s statement did not name Trump, nor did statements from many Republicans, including the Republican Jewish Coalition, at whose annual conference Trump spoke last week. The group did not initiate a statement, but, in response to reporters’ queries, released one.

“We strongly condemn the virulent antisemitism of Kanye West and Nick Fuentes and call on all political leaders to reject their messages of hate and refuse to meet with them,” said the statement, first solicited by The New York Times’ Maggie Haberman. The RJC and its CEO, Matt Brooks, retweeted Haberman.

Why the RJC would not name Trump drew follow-up questions from reporters, including Haberman, as well as a barrage of criticism on social media.

Brooks, evidently stung, called such queries “dumb and short-sighted” on Sunday morning and said on Twitter by way of explanation, “We didn’t mention Trump in our RJC statement even though it’s obviously in response to his meeting because we wanted it to be a warning to ALL Republicans. Duh!” 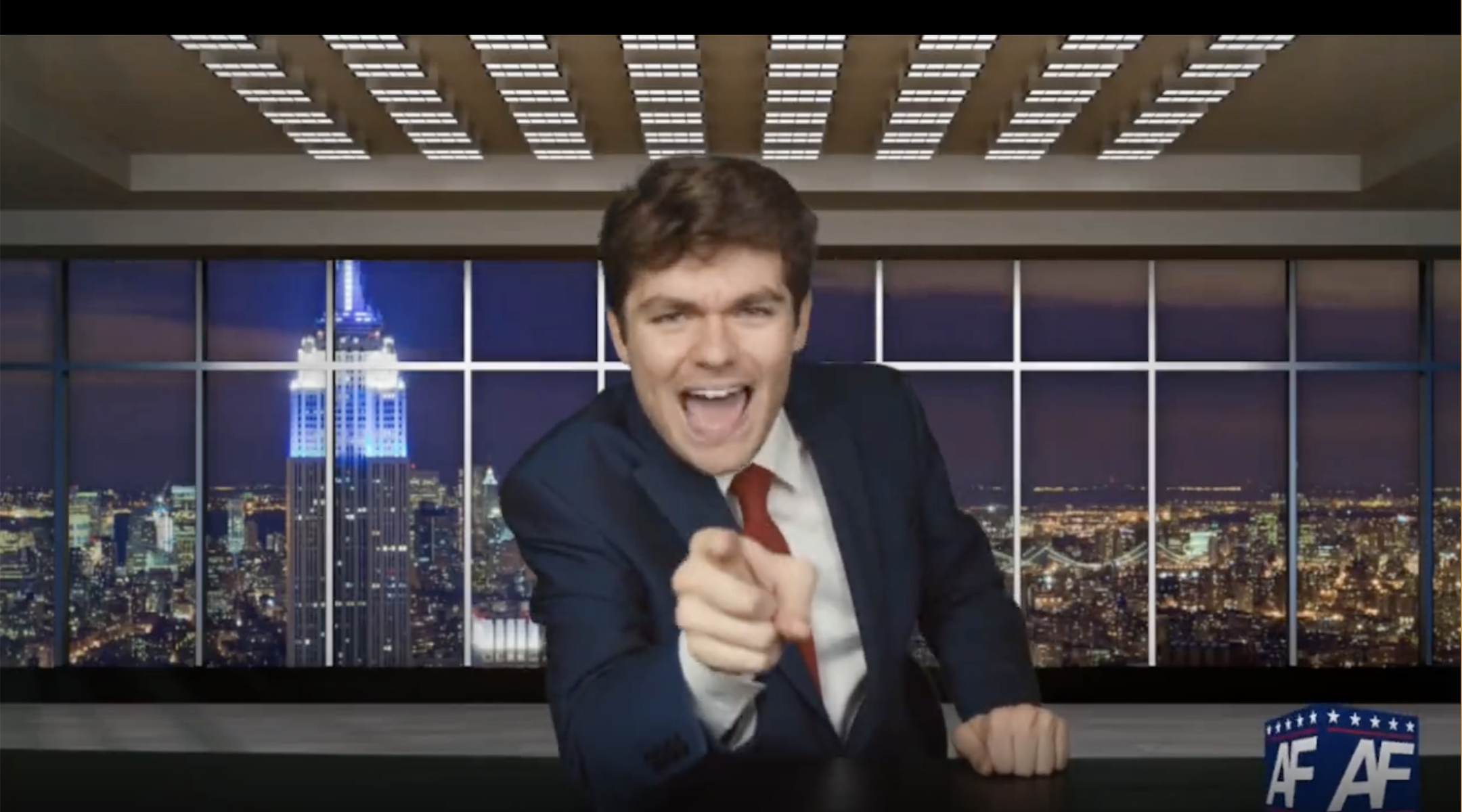 White nationalist leader Nick Fuentes addresses his livestream audience on the day Roe v. Wade is struck down to attack Jews on the Supreme Court on June 24. (Screenshot via JTA.org)

Max Miller, a Jewish Republican just elected to Congress from Ohio, and a former wingman for Trump, also did not name Trump and instead appealed to Ye, who at least until recently had become cherished on the right as a Black Christian conservative, to make a course correction.

“Nick Fuentes is unquestionably an anti-Semite and a Holocaust denier. His brand of hate has no place in our public discourse,” Miller said on Twitter. Ye “doesn’t need to keep walking this path. Letting people like Nick Fuentes into his life is a mistake.”

Prominent Jewish Republicans not making statements included David Kustoff, a Tennessee Jewish Republican congressman; Jason Greenblatt, once a top Middle East adviser to Trump; and Trump’s daughter Ivanka and her husband Jared Kushner, who were both top advisers to Trump when he was president. A spokesman for Kushner did not reply to a request for comment.

Lee Zeldin, the Jewish Republican New York congressman seen as having a future in the GOP leadership after performing more strongly than expected in a failed bid to be elected governor of a Democratic state, also did not issue a statement, and his spokesman did not reply to a request for comment. Zeldin has otherwise been outspoken on Jewish issues in Congress and co-chairs the U.S. House of Representatives Black-Jewish caucus.

South Carolina Sen. Tim Scott, who is the only Black Republican in the Senate and who co-chairs its Black-Jewish caucus, also had not commented as of Sunday night. Scott is believed to be a 2024 presidential hopeful.

Other Republican leaders denounced extremism but did not call out Trump by name. Ronna McDaniel, the Republican National Committee chairwoman known for her closeness to the former president, like the RJC, replied only when asked by a reporter — in her case, from Bloomberg — and did not name Trump.

“As I had repeatedly said, white supremacy, neo-Nazism, hate speech, and bigotry are disgusting and do not have a home in the Republican Party,” McDaniel said.

Meanwhile, former Secretary of State Mike Pompeo condemned antisemitism — but without mentioning Trump, Fuentes, Ye or any of the forms of antisemitism they have expressed. Instead, Pompeo spoke of his own role in undermining the boycott Israel movement — a cause that none of the men who dined together has embraced.

“Anti-Semitism is a cancer. As Secretary, I fought to ban funding for anti-Semitic groups that pushed BDS,” Pompeo said on Twitter. “We stand with the Jewish people in the fight against the world’s oldest bigotry.”

Trump was the ghost in the Republican machine last weekend at the Republican Jewish Coalition’s annual conference in Las Vegas: the declared candidate who party leaders believe still commands the unswerving loyalty of at least a third of the base. With his capacity for lashing out at critics, taking on Trump directly is seen as a fool’s game by many in the party.

A handful of Republicans already known for their open criticism of Trump, including Arkansas Gov. Asa Hutchinson, and New Jersey Gov. Chris Christie, did denounce him by name.

“This is just awful, unacceptable conduct from anyone, but most particularly from a former President and current candidate,” Christie tweeted on Friday.