Longtime obstetrician and gynecologist Dr. Howard Isaacson of Wynnewood, who served in the Air Force after World War II, died May 15 of cancer at Waverly Heights retirement community. He was 99.

During his over-60 year career as an OB-GYN, Isaacson delivered over 10,000 children, including his three grandchildren. He practiced at Philadelphia General, Haverford, Pennsylvania, Presbyterian, Lankenau, and Thomas Jefferson University Hospitals. He was only the second Jewish doctor to practice at Pennsylvania Hospital, according to granddaughter Zoë Slutzky.

“He was really just somebody that everybody could trust,” son Bill Isaacson said.

A member of Adath Israel in Merion Station, Isaacson was a supporter of a myriad of Jewish organizations, including the Jewish Federation, B’nai Brith and the Philadelphia Holocaust Remembrance Foundation.

“He attended synagogue all his life, and he kept kosher, for example, and those values were important to him. [He] raised his family according to them,” daughter Joan Ockman said.

Family members described Isaacson as kind to a fault, which was reflected in Isaacson’s dedication to his job.

Ockman remembers her father taking calls during dinner or in the middle of the night. After late night or early morning deliveries, he’d come home at dawn and promptly leave again for work for his daily office hours.

In the winter, Isaacson would roll down the driveway, jack the car up and tie chains on the tires to drive in the snow.

“We really experienced his profession as his children,” Ockman said.

Born in the Bronx and the grandson of Jewish immigrants in 1922, Isaacson grew up in Freehold, New Jersey. His father eventually owned a clothing and fabrics store that Isaacson would clock hours at, teaching himself customer service and learning admiration for his parents.

“He respected their work ethic, their hard work,” Slutzky said. “That infused the way he approached his career.”

Isaacson planned to become a general surgeon and graduated from Rutgers University in 1943.

Despite Jefferson Medical College’s quota on Jewish students, Isaacson was accepted there and graduated in 1946. The war, which sent many young men overseas, increased university demand for students, giving Jews, women and other under enrolled populations the opportunity to attend.

But Isaacson held his own, Ockman said: “The story he told was he was interviewed and was offered admission on the spot. He was very bright and impressed them with his intelligence, aptitude.”

He interned at the Philadelphia General Hospital in 1947, the same year he was married to chemist June Golove. The couple had two children.

Isaacson joined the Air Force and was assigned to the Maxwell Air Force Base in Montgomery, Alabama, where, instead of performing general surgery, he was asked to deliver babies in the growing baby boomer era.

He also befriended a Palestinian man and his family while living in Montgomery. They were lifelong friends, keeping in touch and exchanging gifts for years.

After his service, Isaacson returned to Philadelphia, where he completed the residences at Jefferson and Philadelphia General Hospitals. He was a practicing OBGYN until his retirement in 2003 and continued to advise patients years after.

After the death of his wife in 1993, Isaacson became partners with Reta Eisenberg, who died in 2018. The two loved to travel.

With a deep love for the theater, Isaacson shared his passion for Shakespeare with his family.

When Slutzky turned seven, Isaacson began taking her to the theater, driving from Wynnewood to Elkins Park to pick her up, and then to Center City to see a show almost every week.

“It was like this totally magical thing,” Slutzky said.

Isaacson was athletic into his last decades and had a love of tennis and ping pong. He was the New York State runner-up in a ping pong tournament as a teenager.

Throughout his life, Isaacson took an interest in the hobbies of his loved ones. He talked about sports and medicine with his son, who is also a doctor, and poetry with his daughter. He kept a garden with Slutzky until his mid-90s.

“He was really a gentleman,” Bill Isaacson said. “A great, great role model.”

Isaacson is survived by his two children, Bill Isaacson and Joan Ockman; three grandchildren; and one great grandchild. 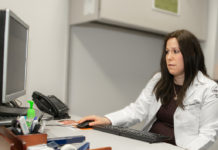