For Howard Klayman and Omar Alsaadi, food is the great equalizer. And it doesn’t hurt that it’s also the industry that’s brought them both success.

The co-owners — one Jewish, one Muslim — of the Middle Eastern restaurant Pita Chip expanded their business with a new brick-and-mortar restaurant in Yardley last month. Their continued partnership-turned-friendship is a testament to the ability of food to bring people together, they said.

“While we’re building a brand, we want to do as much good as we can. That’s something that’s in our fabric,” Klayman said. “We just want to spread our food out there and have people come together, no matter where they are from and hopefully, solve their problems through a meal.”

On its May 18 opening weekend, the restaurant raised money for Congregation Kol Emet, down the road in Morrisville, and Caring for Friends, which provides food and companionship for disabled and elderly isolated community members. Between its opening weekend and other recent fundraisers for the Kisses For Kyle Foundation and Nationalities Service Center, Klayman and Alsaadi raised more than $10,000.

“We obviously want to be good neighbors, first and foremost,” Klayman said.

The business has come a long way since its 2015 opening at Temple University.

Alsaadi, one of Pita Chip’s founders, had a humble idea of opening up a falafel stand by a college campus, reminiscent of his early life growing up in Syria.

“​​I remember buying a falafel sandwich from a falafel stand and standing on the street and eating it with a bottle of soda,” Alsaadi said. “It’s all that stuff brings … childhood memories.”

Alsaadi is not a restaurateur by training. He immigrated to the United States in 1979, studying civil and environmental engineering at the University of Texas at Austin. He went on to get his master’s, but he always had a love for food.

His mother frequently cooked with diverse spices and flavor profiles, something he’s tried to recreate with Pita Chip, describing the restaurant concept as “Tex-Mex-style food with a Middle Eastern flair.”

Along with business partner Mouhanad Kabbani, the two dreamed up something more ambitious than a falafel stand. Three years after Pita Chip’s first opening, the two opened another restaurant in University City in 2018.

It was around this time that Howard Klayman joined the team as co-owner, though he had worked with the duo almost since the restaurant’s inception.

Klayman, like Alsaadi, was not trained to own a restaurant, but his love for the industry runs deep. A self-proclaimed “foodie,” Klayman came from a Northeast Philadelphia Jewish family, who, in the 1950s, was in the pizza business.

Almost seven decades later, Klayman was working in the food distribution industry and was approached by Alsaadi and Kabbani to provide distribution for the budding business.

As Pita Chip grew, so did Klayman’s interest in becoming more involved in the brand.

“I tried their food after their original testing, and I was sold, frankly,” Klayman said.

Though proud of their respective roots and partnerships, Klayman and Alsaadi don’t see the big fuss about being interfaith restaurant owners, though it’s a frequent joke among staff.

“I really don’t think it should be something that a Muslim or Arab and someone Jewish — it shouldn’t be something unusual,” Alsaadi said.

That philosophy is reflected in their food. Falafel isn’t something people usually make in their homes, Alsaadi said. It’s frequently bought at restaurants and stands, which means the variations on the food are endless.

In the greater debate about whether or not falafel is even an Israeli food, Alsaadi shuts down dissenters.

Food variations abound in the Middle East, with different takes on falafel existing even within regions of Syria, Alsaadi said.

It’s a food defined by the region of the Middle East, not a particular country. It’s an Israeli food because people in Israel eat it. It’s a Palestinian and Lebanese food, too.

Food can link an individual to a geographic area, which is both personal to someone with memories of a specific dish, and communal, with individuals all over a region finding joy in a shared cuisine.

“Instead of making it a difference, it should bring people together,” Alsaadi said. 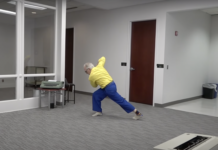 Appeal and Applause: Lawyer Performs Interpretive Dances of Past Cases