After Russian shelling intensified last month and a rocket exploded close to the Zhytomyr home of Nina, 76, she fled for Ukraine’s Polish border. When she arrived several days later after a long trip by car with other Zhytomyr residents, Nina was experiencing severe back pain.

She was directed to the Przemyśl Humanitarian Aid Center, a repurposed shopping mall near the Medyka border crossing in southeastern Poland, where doctors from Jerusalem’s Hadassah Medical Organization, one of Israel’s leading hospitals, have been running the medical clinic since March. There, she received treatment by doctors and Russian- and Ukrainian-speaking nurses who had volunteered to go to Poland as part of Hadassah’s ongoing Ukraine relief effort.

Nina was far from alone.

At what felt like the last possible minute, Elena escaped Kharkiv, Ukraine, with her 13-year-old twins and her autistic 15-year-old son, Daniel, who cannot speak. Janna, 77, who ran from the devastated Ukrainian port city of Mariupol, contracted a severe case of pneumonia during her three-day road trip to Lviv. When Lviv itself came under air attack, the main hospital there discharged Janna and evacuated her to Poland.

All these refugees ended up at Hadassah’s clinic.

“My grandfather’s cousin perished in Bialystok, not far away from where we were,” Rivka Brooks, director of pediatrics at Hadassah’s Mount Scopus campus in Jerusalem, said in an interview from Poland. “Imagine seeing the same Polish scenery and women standing with one suitcase 80 years after the Holocaust, when no one was there for us. You can’t not feel emotional about it.”

Brooks, 52, is among dozens of Hadassah doctors and nurses — both Jews and Arabs — who have volunteered over the last two and a half months for the humanitarian mission, a collaboration among the Hadassah Medical Organization, which operates two hospitals in Jerusalem; the New York-based Hadassah, The Women’s Zionist Organization of America, which is funding the effort; and Hadassah International, the organization’s global fundraising arm.

Dr. Yoram Weiss, acting director-general of the Jerusalem medical center and the person who designed and oversees the Ukraine program, said Hadassah began sending medical teams to the Polish border in early March. Now on its 10th mission, Hadassah already has treated more than 10,000 refugees and plans to maintain its presence in Poland at least through early June.

“It seems the numbers are decreasing, but we’re being very careful because as hostilities increase there’s a possibility we’ll end up seeing more refugees,” said Weiss, 63, an anesthesiologist who spent eight years running Hadassah’s Ein Kerem campus and the last seven months as HMO’s acting director-general. “At least for the next month, we’ll continue to offer our services.”

Most of those services consist of stabilizing patients with urgent health problems, like cancer and heart disease; treating refugees for gastrointestinal issues resulting from poor nutrition during the journey from Ukraine; and providing medications left behind in the rush to evacuate cities under attack.

In addition to running the medical clinic at the Przemyśl refugee center, Hadassah doctors and nurses are treating children at a second refugee center in nearby Korczowa, Poland, and, in partnership with Médecins Sans Frontières (Doctors Without Borders), triaging trauma patients at the border. In addition, Hadassah sent trauma experts to train their Polish counterparts at the Medical University of Lublin, a regional trauma center about 125 miles to the north, in how to handle major traumatic injuries and mass casualty situations.

“Unlike other organizations, our physicians do not come independently, but as a group — four physicians, including two pediatricians, four nurses and an administrator,” Weiss said. “All are volunteers, and sometimes we have more people who want to go than we can accommodate.”

David “Dush” Barashi, Hadassah’s head medical clown, has been one of the medical center’s volunteers, putting sick and often anxious children at ease with his pranks and silliness. It was Dush who noticed a fragile 8-year-old boy and gently convinced him and his mother to come to the clinic, where the boy received a thorough check-up.

“The amount of respect we have gained with the WHO [World Health Organization], Médecins Sans Frontières and the Polish Red Cross is really amazing,” Weiss said. “They look at Hadassah and our impact on treating refugees, and they see us as an example of how things should have been done.”

The Jewish Federations of North America (JFNA) has been supportive. JFNA president Eric Fingerhut visited the Hadassah border clinic and JFNA has given Hadassah two grants to support the humanitarian mission.

Brooks, the pediatrician, who volunteered in Poland from March 28 to April 9, said the most common conditions she encountered were anxiety, high blood pressure, abdominal pain and food poisoning.

Among her patients: a child with cystic fibrosis, a 16-year-old with severe frostbite in her toes, and a multiple sclerosis patient who had forgotten to pack her pills in the rush to flee the Russian bombs.

“It’s very upsetting to see people who fled their country with only a suitcase,” said Brooks, 52. “It’s only women; you hardly see any men.” Men were required to stay behind to fight. “And it took me five days to suddenly notice that the children are very quiet and subdued.”

Ahmad Naama, a senior emergency room physician at Hadassah’s Ein Kerem campus, is one of several Arab doctors who have joined their Jewish colleagues to care for Ukrainian refugees in Poland. 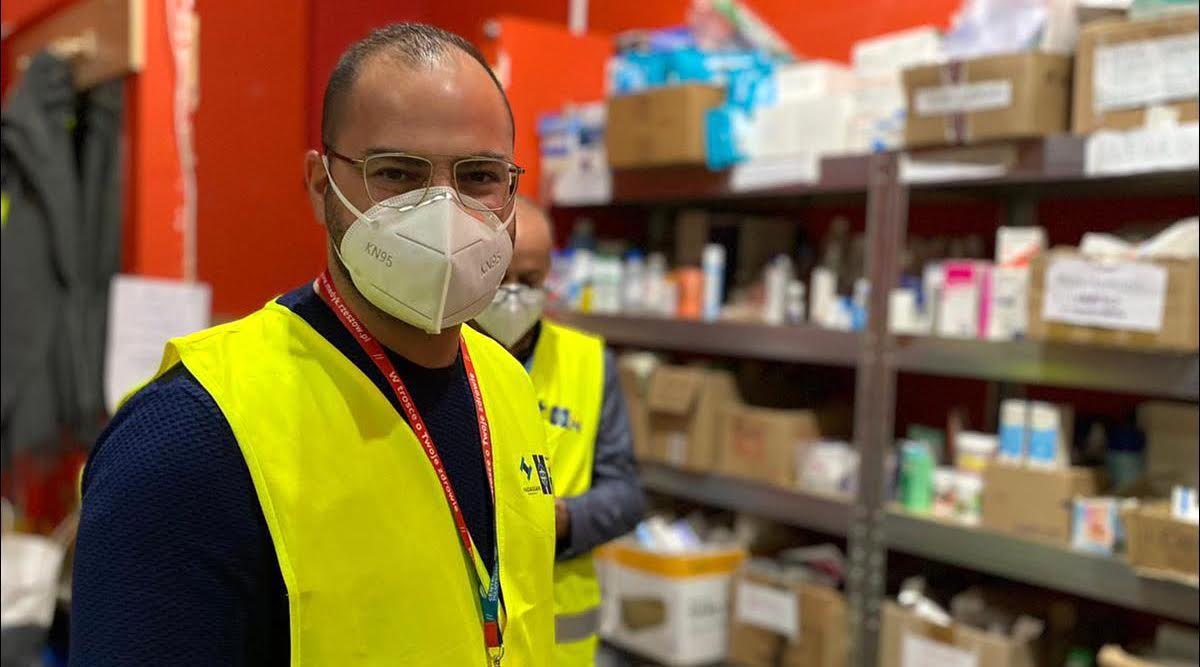 “With my 11 years of knowledge and experience in the ER, I was sure there was something I could offer,” the 37-year-old trauma specialist said when asked why he volunteered for the mission. “I even took an ultrasound machine with me and used it in a few cases. One was for a pregnant woman concerned about her baby. Another was an 80-year-old lady who had fluid in her lungs. We sent her to the hospital, which more or less saved her life.”

During Naama’s stint at the Przemyśl aid center in mid-April, he often saw 150 to 200 patients a day.

“Most of the refugees were close to the areas being bombed and they left. Others were hidden underground for a week or two,” said Naama, who lives in Jerusalem. “They usually leave their medicines behind, and they arrive very stressed, vomiting and with diarrhea — especially the kids, because they were on buses and they’re dizzy and nauseous.”

The ER doctor recalled a boy of 7 — the same age as his son — who couldn’t even urinate because he was so emotionally and physically exhausted.

“It’s very sad what’s happening. This is 2022, and unfortunately, history always repeats itself,” he said. “Ordinary people came to our camp with a small bag, not even a suitcase. They left everything behind and it’s a matter of survival. It’s a disaster.”

Ruven Gelfond, 51, head nurse for orthopedic surgery at Hadassah’s Mount Scopus campus, already had taken part in missions to Ethiopia, Haiti and the Philippines before traveling to Poland. His logistics expertise and knowledge of both Ukrainian and Russian were crucial in organizing donated medical supplies and distributing locally sourced medications.

“We weren’t doing heroic surgery as in Haiti, but our help was critical, and our ability to make quick diagnoses saved lives,” said Gelfond, recalling how one patient developed dangerous bedsores after one month in a damp cellar and another suffered a burst appendix. “Many patients were in severe emotional distress. We provided a modicum of hope in a sea of despair.”

Rhoda Smolow is national president of Hadassah’s American operation, Hadassah, The Women’s Zionist Organization of America, which has more than 300,000 members and supporters and is funding the medical relief effort in Poland.

“I’ve always been exceptionally proud of what our hospitals do, not only for Israeli citizens but for the world,” Smolow said. “We believe that when there is a crisis, we need to act — and act we did.”

“This is an effort that speaks out to the world. My heart breaks for these people,” Smolow said. “We’ve shown the world what can be done in these situations, and the fact is that years ago no one did this for us. So we hope others will act the way we are acting now.”

This article was sponsored by and produced in partnership with Hadassah, The Women’s Zionist Organization of America. This article was produced by JTA’s native content team.
More from Hadassah