Orrin Hatch, who died Saturday at the age of 88 from complications from a stroke after a lengthy political career that made him the longest-serving Republican in the history of the Senate, was a devout Mormon from Utah.

But he used his Mormon faith to style himself as a lifelong friend of Jews and Israel — and the most visible way he showed his adoration was through the mezuzah he wore around his neck.

“It is difficult for me to express the profound reverence I have for the Jewish people,” Hatch said in a May 14, 2018 speech on the floor of the Senate given in support of then-President Donald Trump’s recent and controversial decision to move the U.S. Embassy in Israel to Jerusalem. “As a symbol of my respect, I wear a mezuzah around my neck. I have done so every day for the past almost four decades — actually, more than four decades.”

A mezuzah is a small box that contains a small scroll with Torah verses — and is normally put on the doorposts of Jewish homes. But some Jews have been known to turn them into necklaces.

“The mezuzah reminds me of the affinity that I, as a member of the Mormon faith, hold for the Jewish people and their history,” Hatch continued in his speech. He drew a link between Israel and the state of Utah, which was settled by Mormons in the 19th century following the murder of their prophet Joseph Smith, who had the goal of founding a state in which to practice the faith — and polygamy — freely.

“Both Israel and Utah were founded by religious minorities seeking refuge from persecution,” Hatch said.

Hatch’s professed love of the Jewish people didn’t end with his mezuzah. An accomplished songwriter, he also once wrote and performed a Chanukah song at the request of Jewish journalist Jeffrey Goldberg. The song, “Eight Days of Hanukkah,” was later recorded for Tablet magazine and contained the lyrics: “A small band of people led the way / Through the darkest night they pray / Seeking religious freedom, they / Did more than just survive”.

Hatch told Goldberg he felt “guilty” that he had not yet written a Chanukah song.

When Hatch retired from the Senate in 2019, after being first elected in 1976, he had served seven terms and played a large role in crafting legislation and securing Supreme Court justices that collectively pushed forward a heavily conservative identity. For the last four years of his career, as president pro tempore of the Senate, Hatch was third in the line of presidential succession.

While in office, he made his pro-Israel bonafides well known. He traveled many times to Israel, where he delighted in taking part in Shabbat dinners and referred to the Israel-U.S. bond as “unbreakable.” In 2011, after President Barack Obama proposed that Israel return to its pre-1967 borders as a pretext for peace negotiations, Hatch introduced a resolution calling such a proposal “contrary to United States policy and national security”, a position that aligned nicely with Israel’s then-prime minister Benjamin Netanyahu’s view of the topic. 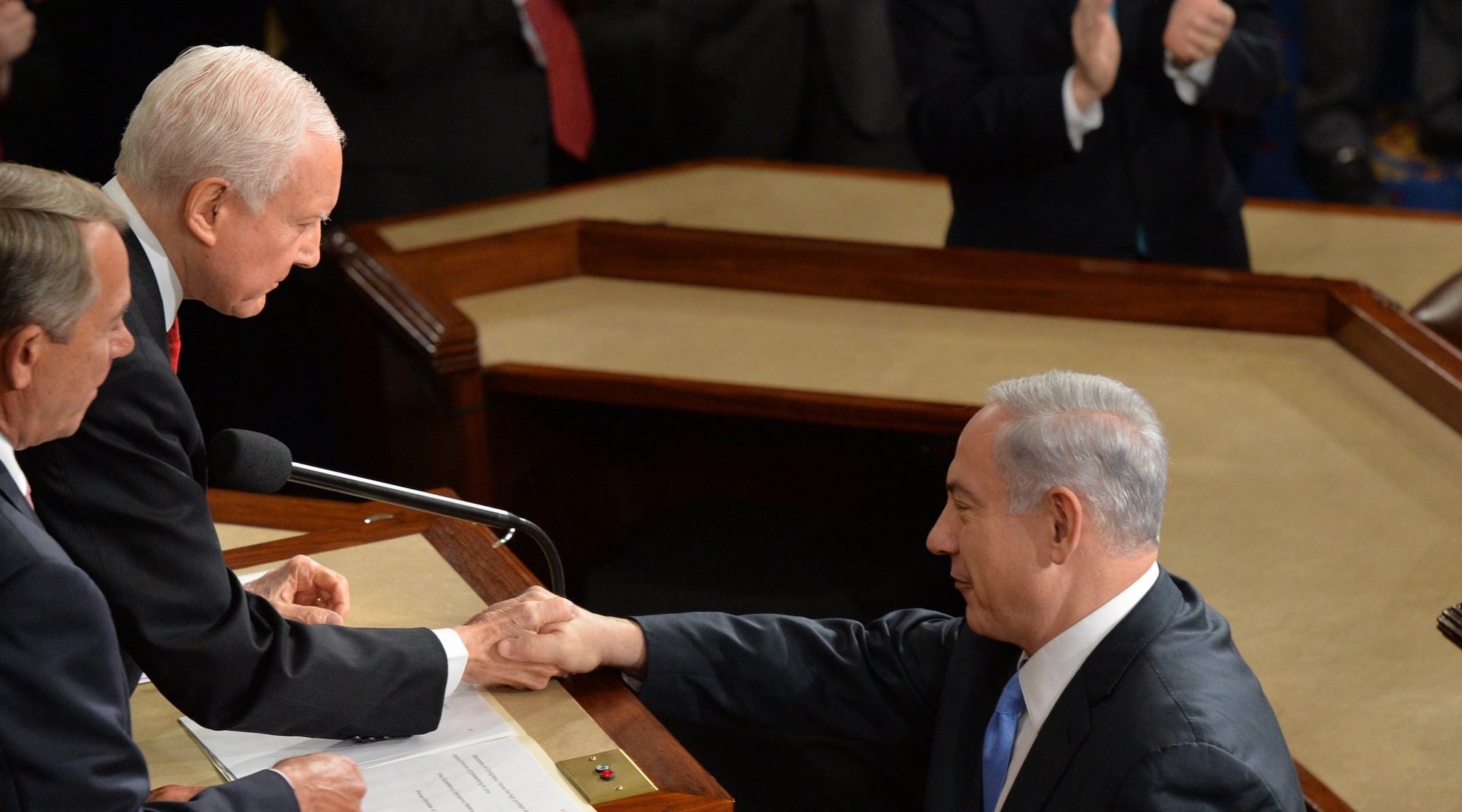 Israeli Prime Minister Benjamin Netanyahu shakes hands with Hatch before he addresses a joint meeting of the U.S. Congress on March 3, 2015.(Nicholas Kamm/AFP via Getty Images)

When Netanyahu delivered his joint address to Congress in 2015 in an effort to pressure the United States to abandon the Iran nuclear deal, Hatch was positioned right behind him on the dais.

Hatch’s passing was mourned by the pro-Israel lobbying group AIPAC, which tweeted that he “had a genuine affection for the Jewish state.” Nathan Diament, the executive director of the Orthodox Union Advocacy Center, said that Hatch was also key to passing religious freedom laws that benefited the Orthodox community.

“He very much internalized that, in a way, he identified with the Jewish experience,” Diament said.