Israeli police raided Al-Aqsa mosque during riots on the Temple Mount in Jerusalem, a rare incursion that headed off for now tensions stoked by the confluence of Passover and Ramadan.

After police quelled the riots, some 60,000 Palestinians prayed at the site holy to both Jews and Muslims.

Palestinian first responders said over 150 Palestinians were injured in the clashes and Israeli police said three of their number were lightly injured. Palestinian rioters inside the mosque lobbed objects and explosive devices at police, who were positioned in the plaza outside the mosque. That prompted the rare entry into the mosque. Police fired rubber bullets.

Tensions during Ramadan last May culminated in days of rioting in Jerusalem and a deadly conflict in the Gaza Strip.

Palestinian militant groups have been calling for increased confrontations in recent days, and police kept Jewish extremists from sacrificing a goat on the Temple Mount to mark the Passover holiday, which begins Friday evening.

Friday is also Good Friday, and Christians were expected to visit holy sites not far from the Temple Mount throughout the holy weekend. 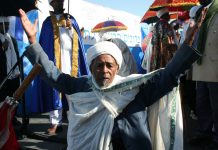