Instead of finding a community at graduate school, Zo Baker, 29, found the experience to be rather isolating.

While pursuing a master of fine arts at the University of Pennsylvania, they were surrounded by like-minded artists, but lacked Jewish colleagues who could meaningfully engage with their pieces inspired by Jewish ritual and culture.

But the void of a community to engage with and provide constructive feedback on Baker’s art distilled an important value to them: “This spirit of inquiry is embedded in Jewish culture. It’s OK to ask questions and create space for our histories and traditions on our own terms.”

Now a 2022 Tribe12 fellow, Baker, who grew up in Queens, New York, hopes to rectify the lack of Jewish-specific spaces in the art world by creating an artist-in-residency program, providing resources for Jewish artists to hone their craft and foster a purposeful community along the way.

The artist and educator will pilot the program this summer.

How does your art incorporate Jewish ideas?

I come from a sculpture background, and I do a lot of large-scale installation work. Most of my work involves some sort of storytelling component that, whether it feels explicitly Jewish or not, I think is inherently rooted in my own Jewish upbringing, and I think the way Jewish conversation styles and customs and the rituals I grew up with for many years now.

And usually my goal, like I said, whether it’s inherently doing or not, is to really encourage the spirit of community-building and connection and create spaces where people are excited about asking questions, and of curiosity and play, so that’s taken many forms.

Can you give an example of this?

One of which was an archive project about intergenerational relationships, specifically with your grandparents, and collecting archive materials, doing an oral history project, where I was collecting stories from many people about their experiences with their grandparents and how that shaped their identity.

I built the physical installation using my own family archives because both of my grandmother’s had passed away a few years prior, and I had inherited a lot of their clothing and objects. And [I was] just considering what it means to give these objects, especially these clothes, a new life with a new generation because I was just wearing, you know — I got all these coats, and I would wear them out and do often.

Have you found that your Jewish identity has changed since beginning your art on these topics?

Hugely. I grew up and went to Hebrew day school, pre-K through eighth grade, so I have that foundation. But then I went to a public arts high school in Manhattan, and I was exposed to a million different other people and wanted to have so many much more varied experiences.

Throughout high school and in college, I really went out of my way to avoid Jewish communal experiences, especially in college because my school did not have a Hillel. Really, the only Jewish organization on campus was Chabad, which doesn’t resonate with me.

And then I came to my thesis project, which was called “Dining Dreams,” where I was inviting people to Shabbat dinner. So I built out a Kabbalat Shabbat service, I wrote all my own prayers and poetry and started leading, basically a short Shabbat service along with this dinner series.

Every time we did it, we talked about what people wanted and what people needed, and every single time we did it, we revised the rituals. Through doing this, a lot of my friends who were just from art school, who I’ve never connected with Jewishly — suddenly we have this Judaism that we could all engage with on our own terms in our homes and not have to go somewhere and abide by somebody else’s rules.

Would you say that you’ve tried to reclaim your Judaism?

I would say I am a work in progress. I am very much in the process of reclaiming my Judaism, and I think that that’s something that I want to be ongoing in my life.  It’s an ongoing process that I’m very invested in, especially right now.

What do you mean “especially right now”?

My formal education is finally over. And the routines, the schedule, the calendar I’ve been adhering to my entire life doesn’t exist anymore; it doesn’t apply. But the Jewish calendar still does, and that’s something that I can find grounding. I’m moving into the next stage of my life. And I think that as I move more towards what we would consider traditional Jewish life stages, it’s important to really figure out what my values are and what I want to do so that I can feel greater agency over my Jewish life in my adult life.

A lot of your art is focused around food. Why is that?

There’s just so much material in Jewish food.  Let’s say people who have used the “Maxwell House Haggadah” for the last 30-40 years — God knows how long the “Maxwell House Haggadah” has been around — they will still make a brisket. They don’t know why, necessarily, but they’re making these Jewish foods. Like, why are we so obsessed with bagels? People don’t necessarily know the history of bagels and bialys, but it’s part of their life.

Food is really an exciting and valuable entry point to exploring these topics. Because even if somebody says, ‘Oh, I don’t know anything about Judaism,’ they know Jewish food. JE 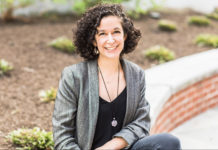 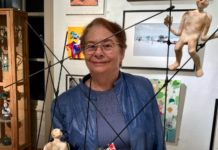