Christopher Lawrence doesn’t remember the first Golden Slipper Gems event he attended four years ago, but he does remember the company he kept.

“There’s a very coherent group of folks here, a regular group of folks who’ve been going there for years,” Lawrence said. “So it was just very nice to meet in that context and to get to know each other.”

Attending a lecture with his brother-in-law, Lawrence was not only struck by the unique chance to spend time with a family member but with the opportunities to spend time with like-minded folks — those who shared his love for learning — which he valued as a former educator.

Though Lawrence was new to Golden Slipper Gems, the organization was hardly new to the concept of creating community through people-oriented programming.

Golden Slipper Gems is part of the three-pronged Bala Cynwyd-based organization Golden Slipper Club & Charities, which also includes Golden Slipper Camp, which will celebrate its 100th anniversary this month. A gala will be held on March 26 at 6 p.m. at the Cescaphe Ballroom at 923 N. Second St.

Over the past century, Golden Slipper has served the Greater Philadelphia community through programming for older adults at two campuses and a summer camp serving 500 kids and providing scholarships and financial aid to those who need it.

The organization’s Passover League, now a part of Gems, gives hundreds of Jews a seder to attend, who otherwise wouldn’t have had a place to go; and Gems’ Human Needs and Services program gives aid to those in and outside the Jewish community who may need a dental procedure, a wheelchair, a roof repair, among other needs.

Though the organization’s format and programming have changed, the goal of serving the community was baked in from the start:  “What I can tell you is not going to change is the need will still be there,” Golden Slipper Club & Charities Board President Dave Simon said. “Where the need is in the Jewish community and the greater community, Golden Slipper is there.”

Golden Slipper had its genesis at the poker table when, in 1922, a group of Jewish Masons met to play cards and split their winnings. They delegated the monies to community members in need of essential goods, like coal or milk, the organization’s website said, which was the prototype of the HUNAS program on which the organization still prides itself.

A quarter-century after its founding, the Golden Slipper Square Club approached the Jewish Federation of Greater Philadelphia and asked which demographic was more in need: the elderly or youth. The Jewish Federation identified youth as the priority, and the Golden Slipper Square Club immediately began searching in the Poconos for grounds to place a summer camp.

After scouting 15 locations, the organization originally settled on a site in Tobyhanna, but after the landowners found out about the organization leaders’ Jewish identities, they backed out of the deal.

Providing financial aid to the camper was always a priority — and a practice that persists today — with only 15% of families paying the full camp fee of about $12,000, according to Golden Slipper Camp President and former camper and counselor Dean Siegel. The Jewish Federation’s One Happy Camper partnership helps sustain this, with campers able to receive grants of $1,000.

“When everyone comes to camp … and gets on the buses, all the outside and all the home stuff is left behind,” Siegel said. “And when you get to camp, everybody is the same.”

Rosen estimates that Golden Slipper Camp has served more than 100,000 campers over its 73 years and said it is the only remaining community camp from its time.

In the 1960s, the Golden Slipper Square Club changed its identity, choosing to drop “Square” from its title as a result of also dropping the club’s Masonic requirement, a decision of which Rosen was a part.

“We noticed that we weren’t getting younger members to join Golden Slipper,” Rosen said. “At the time, there were only four of us in the club that were under 30.”

Because of the organization’s affiliation with the Masonic Order of Pennsylvania, only men were allowed to be members of Golden Slipper Club, another stipulation that limited membership.

“In the ’70s, the women’s movement started to take hold, and women were achieving places in the philanthropic world on their own, not on their husband’s dime,” Rosen said. “It became evident: Times change, then the organization changes.”

Golden Slipper Gems is the youngest offshoot of the organization, founded in 1995 as the Golden Slipper Center for Seniors in Wynnefield Heights. Before that location, Golden Slipper had a residential home in Northeast Philadelphia called the Uptown Home, which Golden Slipper operated from 1985-2006.

Gems now has locations at Adath Israel on the Main Line in Merion and Shir Ami in Newtown. In 2018, the organization rebranded, becoming Golden Slipper Gems.

“One word that kept coming up over and over again when talking about the staff, the people who attend, the volunteers, just everyone involved in it — we’re all gems,” Golden Slipper Gems 2019-2021 past President Jill Caine said.

But 2018 hardly saw the last of the organization’s changes. At the onset of the pandemic, Golden Slipper Gems and Club & Charities shifted its operations to be entirely digital. Gems staff taught members how to use Zoom in a matter of weeks, and online programming was able to keep attendance up to a couple of dozen members per event.

“We do have a lot of older adults, who the virtual has been fabulous for them because they’re sickly or not able to get to the program,” Caine said. “So it’s opened up another way of getting our programming to them.”

During the pandemic, Gems’ goal of providing “lifelong learning” and connection for older adults became more important to Caine.

“The mission became more urgent, honestly,” she said. “Because socialization and moving away from isolation were so important during COVID.”

Though the shift to digital platforms was speedy and unexpected, Simon can’t imagine Golden Slipper without a digital component, hoping to continue hybrid programming as the pandemic hopefully winds down.

With a new interim executive director in former Jewish Federation of Greater Philadelphia Chief Operating Officer Steve Rosenberg, the organization is looking to continue to adapt to the changing times.

“We have not survived 100 years by having folks who just write the check,” Simon said. “We are a hands-on, volunteer-driven organization across the board.”

In addition to just being practical, the hybrid programming is another way that Golden Slipper needs to adapt to the changing times, and it provides an opportunity for the organization to attract younger crowds, a struggle that has remained unchanged over the past several decades, Rosen has noticed.

“Most membership organizations have suffered,” Rosen said. “Certainly during the last 20 years or so, people are just not joining organizations.”

Simon is not sure if, moving forward, Golden Slipper members will even be called “members” anymore, fully expecting the landscape of club organizations to continue to change. While he’s prepared to make some changes, he plans to keep the core of the organization intact.

“We’re not trying to reinvent the wheel,” Simon said. “What ties all of us together is the affinity of the good work that we do.”

For more information about the 100th-anniversary gala, visit
goldenslipperclub.org/event/gala. 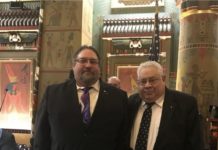 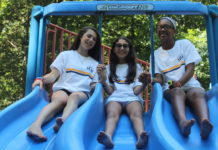 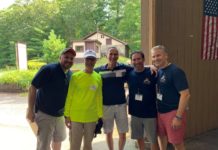