Larry Liss, a pathfinder-turned-pilot in Vietnam, was given a simple mission on May 14, 1967.

Liss was to assist pilot Tom Baca, who was to retire in the coming days, in taking the military chaplain to the outlining special forces unit for Sunday services.

When they landed and dropped off the chaplain, Liss and Baca heard commotion over a radio communication — 100 of their own men were surrounded by Vietnamese soldiers deep in the thicket of a bamboo forest in Cau Song Bae.

Liss and Baca jumped back into their helicopter, which was unarmed and not meant for combat, and flew through the thicket — back and forth — more than six times, each time pulling wounded men into the helicopter and dropping them back off at the base.
At day’s end, what should have been an easy task turned into a medical evacuation of 87 U.S. soldiers, Liss remembered.

Larry Liss’ brother Art Liss believes his brother is deserving of far more recognition than he received for the mission. He’s been working for the past 14 years to procure his brother a Silver Star or a Congressional Medal of Honor to no avail.

Larry Liss, however, “couldn’t care less” about a Silver Star.

During his three years in the military, he received 25 Air Medals, one for Valor, the Bronze Star, three Purple Hearts, the Valorous Unit Award for extraordinary heroism, National Defense Service Medal, the Meritorious Unit Commendation, Vietnam Service Medal, the Vietnamese Campaign Medal and the Distinguished Flying Cross for Valor for his rescue mission in Cau Song Bae.

His story was documented in a 2009 Windfall Films documentary series “Helicopter Wars: Vietnam Firefight,” where he was featured alongside Baca.

Larry Liss’ only reasons to have interest in the Silver Star are two-fold: He would be able to then nominate fellow soldiers for similar accolades, and he would bring awareness to the few Jews who have received honors for their time in World War II and Vietnam in particular.

According to Larry Liss, of the 1,500 cadets in his year at the Pennsylvania Military College, now Widener University, there were 11 Jews and one Black cadet. According to the National Museum of American Jewish Military History, only 18 American Jews have received the Medal of Honor since the Civil War.

As Vietnam vets reach their 70s and 80s, the urgency to recognize them
has grown.

Art Liss survived lung cancer five years ago, a feat that reminded him of the urgency of this project.

The lack of documentation of the event has not been Art Liss’s friend.

Philadelphia-based military lawyer Earl Kauffman said that is the main reason for veterans having to go through an “arduous process” to receive honors.

There are only two official records of the Cau Song Bae mission: citations from Liss and Baca, but not a commanding officer. Art Liss has tried to reconstruct eyewitness accounts, but it’s challenging as more time passes. The mission was 55 years ago.

“I got picked on so much; I got abused so much,” Larry Liss said of his time in military school.

He encountered further antisemitism in Vietnam and butted heads with his flight operations officer, at one time punching him.

After the Cau Song Bae mission, Liss was berated by his commanding officer for conducting a mission other than the one he was assigned and for using an aircraft in a combat situation that was not meant for combat.

Therefore, he did not confer with Liss and Baca and document the event — and vital evidence of the mission is missing.

Art Liss has enlisted the help of Pennsylvania legislators for his project but is growing frustrated with the lack of transparency he’s gotten from the Military Awards Branch who have turned down his requests with little explanation.

“We will have violated the ethics of the military, of their major ethos, which is, ‘Leave no soldier behind,’” he said. 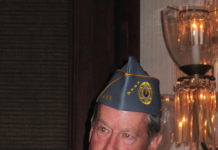