The Boston Red Sox released a minor league player following an antisemitic and homophobic social media outburst, in which he specifically targeted the organization’s chief baseball officer, Chaim Bloom, who is Jewish.

Brett Netzer called Bloom a “fraud,” “an embarrassment to any torah-following jew” and attacked him for his support of Black Lives Matter and the LGBTQ community. Netzer also questioned Bloom’s Jewish identity.

In another bizarre tweet, Netzer responded to a critic by saying, in part, “I am a racist.” Some of his posts targeted Black people, and others attacked transgender people. As of Monday afternoon, Netzer’s Twitter account no longer exists.

The news of Netzer’s release was first reported by Chad Jennings, who covers the Red Sox for The Athletic. Netzer responded to Jennings’ tweet, which is shown below, by taking issue with the characterization of his comments as antisemitic. 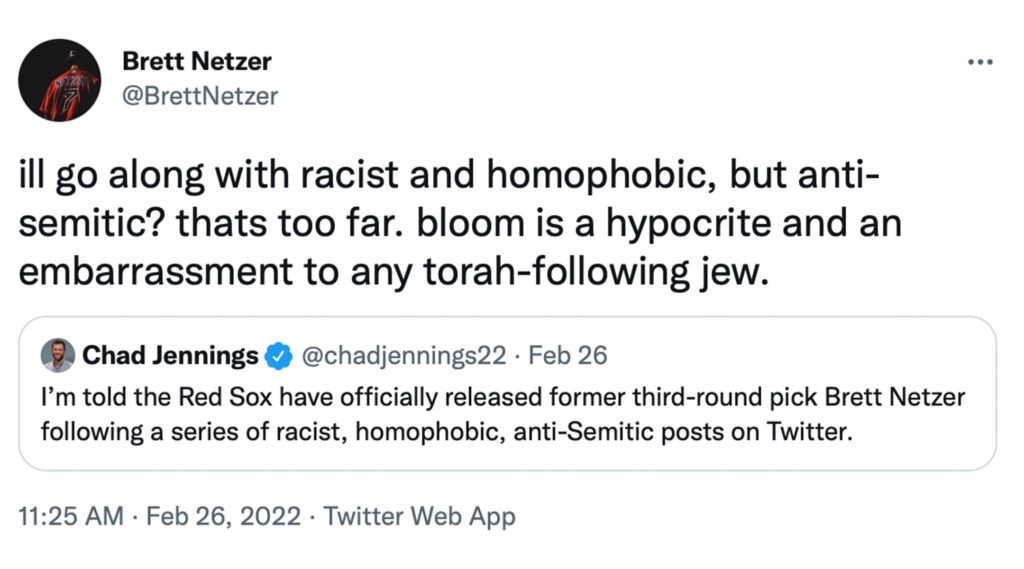 The Jewish Telegraphic Agency did not receive a response from the Red Sox in time for publication.

Netzer, 25, was drafted in 2017, and last played in 2019 for Boston’s Double-A affiliate, the Portland Sea Dogs. The 2020 minor league season was canceled due to the pandemic, and Netzer was placed on the restricted list in 2021 for undisclosed reasons.

Bloom, who joined the Red Sox front office in 2019, is a Shabbat-observant Jewish day school graduate. When Bloom ran baseball operations for the Tampa Bay Rays, Tablet reported that his family lived walking-distance to the ballpark so Bloom could avoid driving on Shabbat.