Though the winter 2020-’21 Penn-Jersey Athletic League basketball season was canceled due to the pandemic, the Kohelet Yeshiva and Jack M. Barrack Hebrew Academy girls’ basketball teams were far from idle in the season that never was.

Kohelet coach Kevin Scholla hosted voluntary practices for players to build skills for the 2021-’22 season and had graduating seniors show up, even though they knew they wouldn’t play another game in their high school careers, to support the team.

The unconventional coaching practices during last year’s non-season paid off. This year, both Kohelet’s and Barrack’s girls’ basketball teams achieved some of their respective teams’ best results.

Kohelet Yeshiva became district champions and made it to the top eight in the conference championship for the second year in a row, its highest finish ever.

Scholla attributes his team’s success to its aggressive “Dobermann defense.”

Because of their focus on a good defense, anyone on the team can try to be aggressive, regardless of height or skill set.

“That doesn’t mean you’re going to do it well, but you can do it as best as you can,” Scholla said.

The team has a “deep roster,” meaning Scholla has encouraged his players to “accept their roles,” big or small, to minimize conflict on and off the court.

While Rochester also advocates for players knowing their roles, he implemented a new offensive strategy where the ball is constantly moving, as players aggressively pass and cut.

​​“They used to run a lot of set plays where things were very kind of robotic and designated for certain people to touch the ball at certain times, and this is a little bit more equal opportunity,” Rochester said.

Though COVID gave the coaches and players an opportunity for fresh starts and new strategies, it’s also presented its fair share of challenges.

“We’ve had a few different times where we’ve had girls out due to testing positive. Our school, while it is an inconvenience at times, we’ve had a very tight COVID protocol, so we always wear masks on the road,” Rochester said.

The Barrack team also wears masks and social distances as best it can during practices, even wearing masks during games. In most cases, opponents go maskless.

“It is hard sprinting in masks, and when we play teams that don’t play with masks, we are at a great disadvantage,” Barrack senior player Arielle Zabusky said.

However, players aren’t resentful of the mask-wearing. Senior Jessie Singer said that the school’s strict COVID protocols “instilled in all of us a higher purpose in keeping our community safe.”

Scholla said that Kohelet’s team has had games canceled at a moment’s notice due to members of opposing teams testing positive.

The team also didn’t have a bus driver this year, and players and parents carpooled to every game, something Scholla said “showed a lot of commitment.”

“I love hearing girls clap and say ‘her’ name, just excited for each other, not just for themselves,” Scholla said. “So that’s made them a real team.”

Kohelet and Barrack also find themselves in situations unique to few other teams. They represent the Jewish community in a secular league.

“As teams play against us, that’s certainly something that they’re aware of,” Rochester said.

According to Singer, many of the teams in the league haven’t interacted with many Jews on or off the court.

“Our whole team works hard to emulate ideal sportsmanship values, both because it is the proper and respectful way to play, but also because we want to make sure we are giving a good, kind name to the Jewish people and acting in a way that is representative of Jewish values,” she said. 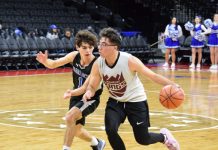 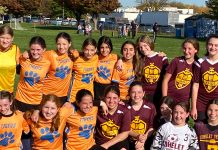