As we head into spring, only one thing is certain in the interior design market: A lot of things are happening at once.

To go over them all, the Jewish Exponent talked to three designers in the Greater Philadelphia area.

In September, Erdosi talked about how, during the pandemic, with people home more often, houses and apartments were becoming “multifunctional.”

A breakfast nook could be for eating the day’s first meal or working from your laptop, for example. A bedroom could be for sleeping or taking a Zoom meeting.

But now, post-omicron, according to Erdosi, clients are emerging from their homes, or “survival mode,” as she describes our collective approach to 2020 and ’21, and looking out again. The designer, due to this development and her background in commercial design, has made like her customers and shifted back toward focusing on it.

Clients are starting to ask her the question that most white-collar participants in the economy are asking: What’s the future of the office going to look like?

Since Erdosi is a designer, it’s her job to at least have an inkling of an answer.

“I’m looking at creating a hospitality, kind of kitchen vibe,” she said. “They can eat there and maybe they have meetings.”

The owner’s intention is for the office to not feel like an office, she added.

Her designs are open, with booth seating and plug-ins. They are for people to sit down, eat and then work for a morning or afternoon. They are also for workers to have meetings with each other, both formal and informal.

One of Erdosi’s clients is asking for that kind of layout with the understanding that its employees will no longer come in eight hours a day, five days a week. But it does want the office to be there for people when the company needs them or when they want an office space themselves.

The new office, essentially, at least according to Erdosi’s design, will be a place where workers want to go, not a place where they have to go.

“Something that’s fun,” she said.

For both commercial and residential projects, Daroff sees a similar trend. She calls it “inside-out spaces,” or outdoor spaces that can be used the same way people use indoor living rooms: to hang out.

Restaurants have recaptured parking lots and streets for outdoor dining; while apartment complexes, condominium buildings and even senior living facilities have added features like pool decks and lounge areas.

Daroff says this trend, like so many others, emerged out of the COVID crisis.

In 2020 and ’21, area residents started to rediscover the great outdoors after spending so much time in their homes. They also developed a more acute sense of how people spread illness and a related desire to trade small spaces and large groups for open spaces and smaller groups.

And with her commercial office projects, Daroff is noticing a similar theme. Like Erdosi, she is designing office spaces to be for gathering as much as working.

Many of Daroff’s office blueprints include open kitchen areas.

“It becomes a hub of the office,” she said.

Kaplan understands the macro developments in the interior design industry. He has been in the business for 30 years, and his family has been in it for 100 years.

And he says that today, in line with the multifunctionality and sociability of so many spaces, customers want furniture to withstand heavy and continuous usage.

Customers are investing more in furniture and, more specifically, in pieces that are both casual and durable, according to Kaplan. On top of furniture, customers now prefer a fabric called Crypton that is known for being, as Kaplan described it, “super durable.”

“People can spill red wine on it and not have to worry about it,” he said.

But this approach has a downside, according to the owner. Casual, durable pieces are not fancy; so their aesthetics don’t vary much from each other.

It’s also not unique, he added.

“It’s kind of like vanilla and chocolate,” he concluded.

The new aesthetic moves in both market directions. Companies save money by making simple designs. But customers today are also less concerned with style than function.

Kaplan said this shift extends into clothing and even behavior.

And adults and kids alike can accomplish almost anything non-physical on their phones.

“You can order DoorDash on your phone,” Kaplan said. “People just want things to be easier.” 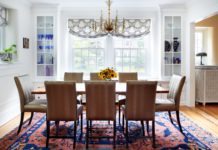