History is often framed as the story of major people and events. But if you have enough artifacts, it also can be presented as a mosaic of everyday experiences.

Reform Congregation Keneseth Israel’s Temple Judea Museum has the artifacts, and now through the end of March it will use them to portray Jewish history as that mosaic.

The museum, which is named for the other Elkins Park synagogue that KI merged with in 1982, often showcases exhibits about specific themes. Its most recent show, in the fall, focused on Jewish summer camps, according to museum director Rita Poley.

But this exhibit, called “Signs of Our Jewish Times,” is a collection of objects that, as Poley explained, does not fit into a narrow theme.

There are pins from Jewish events, the Israeli Army and the Women’s League for Conservative Judaism, among others; there are signs and pictures from Hesch’s, the old Jewish steakhouse owned by Philadelphia entrepreneur Harry Jay Katz; there’s an old sign from Satmar Bakery in New York telling customers that the bakery had no matzah left.

And that’s only a sampling.

“All these things that made up Jewish life,” said Poley, who has run the museum since 1999.

Poley, now in her late 70s, spent her career as an art consultant and museum curator throughout the region. She organized shows at synagogues, schools and even the Philadelphia Museum of Art. She also wrote a column about exhibitions for the Jewish Exponent.

Poley remains a KI member and the driving force behind its Jewish history museum. Though Poley runs the operation, her shows are often the products of generous donations of entire collections, like the Jewish summer camp contribution.

But the “Signs of Our Jewish Times” show is different. This one is about Poley coalescing a bunch of old gems into an exhibit.

A few years ago, Ellen Tilman, an Elkins Park resident who served as KI’s director of library services for 13 years, gave Poley her collection of pins from Women’s League events and activities.

Then, about a year ago, Al Gilens, a Gladwyne resident and a friend of Poley’s, donated his pins from a career in Jewish fundraising. One was from the annual charity walk that the Jewish Community Relations Council used to hold.

At that point, Poley came up with an idea.

“How can we exhibit those pins?” she recalled.

The curator knew she already had a lot of signs in the museum’s collection, too. She realized that the pins and signs together could make for an interesting show.

And then about four months ago, Katz’s estate donated the artifacts from Hesch’s Steakhouse. They included a picture of Katz with Sylvester Stallone holding a Hesch’s menu, as well as a poster of Liza Minnelli against a ticket for a fundraiser at the steakhouse.

“That’s how this collection came together,” Poley said.

Those were the major contributions, but others were just items Poley gathered herself over the years.

She has a campaign poster for former New York Congresswoman Bella Abzug, a Jewish leader in the feminist movement elected to Congress in 1970. The curator bought the poster on eBay for a few bucks.

“One of the first feminist officeholders. She was a real character. So famous in the 1970s and 1980s,” Poley said of Abzug. “When I take it out, people don’t even know who she is.”

Also on eBay for a few bucks, the director bought a corned beef sandwich bag from Bernstein’s Restaurant on the Lower East Side. And, after connecting with an art dealer, she procured an advertisement sign from the first Jewish airport, Palestine Airways, in pre-state Israel.

“I look and see if I can find little treasures and find ways to use them,” Poley said.

The way Poley sees it, if she doesn’t preserve the artifacts, people will forget. They forget anyway, she said.

But the “Signs of Our Times” exhibit is a way to remind them.

Tilman, who contributed the Women’s League pins, said you don’t want to miss it because you’re unlikely to see anything like it again.

“It’s a collection of things that would never otherwise be put together,” she said.

Gilens, who contributed the pins from his fundraising events, believes that no two people will walk through the exhibit and have the same favorite image or display.

“It should create a lot of conversation,” he said.

Admission to the show is free, Poley said. The museum is “generally open business hours and Sunday mornings,” a release said. But people who want to attend are encouraged to contact the synagogue in advance at TJMuseum@kenesethisrael.org or 215-887-8700. 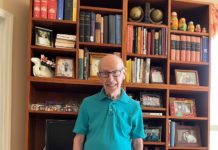 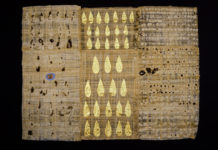 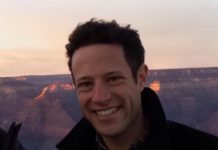