On Jan. 21, a Friday night, Rabbi Howard Alpert and his wife Sarah had eight friends over for dinner at their Boca Raton, Florida, apartment.

The rabbi gave a d’var Torah, and they enjoyed a night of eating and conversing.

Later that night, after their friends left, according to Sarah Alpert, “things went downhill.” Rabbi Alpert, who spent 30 years as CEO of Hillel of Greater Philadelphia, died the next day. He was 70.

Alpert is survived by his wife, their five children and 10 grandchildren.

“He lived in all his years of life,” said Sarah Alpert, his wife of 48 years.

During his career, Rabbi Alpert served Jewish students from the University of Pennsylvania, Temple University and other schools in the region. Hillel of Greater Philadelphia had a general mission to help Jewish collegians at local institutions.

Alpert stepped down from his position in February 2017. In an interview that month with the Jewish Exponent, Alpert explained how he viewed his legacy.

“We tried to create Hillel as a model for a pluralistic, unified community,” the rabbi said. “We may pray different and think different, but our students respect all Jews and forms of expression.”

That impact was real, and it lived on, according to Alpert’s proteges.

Jeremy Winaker is the executive director of the Greater Philly Hillel Network, the successor organization to Hillel of Greater Philadelphia. After rabbinical school, Winaker joined the Hillel staff at the University of Delaware. While there, he networked with Alpert and observed him from afar.

Through that experience, he learned Alpert’s core principles for a Hillel operation: availability to each student and pluralism. It was essential, according to Alpert, for a Jewish campus organization to help all types of young Jews, from the Orthodox to the religiously ambivalent.

Now, Winaker is in Alpert’s town playing a similar role to that of his mentor. And in helping young Jews from Bryn Mawr College, Haverford College and other schools that the Greater Philly Network serves, he is applying the same principles.

“He set an example,” Winaker said.

Rabbi Daniel Levitt is the executive director of Temple University Hillel, another successor to Hillel of Greater Philadelphia. Levitt is in his seventh year working at Temple, and for the first three he served under Alpert.

The director said, more than anything else, he learned from his mentor’s “radical trust in our students.”

Alpert saw students as young people on their own Jewish journeys and as the next generation of Jewish leaders. Therefore, Hillel directors needed to help them lead, make mistakes and learn.

The rabbi’s approach applied to both individual Jewish journeys and communal issues that Jewish collegians wanted to address.

“It is Hillel’s role to give students independence to figure it out for themselves,” Levitt said. “He wanted Hillel to be a student organization. He didn’t want it to be too institutionalized.”

But Levitt credited him with impacting thousands of young Jews who figured out what Judaism meant to them. He also recognized his mentor for hiring, training and helping to shape multiple generations of Hillel staffers.

“Jewish campus life is much stronger in our region thanks to Howard Alpert,” he concluded.

According to that 2017 Exponent story, the rabbi “grew up in New York, attended Queens College and received his rabbinic degree from Yeshiva University.” Before arriving in Philadelphia, he led Hillels at Queens College, the University of Illinois and the Ohio State University.

Daniel Alpert, the rabbi’s 40-year-old son, said there were four decades of students who “were inspired by him and guided by him.”

Alpert’s own five children felt the same way, according to Daniel Alpert and his brother Avi Alpert.

Rabbi Alpert couldn’t attend the women’s-only service. But he loved it as much as the others, according to his sons.

“He was so glad that it was happening,” Daniel Alpert said.

Outside of his religion and career, Rabbi Alpert enjoyed spending time with his wife.

In the final summer of his life, they traveled cross-country in a trailer and went camping.

Later in the year, Rabbi Alpert stunned Sarah Alpert with a surprise 70th birthday party. They went back to their old Lower Merion community and walked into a roomful of friends.

“I didn’t know it was coming,” she said. “He gave a beautiful speech. How much he loved me. How our life was so good.” 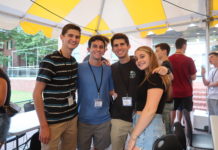 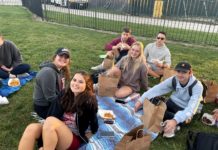 How Bad is Local Campus Antisemitism? 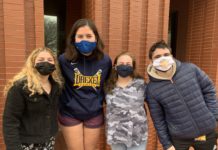 Hillels Reunited and It Feels So Good