The Abrams Hebrew Academy in Yardley is getting three acres of land from Jeffrey Siegel, the developer who owns the property next door.

School leaders want to redevelop the land into a series of flat fields and facilities that can be used for sports teams, after-school programs and recess, according to Head of School Rabbi Ira Budow. Right now, the school has a playground and some fields, but it could use more recreational space, Budow explained.

Soccer fields, basketball courts and a track are all possibilities. The head of school wants to make the fields turf, too, so students can use them in all seasons.

“When it gets cold here and there’s no grass, it sometimes precludes the kids from going outside,” Budow said. “You don’t want children to be inside all the time.”

Siegel is Jewish and a Yardley native. But he has no ties to Abrams and he has lived in New York City for the past 30-plus years. The developer just likes giving back to the Jewish community, he said.

“They are our neighbors,” Siegel added. “This was, frankly, an easy and beautiful opportunity to support this wonderful school.”

In November, the rabbi was looking to expand the school’s outdoor territory, and he contacted the developer’s office.

Siegel’s Yardley property features a long building in which businesses, including a restaurant and software company, rent space. But the building doesn’t take up the entire 19 acres.

So, the rabbi asked the developer if he could buy about five acres in the middle of the property. Siegel was amenable, but the zoning got too complicated.

“We were taking over land right in the middle of his land,” Budow said. “I really gave up on it.”

But on the morning after Thanksgiving, Budow was driving to Baltimore to visit his granddaughters when he got a call from Siegel. The developer asked if the rabbi was in Yardley; he wanted to show the Abrams head his new idea for the land.

When they met the following week, Siegel told Budow that he wanted to offer the piece of his property that was adjacent to the school. It was empty. The school would just have to flatten a slope and do some other work to prepare the fields.

The rabbi thought the land “looked pretty good,” he said.

“Kids don’t have to walk three minutes to get to the other property,” he added. “It’s right there.”

So then, the rabbi asked Siegel how much it would cost.

The developer answered, “It’s not going to cost anything.”

“That was the first time I met the guy,” Budow said.

As Siegel explained it, he came to understand the school’s need through his conversations with the rabbi.

He also knew that, since the property was so big, its outdoor space got a lot of recreational use from tenants and the township community for events. Siegel wanted Abrams’ students to have the same opportunity.

“I don’t think we did anything special,” he said. “We just did our part.”

Now, the Abrams community will handle the rest.

The rabbi mentioned the project to school parents on a December Zoom call and started working with an architect. Budow is figuring out how much it will cost to cut down some trees and level the land.

Brooke Rosenthal, a landscape architect whose daughter is a second-grader at Abrams, is offering her expertise to Budow in an advisory capacity. She is not the primary architect, but she wants to help.

Rosenthal, who has designed parks and plazas, including many in New York, believes it’s important for everyone to spend time outside, especially kids. Throughout the day, the architect explained, students are in school and looking at books or screens.

“To foster relationships through play — being outside helps you do that,” she said. “Being surrounded by trees and nature is a wonderful way for their brains and bodies to be in a different place.”

Rosenthal’s daughter is a first-year student at Abrams. The mother said she already felt like she made the right decision, as Abrams’ teachers all “seem to know my daughter.” But she also said she was excited about what the addition would add to an already healthy school community.

“It’s great that the school is continuing to create more opportunities for the students,” she concluded. 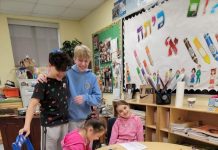 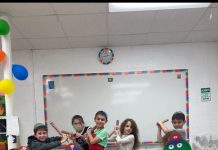 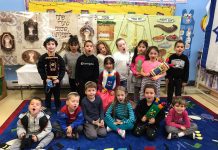