YEREVAN, Armenia — Just outside a remote village two hours’ drive east of Yerevan, in a clearing reachable only by hiking down a steep embankment and crossing a rickety wooden bridge, looms a remarkable sight: a blue metal gate decorated with a Star of David that guards the entrance to one of the world’s most unusual Jewish cemeteries.

Here, in a pastoral setting disturbed only by the chirping of birds and the rushing waters of the Yeghegis River, lie 64 complete tombstones and fragments of others dating from 1266 to 1346. Their inscriptions, written in both Hebrew and Aramaic, have been studied by scholars for years.

Among them is the epitaph of a young Jewish boy that reflects the profound grief of his parents: “Your dead [shall live], corpses shall rise, awake and sing for joy, O dwellers in the dust! For [your dew] is a radiant dew.”

The medieval cemetery, rarely visited these days and in an obvious state of neglect, is nevertheless proof that a Jewish community has long existed and even flourished in Armenia — home of the biblical Noah’s Ark and the world’s first Christian nation.

That community is today among the smallest of the 15 republics that, until 1991, formed the Soviet Union — although it has swelled in recent months, if only temporarily, with Jews fleeing Russia. In addition, even as Israel is home to the oldest Armenian diaspora community and Jerusalem’s Old City boasts an Armenian quarter, Armenia’s relationship with Jews and Israel is difficult, both for historical reasons and because Israel is a key ally of Armenia’s archenemy, Azerbaijan.

Rimma Varzhapetyan, 74, chairs the Yerevan-based Jewish Community of Armenia. Her organization, which has been around for 25 years, occupies a small office on the ground floor of an institute for deaf and mute people. 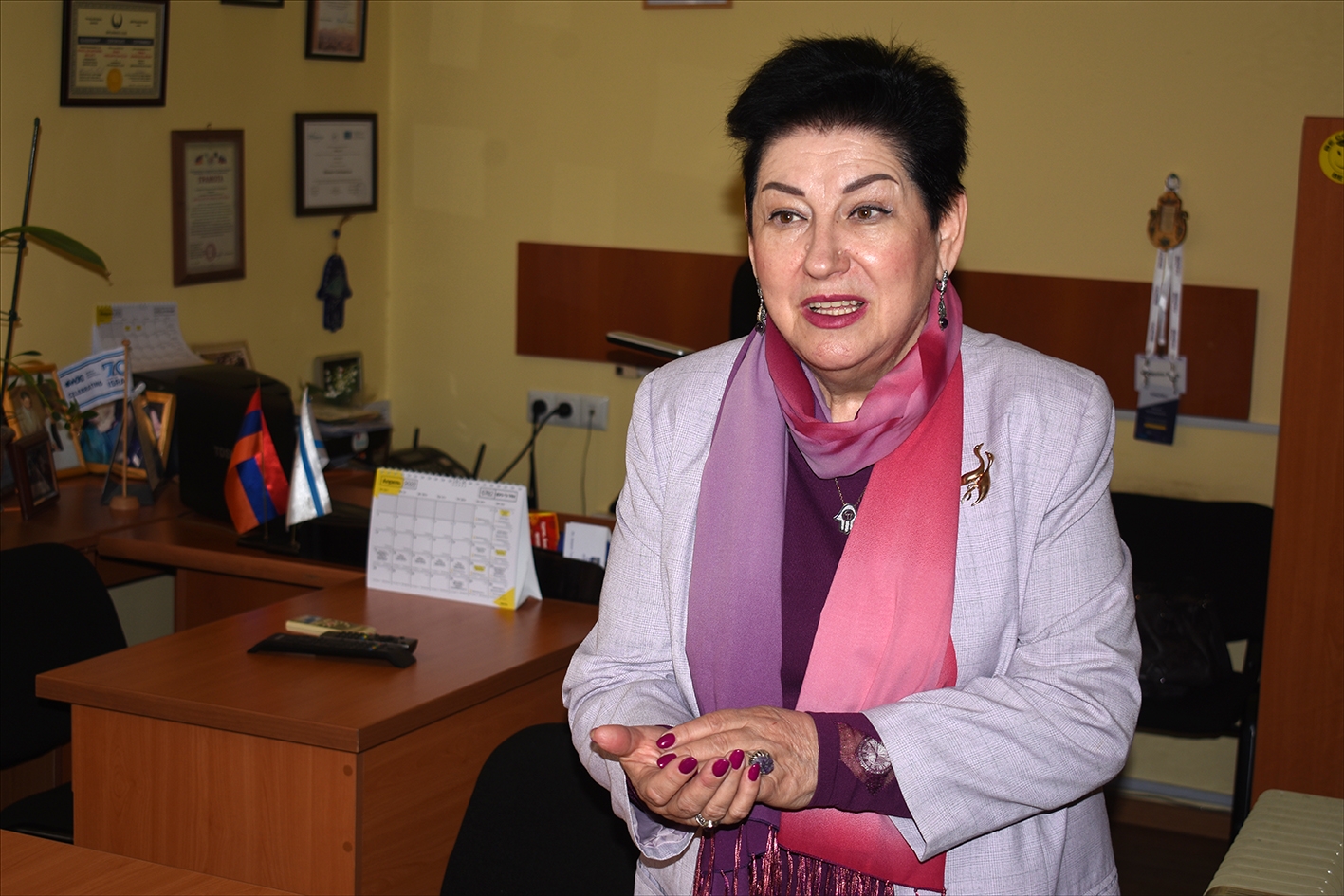 Rimma Varzhapetyan, chair of the Armenian Jewish community, at her Yerevan office. (Larry Luxner via JTA.org)

Varzhapetyan took issue with a 2019 poll by the Pew Research Center, in which 32% of Armenian respondents said they wouldn’t accept Jews as fellow citizens — the highest percentage of any of the 18 European countries included in the survey.

“There is no antisemitism in Armenia,” said the Russian-speaking Varzhapetyan, who was born in Ukraine’s Dnipropetrovsk region but has lived in Armenia for the last 52 years. “It’s true that our economy isn’t that developed, so many Jews — scientists, doctors, journalists and others — made aliyah. Today, there isn’t much religious life, but we do try to celebrate all the Jewish holidays.”

After the Soviet collapse, about 15,000 Armenian Jewish families emigrated to Israel, she said, and these days, the Maryland-size country of about 3 million is home to around 280 Jewish families, though it’s hard to say for sure since the country’s few Jews are mostly intermarried.

Varzhapetyan’s numbers are far more optimistic than those of Rabbi Gershon Burshteyn, the spiritual leader of Yerevan’s Mordechay Navi Jewish Religious Center of Armenia since 1996.

Burshteyn, a locally born Orthodox Jew with a striking resemblance to Tevye the Dairyman — he even speaks with a Yiddish accent — said most Jews here are from families that arrived after World War II from Ukraine, Belarus, Moldova, Uzbekistan and, to a lesser extent, Azerbaijan. 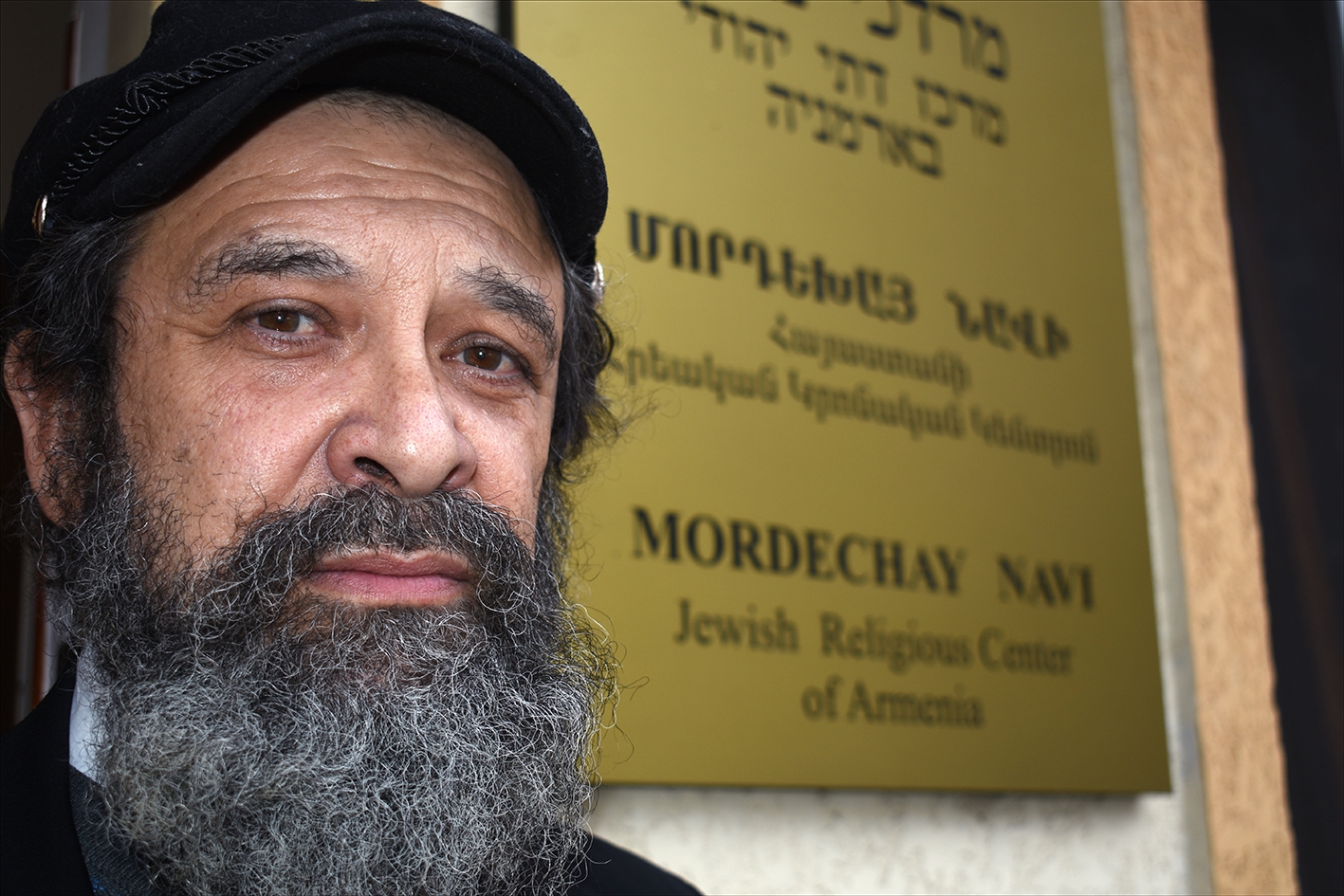 “Before the 1920s, there were two Jewish communities here: one from Poland and one from Iran. At the time, they made up 17% of the population of Yerevan,” said Burshteyn, 60. “But during the Armenian genocide of 1915, there were rumors that the Russian Army would hand Yerevan to the Turks, so the Persian Jews went back to Iran.”

Today, he said, no more than 100 to 200 of Armenia’s 2.9 million inhabitants are Jews; nearly all of them live in Yerevan, except for a handful in Vanadzor, Armenia’s third-largest city. But those numbers are confusing, since at least 500 Armenians would qualify for aliyah under Israel’s 1953 Law of Return, meaning they have at least one Jewish grandparent.

On the other hand, because intermarriage is so prevalent here, only 20 or so Armenians are the offspring of Jewish mothers and fathers, according to Burshteyn.

No more than 25 people attend Shabbat services, and the worshippers are almost all 45 years of age or older. Kosher meat is available thanks to a schochet, or ritual slaughterer, who visits once or twice a month from Tbilisi — the capital of neighboring Georgia — while Rosh Hashanah and Yom Kippur services attract about 100 people. 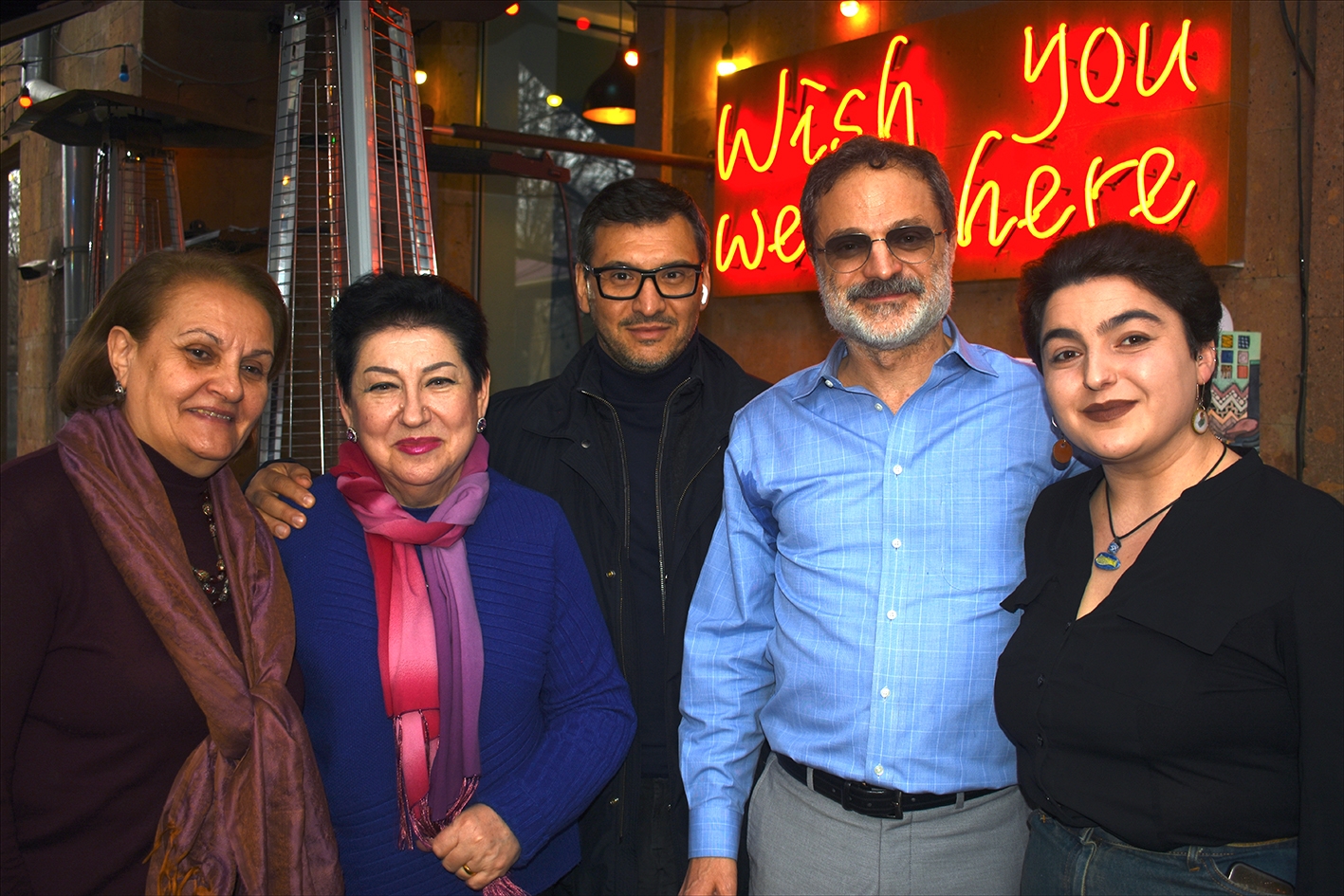 Members of Armenia’s tiny Jewish community gather at a restaurant in Yerevan. (Larry Luxner via JTA.org)

Ida Zilman, 71, is a painter and designer who teaches arts and crafts at a local primary school. Her father, a Ukrainian Jew from Odessa, was seriously wounded while fighting for the Soviet Red Army, and in 1944 he was demobilized and sent to the Caucasus to work as a geologist.

“He helped establish the metallurgy industry in Armenia, and it was here that he met my mom,” said Zilman, a grandmother who attends synagogue services on Jewish holidays. With her late husband, she also visited Israel, where she has a stepsister in Ashdod.

“I adore Israel, but I feel comfortable here in Armenia,” she said. “There are rumors that it’s antisemitic, but that’s not true. When I tell people I’m Jewish, they smile.”

Six years ago, Israel issued a stamp commemorating the famed French-Armenian crooner Charles Aznavour, his parents and his sister Aida, all of whom had sheltered Jews at their home during World War II. In addition, dozens of other Armenians across Europe who protected or saved Jewish lives are honored at Israel’s Yad Vashem Holocaust memorial.

However, those warm feelings are not universal, cautions Ilya Dorfman, a software entrepreneur in his early 50s who lived in Moscow, Toronto, San Francisco and New York before deciding to return to his native Armenia.

“Sometimes, I speak with young people here and they have the idea that Jews are always against Armenians. But it never translates into hatred against the Jews,” he said. “It’s certainly not anything like the antisemitism I felt when I lived in Russia, or even Ukraine after independence.”

Much of the ill will that exists between Armenia and Israel stems from Israel’s extensive military support of oil-rich Azerbaijan, with which Armenia has fought numerous wars over the Nagorno Karabakh region claimed by both former Soviet states. Fighting raged from 1988 to 1994, claiming the lives of 16,000 Azerbaijanis and 4,000 Armenians.

The long-simmering conflict exploded into war again in late 2020. Azerbaijan — led by President Ilham Aliyev and heavily aided by Turkey and Israel — eventually recaptured the 20% of its territory it had lost to Armenia in 1994. (Azerbaijan’s forces included soldiers from that country’s Jewish population of about 8,000.)

“The fact is that Israel supplied weapons to this criminal gangster Aliyev and his brainwashed elite. He gave medals to soldiers who cut off the heads of Armenian and Yazidi soldiers,” Dorfman said. “You wouldn’t believe how many letters we wrote from the Jewish community here exposing what really happened. But in Israel, this is not a very popular subject.”

Artiom Chernamorian, founder of a nonprofit group called Nairi Union of Armenians in Petah Tikva, Israel, says he’s disgusted with official Israeli policy toward the country of his birth — as well as Israel’s alliance with Azerbaijan.

“Israel has so much money for NGOs around the world, but not even one shekel to support the Jewish community of Armenia. It’s a shame,” said Chernamorian, who made aliyah 20 years ago. “Why is Israel — a nation that suffered genocide — helping an Islamic dictator kill Armenians in Nagorno Karabakh? We all know he’s a killer, and Azerbaijan is definitely not a democracy.”

Armenians also deeply resent the fact that Israel refuses to officially recognize the Ottoman slaughter of 1.5 million Armenians in 1915 as a genocide, for fear of offending Turkey — with which it reestablished diplomatic relations this year after a long hiatus. 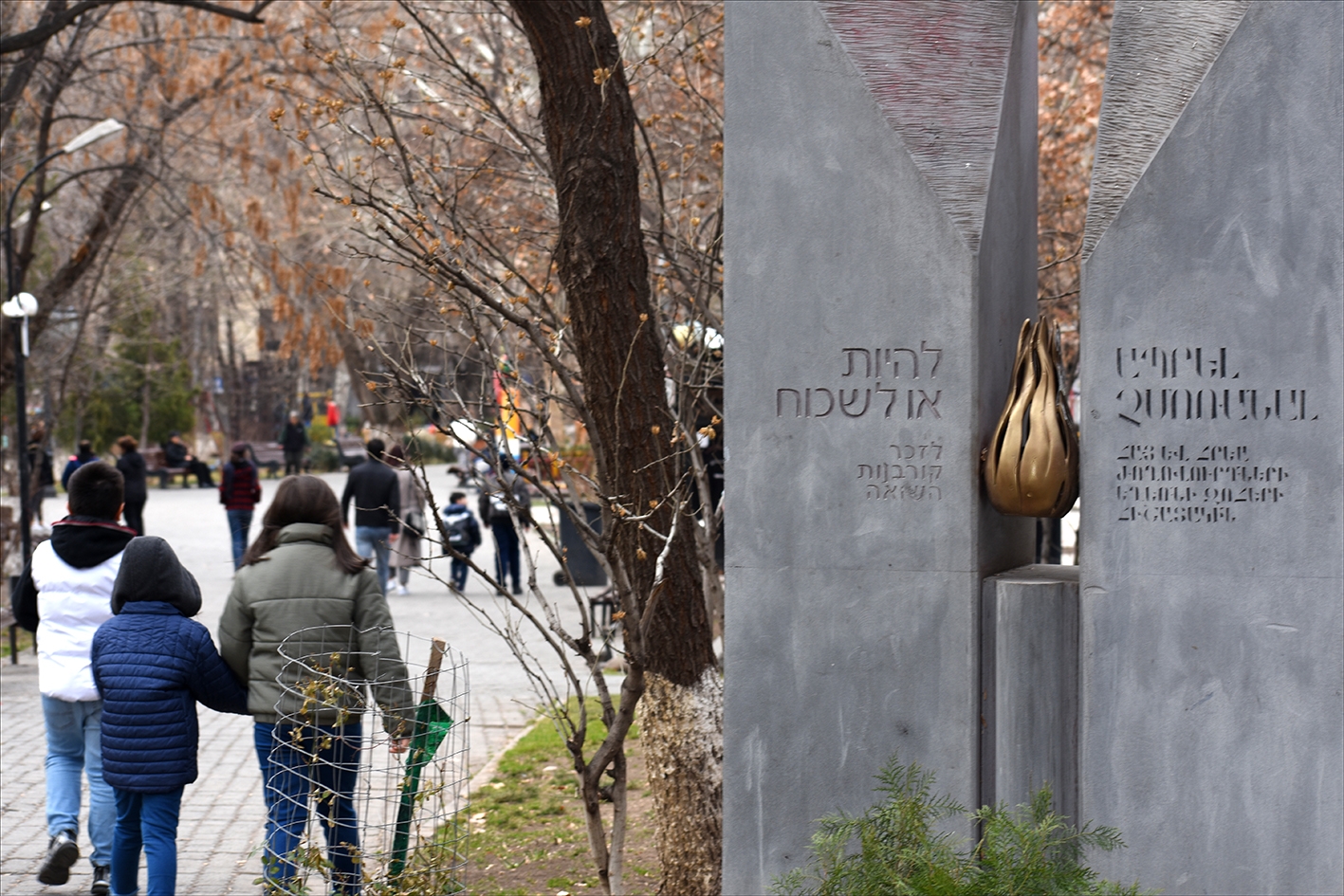 People walk past the Holocaust memorial in Yerevan, which is inscribed in Hebrew and Armenian: “To be or to forget: Remember the victims of the Shoah.” (Larry Luxner via JTA.org)

At the entrance to Yerevan’s Armenian Genocide Memorial Complex, visitors are greeted with a quote from Adolf Hitler, who, one week before his 1939 invasion of Poland, said, “Who, after all, speaks today of the annihilation of the Armenians?”

Since 2013, Chakhmouradian has been Israel’s honorary consul in Yerevan. His office, on the second floor of his family-owned auto dealership, is decorated with framed certificates in Hebrew and Armenian, along with his pet python, which he keeps in an enormous glass tank.

“Our two countries have so much in common,” says Chakhmouradian, who’s not Jewish. “Both are landlocked and surrounded by Muslim countries. And we are both ancient people with modern tragedies — the Armenian genocide of 1915 and the Holocaust. As a consequence, we have large communities abroad, but the Armenian diaspora is even bigger than the Jewish one.”

Chakhmouradian said that in 2018, following a change of government in Armenia, his country finally decided to open an embassy in Tel Aviv, and relations flourished, with high-level visits and an active interparliamentary friendship group. But two years later — when war broke out between Armenia and Azerbaijan — the ambassador was recalled in protest over Israel’s weapons sales to the Baku government.

“In my opinion, that was not the right decision,” he said. “Israel is not the only country selling weapons. For example, Russia is a much bigger ally of Armenia, and they were also selling weapons to both sides.”

Chakhmouradian said nearly 180,000 Israelis visited Georgia in 2019, before the pandemic hit; that same year, Armenia received barely 5,000 tourists. While there are more Israelis with ties to Georgia than Armenia, Chakhmouradian said he was optimistic that the number of tourists to Armenia could increase dramatically with direct flights from Tel Aviv to Yerevan — a flying time of less than two and a half hours.

Things may be looking up, in fact. In April, Israeli president Isaac Herzog met Arman Akopian, Armenia’s new ambassador to Israel, who presented his credentials and signed the official guest book in unusually fluent Hebrew. The two men then discussed the 1,700-year-old history of the Armenian community in Israel and affinities between the two peoples.

In addition, Russia’s invasion of Ukraine and Vladimir Putin’s recent mobilization of reserves to fight that war has led tens of thousands of Russian citizens to emigrate to Armenia, one of the only places where they can still travel easily. That includes at least 450 Jews who have taken up residence in Yerevan, according to Rabbi Burshteyn — dramatically boosting the size of the local Jewish community, even if only temporarily.

And on Oct. 6, Azerbaijan’s Aliyev met informally with Armenian prime minister Nikol Pashinyan and Turkish president Recep Tayyip Erdoğan — marking the first top-level talks between the Turkish and Armenian leaders in decades. That follows Erdoğan’s recent rapprochement with Israel and the resumption of diplomatic ties between Israel and Turkey.

“There’s a huge Armenian presence in the Old City of Jerusalem, and many Armenians want to visit Israel on pilgrimage. But nobody wants to lose a whole day traveling,” Chakhmouradian said. “If there were direct flights, I’m sure some of these tourists could also become businessmen or potential investors. The potential is enormous.”