Lifelong Jewish educator and Rabbi Miriam “Mimi” Ferraro died on Oct. 29 after a two-year battle with colon cancer. She was 59.

Ferraro was both a teacher and a student, serving as the rabbi at Congregation Tiferes B’nai Israel in Warrington since 2015; the education director of Old York Road Temple-Beth Am in Abington from 1996-2015; and was the first doctoral student at Gratz College and a 2017 graduate of the Reconstructionist Rabbinical College in Wyncote.

She also was a hospice chaplain at Abramson Center for Jewish Life, helping patients even when she was a patient herself.

Ferraro’s passion for engaging with her Jewish community was evident: She made chaplain visits and leyned Torah the month before her death.

“It was crazy,” said her daughter Jocelyn Spitz, the eldest of Ferraro’s four children. “[Cancer] didn’t slow her down. She was doing funerals; she was doing weddings … She was just like, ‘I gotta keep on keeping on — I just got to go, just got to do it.’”

After a breast cancer diagnosis in 2014, Ferraro began her rabbinical program at RRC the day after her double mastectomy.

Spitz said she learned “unwavering strength” from her mother, who would talk out loud to herself, repeating the mantras of “I got this,” “I’m going to be OK” and “I’m going to kick it,” throughout her more aggressive colon cancer diagnosis in 2019.

“That’s what she said going into her last surgery on Oct. 29, that morning: ‘I’m gonna kick it,’” Spitz said.

Born Feb. 3, 1962, Ferraro grew up in Melrose Park and attended Cheltenham High School. She attended synagogue every week with her family and was a camper at Camp Ramah.

She received a bachelor’s degree from Temple University in 1984 in music and music therapy; a master’s of arts in Jewish education administration at Gratz College in 1990; and a doctorate in special education at Gratz in 2013.

“She just loved to learn, and she just wanted more,” Spitz said. “And the more knowledge she had, the more she could help others.”

Rabbi Robert Leib, who worked alongside Ferraro at Old York Road Temple-Beth Am for 20 years, said her role as a “tremendous teacher” was most evident in 2004 when Temple-Beth Am merged with neighboring synagogue Temple Beth Torah, which could no longer sustain itself.

Ferraro, Temple-Beth Am’s education director, was tasked with integrating the religious school students from TBT into Temple-Beth Am.

“Regardless of what I had to do to try and accommodate them as best as I could, the TBT families had a profound sense of loss and grief,” Leib said.

Ferraro was able to ensure the new students were welcome.

“We saw tremendous growth under her leadership,” Leib said.

In total, Ferraro oversaw the Jewish education of 450 children at one point.

“She knew every single one of them by name,” Leib said. “That’s no exaggeration.”

However, Spitz said Ferraro loved no children more than her grandchildren and, after the onset of the pandemic, Ferraro’s priorities shifted more toward her own family, Spitz said.

“Family was the No. 1 most important thing to her,” Spitz said.

Even when her health was waning, Ferraro made a staunch effort to spend time with her family.

Spitz’s older son celebrated his first birthday a week before Ferraro’s death. Though she could barely walk, Ferraro committed to being there for the celebration, where she napped on the couch as her family sang “Happy Birthday.”

“Just her being there was enough for her. She just couldn’t miss an opportunity to be with her family and especially her grandkids,” Spitz said. 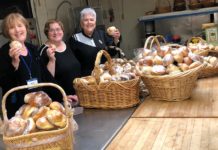 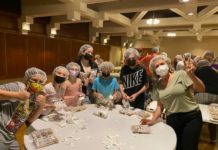 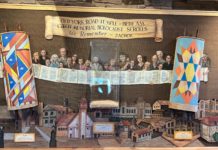