Adam Sandler’s 2019 film with the Safdie Brothers “Uncut Gems” featured a Passover scene with antics that made even the most secular of Jews cringe. But forever loyal to the artist behind “The Chanukah Song,” area Jews have their interests piqued about a new Sandler film, especially one filmed in the City of Brotherly Love.

Sandler was spotted in Center City Philadelphia, South Philadelphia and Jenkintown the week of Sept. 20 shooting “Hustle,” the first major motion picture filmed in the city since the pandemic began.

Though filming for the Netflix-backed movie began in October 2020, Sandler returned to Philadelphia in late August and has since frequented Handel’s Ice Cream in Berwyn, Dan Dan Wayne, Ray’s Happy Birthday Bar and Pat’s King of Steaks in South Philadelphia, among others.

“Honestly I didn’t even realize how famous Adam Sandler was … until I posted a picture [on Instagram], and it just went insanely crazy,” DiPinto said.

Sandler bought a DiPinto guitar for a recording session last time he was in Philadelphia in October 2020.

Anthony Capozzoli, son of Ray’s Happy Birthday Bar owner Lou Capozzoli, rubbed shoulders with Sandler as an extra in two of the film’s scenes, one of which was shot in the South Philadelphia bar.

Capozzoli plays a bartender at Ray’s in the scene, which was transformed into a 76ers bar, complete with everyone on set donning jerseys. In the film, a Sixers game will be played on the bar’s television screens, which, during filming, were fully green.

When 2 a.m. rolled around, some of the well-known cast members started a dance party. Sandler joined in and welcomed in the extras as well.

While on set, Sandler and the film crew treated the extras with the same respect as the big-time actors, Capozzoli said.

In another scene, shot at a playground in Manor College in Jenkintown, Capozzoli was a camp counselor watching a group of young campers observing a basketball scrimmage. The one scene took four days to shoot.

In between takes, Capozzoli said Sandler would talk to the kids, keeping energy levels high during the long days.

“He would come over to make small talk,” Capozzoli said. “He said, ‘Hey guys, I’m a basketball fan as well. I love your Sixers, but I’m more of a Knicks fan.’”

Other area businesses were happy to welcome Sandler.

In order to accommodate Sandler’s pork-free diet, Dan Dan Wayne owners Cat and Kevin Huang designed a chicken-filled soup dumpling — dubbed Sandler’s wonton — and added it to the menu after his visit on Aug. 30.

“Hustle” stars Sandler as Stanley Beren, a past-prime basketball scout who discovers Spanish talent Bo Cruz outside of Madrid and hopes to mold him into a basketball superstar. Queen Latifah and Robert Duvall will star alongside Sandler. Several players from the Sixers are expected to make cameos.

Though no one can guarantee Sandler’s new film will have the same Jewish overtones as “Uncut Gems,” with Jewish filmmaker Jeremiah Zagar, director of the 2018 film “We the Animals” and son of Philadelphia Magic Garden artist Isaiah Zager, at the helm of “Hustle,” Jews can still have hope for some good Jewish representation.

With the film shooting in Center City shortly after the High Holidays, maybe we can bet on a Sukkot scene. 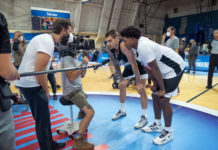 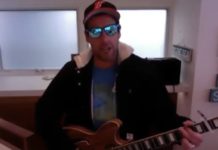 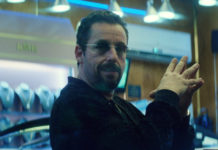