As a gymnast, Fred Turoff tried to make the U.S. Olympic team in 1968, 1972 and 1976. But injuries to his right knee and shoulders prevented him from realizing his dream.

One, Dominick Minicucci, even helped his coach realize the dream that he had long since retired from: making the Olympics.

In 1992, Minicucci qualified for the Summer Olympics in Barcelona as part of the U.S. men’s gymnastics team. The team brought each gymnast’s personal coach to the games as part of the coaching staff, so Turoff went with Minicucci.

The gymnast didn’t medal after making a single mistake, but told Turoff on the floor after his last event, “I’m satisfied with my career.”

The Temple coach was satisfied with his own career, too, he said.

With this year’s Summer Olympics starting July 23 in Tokyo — barring any further COVID-related setbacks — Turoff will be among the billions watching the events on television or via streaming. But unlike most, he knows what it’s like to be there and to participate.

So this past weekend, he shared reflections on the experience, the one he waited almost two decades to enjoy.

What was it like to walk out onto the floor?

Turoff: When you walk into the competition hall and you have all those people watching, and the apparatuses are all up on platforms, it’s a great feeling.
It just makes you smile. All the work you put in to get there is paying off. It’s an uplifting feeling. A feeling of satisfaction.

How did you feel watching Minicucci perform?

Turoff: I was just hoping he would perform as well as he did in practice. I was watching other people perform and saying there’s an awful lot of great gymnasts here. These are the top guys in the world.

It was neat. It just makes you smile. You say, ‘Boy, he does that so well. He makes it look so easy.’

Did you witness any all-time great gymnasts up close?

Turoff: Vitaly Scherbo from the Unified Team. The Soviet Union had broken up. He won the all-around competition. The (Unified Team) men won the team (competition). He won five individual (gold) medals. He was quite the dominant gymnast.

It was seeing a guy that had reached the pinnacle of his sport. He does the hardest stuff and makes it look easy. That’s what a performer aims for: He wants you to enjoy what he’s doing.

Did the experience of coaching make up for not getting there as an athlete?

Turoff: It was just another path. I would have preferred to compete myself. But I did have several international competitive experiences. I was proud to help produce an Olympic gymnast.

I know how hard it is to get to an Olympic team. So the fact that USA Gymnastics sent personal coaches over there to help out with the team was a very nice gesture to acknowledge the work we did.

What else did you do when you were there?

Turoff: I went to see some of the other sports. The diving event was held in a pool that had the city as a backdrop. It was quite a site to see. Watching these guys and girls dive with the city as their background.

I was also going to track competitions and marveling at how fast people move compared to me. Same thing with watching swimming.

How much fun did you have in Barcelona outside of the games?

Turoff: Whenever you go to another country, it’s a good education. The coaches made a point of traveling around and seeing the society. Barcelona is the home of (Antoni) Gaudi, an avant-garde architect. There are a number of buildings there that are really quite striking.

There are also Picasso paintings and sculptures in a Picasso museum. So we made a point of appreciating our time there.

What advice do you have for anyone going to this year’s games in Tokyo?

Turoff: Train well. Keep a clear head. Perform as best you can.
Make sure you see more than just the gym. 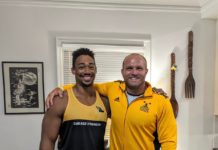