This article originally appeared on Kveller.

This Saturday, June 19, marks the first time that Juneteenth will be observed as a federal holiday. The date — a portmanteau of the words “June” and “nineteenth” — marks the day in 1865 in which enslaved people in Texas were informed of the Emancipation Proclamation, and thus their freedom from slavery.

While the Emancipation Proclamation, an official decree by President Lincoln to end slavery, was put into place in 1863, the majority of enslaved people either remained unaware, uninformed by their enslavers, or still living in the Confederacy at the time. This meant that millions of people who were now supposedly free under the law remained enslaved for weeks, months and even years. The news of emancipation was especially long awaited for those in Galveston, Texas, where the holiday originated in 1866. It has since been celebrated by Texans and African Americans all over the country.

If you’d like to commemorate this holiday through a Jewish lens, here are seven events that you and your family can attend or stream online.

Juneteenth Through the Eyes of Jews of Color: Sharing Stories and Perspectives

The United Synagogue of Conservative Judaism is presenting “Juneteenth Through the Eyes of Jews of Color: Sharing Stories and Perspectives,” an event in which four Jewish guest speakers of color will share their thoughts on the holiday and what it means to both them and the Jewish community.

Join the organization Be’chol Lashon for a Juneteenth Kabbalat Shabbat, in which a variety of hosts — including Rabbi Sandra Lawson, Rabbi Isaiah J. Rothstein, Robin Washington, and many others — will lead services and present a celebration of Juneteenth. Listen to music, join in prayer and learn the history of Juneteenth all while attending Shabbat services!

The event is online and registration is free. It will be held on Friday, June 18, at 5 p.m. ET. For more information, go to this link.

This year, Juneteenth falls on a Saturday, and you can partake in a Juneteenth havdalah service led by Jews for Racial & Economic Justice and their The Jewish Vote initiative. The event will be attended by Maya Wiley, a candidate for New York City mayor endorsed by The Jewish Vote.

This in-person event is on Saturday, June 19, at Grand Army Plaza on Flatbush Ave in Brooklyn, New York, between 6 p.m. and 8 p.m. ET. You can RSVP here.

Not in New York City, or just prefer something virtual? There’s also this virtual Juneteenth havdalah sponsored by the Chicago-based Kol Or Jews of Color Caucus of the Jewish Council on Urban Affairs. This annual event “connects the Jewish struggle for freedom with the Juneteenth holiday that commemorates the abolition of slavery in the United States,” according to the JCUA.

The event takes place on Saturday, June 19, and will start at 8 p.m. ET. Registration can be found at this link.

Another virtual Juneteenth havdalah option is being hosted by the Isaac Agree Downtown Synagogue based in Detroit and the non-profit volunteer organization Repair the World. There will be a discussion on both the importance and history of Juneteenth.

The event will begin on Saturday, June 19, at 8 p.m. ET and you can register for it here.

The Northern Virginia Hebrew Congregation is hosting a Juneteenth Tikkun, in which Torah study is done continuously throughout the night until morning services. It’s a larger part of the anti-racist work the congregation has been doing since the murder of George Floyd, and the event aims to address “the complexity and urgency of this moment.”

This event starts Friday, June 18, at 8:30 p.m. ET and concludes at 6:30 a.m. ET Saturday morning. While registration for the in-person event is closed, you can stream the entire Tikkun on their Youtube channel.

Temple Emanu-El in New York City is hosting Shabbat services on Friday with special guest Jerald Walker, an award-winning author and creative writing professor at Emerson College. Attend services and learn more about what it means to honor Juneteenth.

This event is held on Friday, June 18, at 6 p.m. ET, and will be held both in person and online. You must register online to attend in person services with this link. You can livestream the event directly from their website.

For more resources about Juneteenth — including ways to discuss the holiday with your family — be sure to check out visit this page on the Anti-Defamation League’s web site. 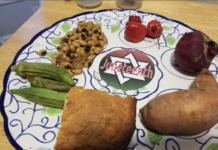 On Juneteenth, Joy and Grief Mingle for Black Jews