Dushman, who was Jewish, died on Saturday, according to the International Olympic Committee.

Dushman drove a tank for the Soviet Army when his division arrived at Auschwitz, the Nazi concentration camp in Poland where more than a million Jews were murdered, on Jan. 27, 1945. Dushman mowed down the camp’s fence with his tank, helping liberate the inmates inside, according to Agence France-Presse.

“We hardly knew anything about Auschwitz,” he said in a 2015 interview with the Süddeutsche Zeitung, a German publication, according to AFP. “They staggered out of the barracks, sat and lay among the dead. Terrible. We threw them all our canned food and immediately went on to hunt down the fascists.”

Dushman was seriously injured in the war but went on to become a renowned fencing coach. He coached the Soviet women’s Olympic fencing team from 1952 to 1988, and several of his fencers won medals.

At the 1972 Summer Olympics in Munich, when 11 Israeli athletes and coaches were murdered by Palestinian terrorists, Dushman was sleeping in lodgings across from the Israeli delegation.

He moved to Austria and later to Munich, where he fenced recreationally until four years ago. Ukrainian Refugees to Join March of Living at Auschwitz 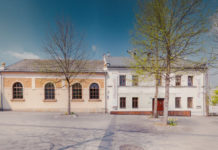