In a year marked by upheaval, Deborah Baer Mozes and the artistic team at Theatre Ariel turned to tradition for inspiration. The result is “Leaves from the Garden,” a collection of nine classic Jewish folk tales that were adapted for Zoom performances.

Working with stories collected in the past by storyteller and folklorist Howard Schwartz, Mozes and Theatre Ariel associate artistic director Jesse Bernstein created a show for audiences 12 and up.

Cast members Lois Abdelmalek, Marissa Barnathan, Hanlon Smith-Dorsey, Nathan Foley and Abul Sesay tell stories that take place in Palestine (as in pre-state Israel), Morocco, Egypt, Turkey and Europe. The characters they play “encounter demons, haunted trees, wise women, and Rabbis, and discover the Story of Us,” according to a press release.

“Our hope is that families will gather around their computers to enjoy the wisdom embedded in these classic tales. After all, who doesn’t like to be told a great story?” said Mozes, founding artistic director of Theatre Ariel.

For Theatre Ariel’s 30th anniversary season, Mozes was keen on returning to the roots of Jewish storytelling. As she was planning the season a few weeks into the pandemic, she turned to her collection of Jewish folktales and fairy tales.

Mozes was struck anew by the anthologies of Schwartz, a professor of English at the University of Missouri-St. Louis whose collections of Jewish folktales have won three National Jewish Book Awards. Mozes, who saw Schwartz speak at an Alliance for Jewish Theatre conference years before, reached out to the professor with a request: Could she have permission to adapt some of the stories he’d collected for the digital stage?

Schwartz was only too happy to agree to the arrangement, and is pleased with the stories that Mozes and Bernstein selected.

“If done well, they should be very impressive,” Schwartz said.

Though that was the extent of his involvement, Mozes and Bernstein both praised Schwartz’s eye for Jewish stories as key to the success of “Leaves from the Garden.”

As Mozes made her way through the stories collected in Schwartz’s 2008 book, “Leaves From the Garden of Eden,” Bernstein came to mind as a potential collaborator. Bernstein, a well-known member of the Philadelphia theater community, previously worked with Theatre Ariel as a director, writer and performer; his original show, “Ethics of the Fathers (aka The Gangster and Grandpa)” debuted with Theatre Ariel in 2019.

Bernstein agreed to work on the show with Mozes, and they each pored over the same collection of stories, whittling down the list to their favorites and consulting with one another. In the end, they picked nine stories that they felt represented the four categories of Jewish stories Schwartz described: folktales, fairy tales, supernatural tales and
mystical tales.

“There’s a sort of journey that emerged from what we’ve picked,” Bernstein said. “I don’t know that it was conscious. But we do sort of start in this world of these familiar kind of love stories, and it slowly evolves into more exciting, more adventurous tales, and then moves into a mystical, almost Kabbalistic-inspired ending.”

Bernstein, who joined Theatre Ariel in his new capacity in January, is particularly excited by the story “Rabbi Naftali’s Trance,” included in “Leaves from the Garden.”

The tonal and thematic variation of the selected stories is rivaled by the variety of the settings. It was important to Mozes and Bernstein to explore stories outside of the shtetl, so to speak, to embrace the fullness of Jewish experience in a way that would be recognizable to audiences without being too inward-looking or familiar.

“We tend to forget that there are Jews and were Jews in just about every corner of the world,” Mozes said, and representing that diversity “was a big objective. And that’s something I’m really excited about, because we fulfilled that objective really well.”

The show runs until April 25, and performances on April 24-25 are part of Theatre Philadelphia’s Philly Theatre Week.

For more information and to purchase tickets, go to theatreariel.org. 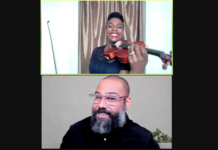