MIAMI — A recent Shabbat dinner at Rabbi Pinny Andrusier’s home in Hallandale, Florida, was memorable for many reasons.

One was that the featured guest was 7 feet tall, towering over the dozens of kids in attendance — the adults, too. Another was that he was a player for South Florida’s favorite NBA team, the Miami Heat.

The guest was Meyers Leonard, who only a few days prior to the Friday-night meal on March 12 had sparked controversy for using an anti-Semitic slur while livestreaming a video game on Twitch.

Leonard, a center who was traded to the Heat in 2019 following seven seasons with the Portland Trail Blazers, was playing the first-person shooter “Call of Duty: Warzone” on March 8 in front of an audience of thousands when he said “F***ing cowards. Don’t f**king snipe at me. You kike bitch.”

The fallout was swift. Leonard was suspended from the Heat indefinitely and fined $50,000 by the NBA. Nine days later the team traded him to the Oklahoma City Thunder, who then waived him after the league’s trade deadline, making his future in the NBA uncertain. FaZe Clan, an esports company Leonard had invested in, also said it would “cut ties” with him over the slur.

It was time to repair the damage. After posting a public apology on Instagram, Leonard and his representatives contacted multiple Jewish organizations to begin his healing process.

Two days after using the slur, Leonard met with Andrusier, the rabbi at the Chabad of Southwest Broward in Hallandale, 18 miles from American Airlines Arena where the Heat play. Andrusier was an obvious first stop on Leonard’s rehabilitation efforts due to his long involvement with the Heat. His connections to the team date back to 1987, when he lit a Hanukkah candle at a game.

“The Heat and the Jewish community have a very strong bond,” Andrusier said.

Each Chanukah, together with Rabbi Chaim Lipskar, the director of Miami’s downtown Chabad house, he organizes the Miami Heat Jewish Heritage Night. Micky Arison, the owner of the Miami Heat, is Jewish. 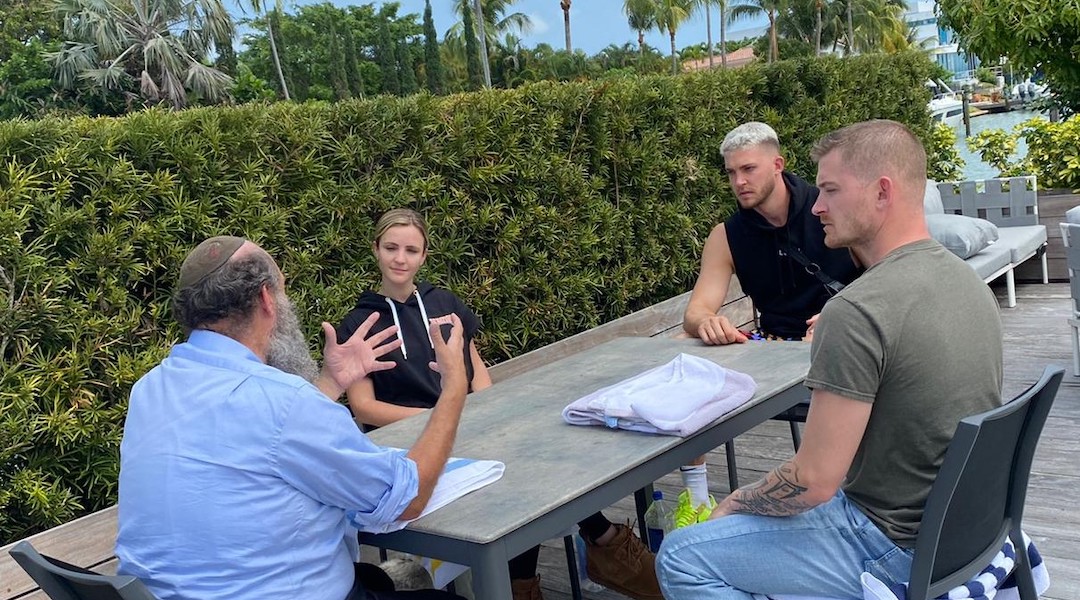 Leonard, at one end of the table, meets with Rabbi Andrusier at his home with his wife, Elle, and brother Bailey. (Chabad of Southwest Broward via JTA.org)

After hours of speaking with Leonard on the phone and meeting at his Chabad, Andrusier had an idea — he would invite him to Shabbat.

“My thinking was that it would be a good idea for him to come and eat and meet Holocaust survivors and to meet children who idolize him,” the rabbi said.

That Friday night, Leonard found himself seated with 30 people from the surrounding Jewish community. Leonard listened to people’s stories, spoke about the incident and took pictures with dozens of kids.

Andrusier was excited for Leonard to meet Michael Kaufman, who was born in a German displaced persons camp after both his parents managed to survive Auschwitz.

“As he told his story, the place was so quiet you could hear a pin drop,” Andrusier said. “Everyone, including Leonard, was crying.”

Beyond the Chabad of Southwest Broward, Leonard met on a Zoom call with representatives of the Anti-Defamation League and the Greater Miami Jewish Federation, which had made a statement condemning his slur.

Josh Sayles, the federation’s director of Jewish Community and Government Relations, said the goal was to connect Leonard with members of the local Jewish community as an opportunity for education.

“Meyers is really interested in putting in the hard work and learning about the Jewish community,” Sayles said.

Though Sayles and his team received many calls in the days immediately following the incident, he said the calls have started to taper off.

“People aren’t talking about it as much anymore,” Sayles said.

Now the federation is in the process of scheduling a tour for Leonard of the Holocaust memorial on Miami Beach and getting him an audience with Jewish students. Next week, Leonard will participate in a Zoom discussion organized by the University of Miami Hillel titled “From Heat to Healing” with Matthew Hiltzik, a producer of the Holocaust documentary film “Paper Clips.”

“We are encouraged by his efforts to educate himself about the Jewish community, antisemitism, and the impact of his words, and that he has matched his apology with concrete actions,” ADL Florida wrote in a statement. “We do not view this as a one-time effort but an ongoing learning process, and urge Leonard to continue this process after his departure from the Miami Heat.”

ADL Florida also called on the video game industry to “improve their content moderation tools and create robust and inclusive policies to address hate on their platforms.”

Even after Leonard was traded, two pro-Israel groups took the opportunity to express support for his apology and the Heat in Miami. StandWithUs, a pro-Israel advocacy group, contracted with its partner organization Artists4Israel to create a local mural with the Heat’s logo on it. The 28- by 20-foot mural reads “We Love The Heat: United Against Antisemitism, Racism & All Hate” underneath the groups’ names.

“Local teens and college students contacted us saying they wanted to do something,” said Roz Rothstein, co-founder and CEO of StandWithUs. “They were asking what they could do to show that they still love the Miami Heat and that they love Meyers Leonard for his apology. They wanted to give him that opportunity to do teshuvah.” 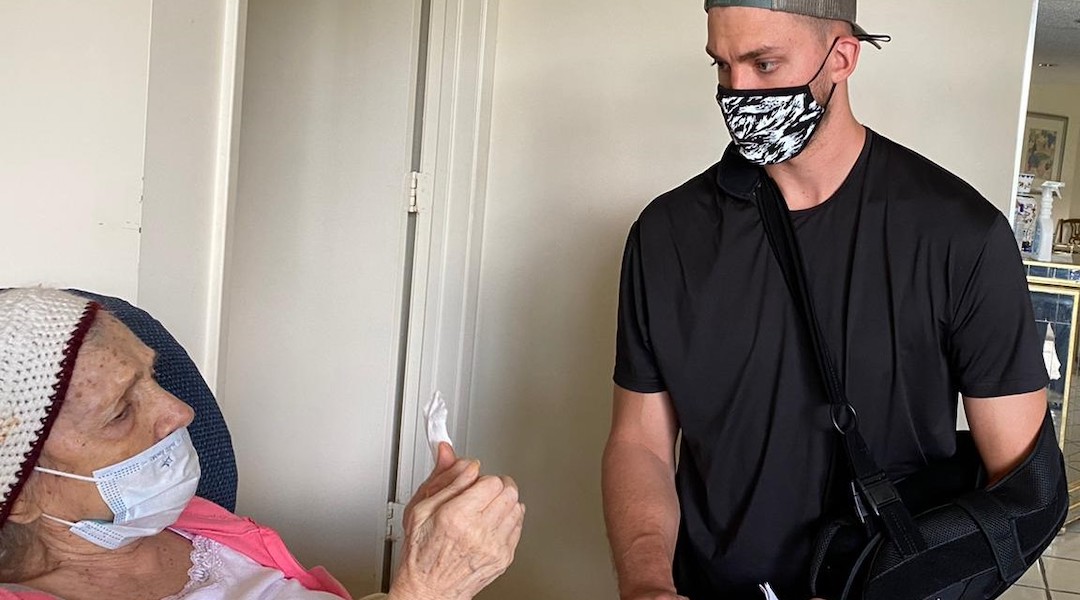 Leonard is among a number of public figures to use anti-Semitic language recently and, like the NBA player, they have undertaken rehabilitation efforts with the Jewish community. Ice Cube and Nick Cannon followed their anti-Semitic statements by meeting with members of Jewish organizations; Rep. Marjorie Taylor Greene visited Orthodox communities in Brooklyn after public fallout stemming from her embrace of anti-Semitic conspiracy theories.

For Deborah Lipstadt, the author of “Antisemitism: Here and Now,” the solutions vary for the different instances of anti-Semitism. What distinguishes the best approach, she said, is the repetition of offenses and the nature of the incident.

“I think the fact that he reached out to a rabbi, went to Shabbat dinner and didn’t immediately alert the press says a lot,” said Lipstadt, an eminent professor of Jewish history and a Holocaust scholar at Emory University. “If he is really trying to figure out what he did wrong, then that is commendable.”

Like Andrusier and Sayles, Lipstadt views Leonard’s openness and dedication as an opportunity.

“I would rather see instances, such as these, result in someone learning about why what they did is so hurtful and offensive and disturbing than just saying ‘OK, he’s gone,’” she said.

In the weeks following Leonard’s video game slur, he has spent over 30 hours learning with Andrusier and working with organizations in the community.

During Passover, Leonard teamed with Andrusier to deliver over 500 packages of matzah, wine and food to Holocaust survivors, older adults and families quarantined at home.

One woman was thrilled when Leonard delivered the package to her door. She’s a huge Heat fan.

“He realizes that he offended and he really wants to show the Jewish community that he never meant them harm and that he’s in solidarity with us, in support and apologetic,” Andrusier said.

“I told Meyers that one beautiful thing about the Jewish people is that we suffered so much, but if someone is truly sincere, we are very forgiving.”