My husband introduced me to a new love — an immersion blender.

I wasn’t in favor of adding another appliance to our small kitchen, but he went ahead and bought one anyway. I have to admit, once I saw how much simpler it was than a standard blender for pureeing, chopping, frothing and whipping small batches of food, I started using this mighty emulsifier daily.

Making creamed soups, sauces, hummus, salad dressings and whipped cream became a snap. The immersion blender broke up canned tomatoes for red sauces, whisked up fluffier scrambled eggs and omelets, and beat the lumps out of sauces. It spun silky pesto, dips and mayonnaise. It produced single portion smoothies and milkshakes. Its most dazzling skill was frothing up milk for lattes and cappuccinos.

But there are a couple of downsides to this versatile gadget. Think soft when using an immersion blender. Hard foods, such as nuts and seeds, or fibrous foods, such as kale, carrots and pineapples are too challenging. While it works wonders for small jobs, its mini blade can’t tackle large quantities of food. Standard blenders and food processors are better suited to tackle sizable jobs.

Most immersion blenders have two attachments: a whisk for whipping cream and frothing milk, and a cutting blade for most other jobs. Newer models have a hooded guard around the cutting blades so people don’t get injured and food doesn’t spatter. It prevents pots and pans from getting nicked.

There are certain acquisitions that are life altering, such as self-cleaning ovens, freezers with icemakers and smart TVs. The immersion blender is one of them.

Latte recipes call for espresso coffee, which forces most people to buy lattes at pricey coffee houses. But lattes can be made at home without the tricky business of brewing espresso. Select strong coffees, such as French roast or Viennese roast. Do not add extra scoops of other varieties to coffee makers as you’ll produce bitter coffee.

Brew the coffee and pour it into an attractive mug.

Place the milk in a pint-sized, microwave-safe measuring cup, such as Pyrex. It is preferable for the measuring cup to have a spout. Heat it in the microwave at full power for 60-90 seconds, until the milk is hot and bubbling at the edges.

Using the whisk attachment of the immersion blender, whip the milk until a thick foam forms. Slowly tip the measuring cup so the milk under the foam flows into the coffee. Spoon the foam on top of the coffee and serve immediately.

Slide the challah slices into the egg mixture. Make sure at least half of the slices are submerged. Every couple of minutes, move the top slices in the pile to the bottom, so every slice gets a good soaking through to the center. Using a thin skewer or a toothpick, gently poke holes in the challah to encourage the slices to absorb the egg mixture.

Move the French toast to a platter and serve immediately. Pour on maple syrup or serve with preserves, if using.

Heat the oil in an 8-inch skillet over a medium flame until warm. Sauté the shallot and garlic until fragrant. Add the asparagus and tomato and sprinkle with salt. Sauté for 1-2 minutes, until sweating. Remove the pan from the flame for 3-5 minutes so the vegetables don’t overcook.

Meanwhile, crack the egg whites into a medium-sized bowl. Using the cutting blade of the immersion blender, whip them until foamy.

Return the pan to a medium-low flame. If the pan is dry, add more olive oil at any time. Pour the whipped egg whites into the pan. Fry until the edges brown and the center is firm.

Cut the leeks in half lengthwise. Under cold running water, fan open the leek halves one at a time until the dirt nestling between the leaves is rinsed out. Dry them on paper towels.

Cut off the dark green part of the leaves and discard. Slice the white and light green parts into thin circles. Peel the potatoes and dice fine. Reserve.

In a large pot, heat the oil and margarine over a medium flame. Add the leeks, shallot and a pinch of salt. Sauté them until wilting and fragrant, about 5 minutes. Add the potatoes, garlic, rosemary and cumin. Sauté it for 5 minutes on a low flame. Add the chicken broth, bay leaves and white pepper.

Raise the flame to medium, until the broth comes to a low simmer. Add more salt, if needed. Simmer for 20 minutes or until the potatoes soften in the center.

Move the pot from the flame. With a slotted spoon, remove the bay leaves and discard. Pour in the lemon juice and coconut milk, including the cream at the top.

Fit the immersion blender with the cutting blade, and whip until pureed. Warm the soup briefly over a medium flame. Serve immediately in a tureen or in bowls. Top with chives, if using. This recipe can be refrigerated or frozen. 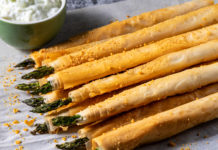 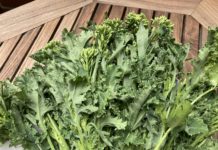