For those who chose to marry amid the pandemic, their special days were often an exercise in miniaturized joy. Miniature parties, miniature ceremonies and miniature guest lists proliferated as the prospect of waiting out the pandemic for wedded bliss proved too much for many.

One upshot of a radically contracted wedding is that many chose to fill roles that would normally go to professionals with friends, family and others in the immediate circle of the betrothed. Consequently, people like Michelle Kagel, a professional officiant and coach for officiants, found themselves flooded with requests for advice during the pandemic. Kagel, a former Hebrew school principal based in Exton, is inundated with questions from people pressed into service as officiants since the pandemic began.

“[There have been] at least eight times where it’s been like, ‘Hey, look, we need to have more than a five-minute conversation,’ and then probably maybe five or six more where people have like, ‘Hey, I just have one question,’” Kagel recalled.

Lynda Simons of Manayunk had a lot of questions when her daughter Jocelyn put off her March 29, 2020 wedding. Would the couple be able to reschedule their beach wedding in Miami? Were the vendors going to give them a hard time? Would the rescheduled date of Feb. 20, 2022 be enough time for the pandemic to subside?

As the pandemic wore on, those questions were answered: yes, no, looking likely. But Jocelyn Simons and her fiancee were restless, quarantined in a remote Massachusetts forest and, eventually, they had a question for her mother: Would she officiate a small wedding composed only of immediate family?

“I was very honored,” she said. “I’m used to some things. I used to do some acting. Speaking wasn’t what I was worried about. I was worried about saying the right thing.”
That’s probably the most commonly reported fear when it comes to officiating, according to Kagel, who both marries and counsels couples with the The Well-Tied Knot and the People’s Therapy Group. For those who aren’t particularly worried by the act of public speaking, true pressure comes from the content itself.

“They want their friends to have the very best,” Kagel said. “They’re so honored that they’ve been asked to do this really sacred, meaningful thing for friends who they deeply care about.”

After obtaining a single-day officiant license through Massachusetts — a “very surprisingly easy procedure,” according to Lynda Simons — the date was set: Feb. 20, 2021. As the day approached, she consulted officiant websites, rabbis and whoever and whatever material she could get her hands on. Three days before the wedding, she’d finally figured out what to say.

“I no longer had trepidation for it,” Lynda Simons said.

But what does one say when, in the midst of the pandemic, as you wed your daughter to her new husband on a snowy trail in the forests of northwestern Massachusetts, the ceremony is interrupted by a group of snowmobile enthusiasts roaring by?

“We waved them away,” Lynda Simons laughed.

In the winter of 2019, Jordan Bravato’s best friend gave him a ring. The friend planned to give his fiancee a different sort of ring in November 2020, and he wanted Bravato to officiate. Bravato, the director of Camp Kef at the Kaiserman JCC, was happy to oblige.

“I was like, ‘I feel like this is this is a more important job than the best man,’” Bravato said.
Soon after, he began preparing for the big day, researching Pennsylvania’s “wacky” rules around officiants. What Bravato found was complicated, varied county to county, and seemed to be some sort of relic of the commonwealth’s Quaker roots. Bravato suggested to his friend that he and his fiancee get legally married elsewhere, and let Bravato’s role be purely ceremonial.

“He did not like that,” Bravato recalled. The friend insisted that Bravato be the one to marry them.

After heroic levels of bureaucratic wrangling, Bravato became an ordained minister online. So, just as he was finishing up, his friend pushed the wedding until August 2021. It seemed that the ordination process for Bravato might be further complicated.

But Bravato’s friends decided it was time to stop shmying around and do the thing. At the beginning of December 2020, they told Bravato they’d like him to officiate a New Year’s Eve wedding.

Getting the license was an adventure; writing the ceremony itself was another can of worms. Fusing together what could only be described as Matrimony Mad Libs, stories about the husband and stories about the couple, Bravato prepared for New Year’s Eve.

It was a rainy night on Bravato’s friend’s parents’ back porch, with the couple, the couple’s parents and Bravato shielded from the storm by white satin curtains.

“And I botched all of it,” Bravato said. “As soon as he and his now-wife started cracking jokes at me, I pretty much forgot everything I had prepared and just kept looking down at my script every minute or so to try to catch my place.”

Still, at the end of the ceremony, he had joined a couple together in the eyes of the law. All’s well that ends well.

Brett Goldman, a consultant and lobbyist in Center City, might want to ask Bravato for some advice. He’s preparing to wed one his best friends this summer, and he’s making the same rounds as Bravato and Simons: reading ceremonies online and calling up rabbi friends.

He’s excited just to be doing something in person, away from Zoom. 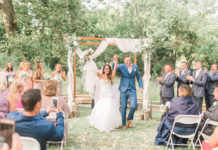 Big Jewish Weddings Are Back in 2022 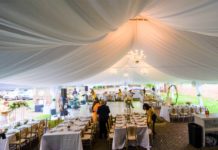 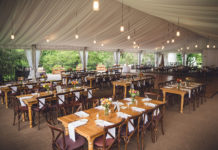