However, as the professor emeritus of history at the Graduate Center of the City University of New York began reading memoirs and interviews with survivors and their children, he realized that most displaced Jews did not come to the United States until the early 1950s, years after the war in Europe ended in 1945.

“Where were they for those four years? What did liberation mean for the Jewish survivors of the Shoah?” Nasaw asked himself. “I learned to my dismay, my disgust, my horror, that the nations of the world refused to open their doors, that the survivors spent three to five years in displaced persons camps in Germany, for the most part, some in Austria, some in Italy, because nowhere on Earth were they welcome.”

Nasaw spoke about the experiences of displaced persons in Europe after World War II at a webinar for the Center for Jewish History in New York on March 24. Atina Grossmann, professor of history in the Faculty of Humanities and Social Sciences at the Cooper Union, interviewed him about what he learned in his research for his book, “The Last Million: Europe’s Displaced Persons from World War to Cold War.”

Nasaw said Allied forces set up displaced persons camps for European refugees, but only a small percentage of residents were Jewish, since most Jewish concentration camp prisoners had been murdered. In 1944, when Germans began to realize they would lose the war, soldiers sped up killings as they raced to hide the evidence of their atrocities from the world.

Initially, Nasaw learned, Jews were held alongside non-Jewish Eastern Europeans who would not return to their homes because they had collaborated with the Nazis and feared retribution. When President Harry Truman realized that Jews were being forced to live among their former tormentors, Americans created separate camps for them.

Only about 50,000 Jews lived in these centers, but that changed in 1946, when approximately 200,000 Polish Jews who had survived by fleeing to the Soviet Union returned to their hometowns, seeking loved ones left behind. Grossman added that the experiences of these Jews, who were often put to hard labor in Central Asia, are frequently left out of Holocaust studies.

Nasaw said Polish Jews who returned to Poland found that their property had been confiscated and violent anti-Semitism had worsened due to Nazi propaganda and wartime resentment.

“This is the tragic irony: The only secure place for the Polish Jews who had survived the war and come back to Poland was in Germany, in displaced persons camps, sometimes behind barbed wire, guarded by the American military,” he said.

In the U.S., legislators resisted letting Jewish refugees into the country. Nasaw said immigration opponents, who knew most of the Jews who survived had lived in the Soviet Union, claimed they were Bolshevik communists who represented a threat to Western civilization, echoing anti-Semitic rhetoric from the Vatican and Adolf Hitler.

In 1948, Congress passed the Displaced Persons Act, which stipulated that any person who entered a displaced persons camp after 1945 was ineligible for a visa. This, Nasaw said, excluded Jewish survivors while making it easier for Nazis and collaborators to enter the United States. Truman knew the act was discriminatory, but his party didn’t have the votes to change it.

Nasaw found that of the 250,000 Jews in displaced persons camps, only 55,000 were able to immigrate to the United States. Many were only able to gain entrance by changing their identification documents and lying on their visa applications to hide the time they spent in the Soviet Union.

An audience member asked Nasaw how the stories of Jewish refugees could be used to help displaced persons today. He said building an immigration policy based on facts, not stereotypes, is key.

“America needs to be, should be, a place of refuge for those who need refuge, for the innocent refugees and displaced persons who have no place else to go, and can’t return,” he said. 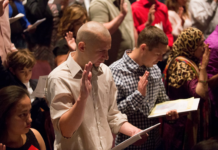 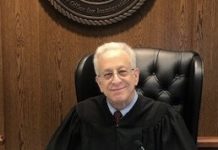